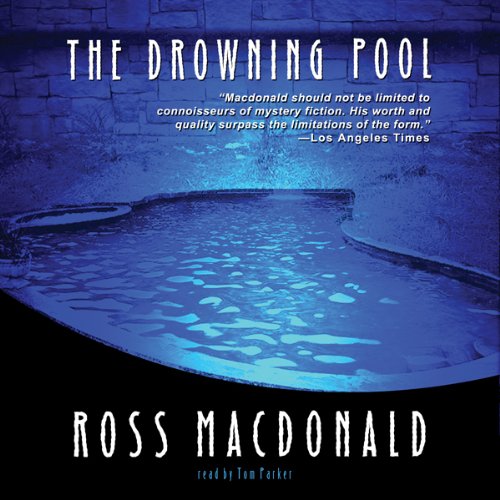 When a millionaire matriarch is found floating face down in the family pool, the prime suspects are her good-for-nothing son and his seductive teenage daughter.

Private investigator Lew Archer takes this case in the L.A. suburbs and encounters a moral wasteland of corporate greed and family hatred - and sufficient motive for a dozen murders.

the reader captures the feel of the noir detective

the story was ok, but to be honest, I listened to it in parts with days in between, so I was more enjoying it as if I was watching an old Humphrey Bogart movie and didn't always follow the plot. Tom Parker does a good job capturing Lew Archer's somewhat sarcastic sense of humor and dry self-awareness.

Maybe a bit contrived here and there but overall engrossing and always entertaining. Definitely recommended.

I’m working through the Audible-included titles of this series, but not in order. After adjusting for the time period, most of the books are good yarns. This one isn’t.

The 2nd scene is a teenage girl being assaulted by a young guy and everyone lets it happen then several people who supposedly support her ask her what she did to bring it on, not why he didn’t stop when she said no. I almost quit it there, and should have. This teen is the worst character of the author’s I’ve run across. She overthinks everything, is portrayed as incredibly smart, but every single thing she does is dumb as a box of hair. She makes no sense and is completely unreal.

Then there’s Mavis. Lew does stupid thing after stupid thing when she’s around, even knowing she is all kinds of not worth it.

The Big Bad Criminals kill time and again, except for our hero Lew, who gets concussed on the regular, but never killed. He’s TSTL and should be dead 3 or 4 times over, just from this installment. The series itself requires some willing suspension of disbelief, in how many bodies turn up around our PI, but this earlier installment is a toxic masculinity fantasy. The characters are almost all unlikeable, including Lew. (The only good thing is that the gay character is merely bad at acting, not actually complicit in the many and sundry crimes, but no one takes a dig at the thugs’s moms for how they turned out, so it’s not nice either.)

The action kicks along, however frustratingly. Everything else, the crafting of the plot, the story arc, prose, detail, and characterizations are all subpar. Don’t read this one unless you’re a completist, and definitely don’t start here to see if you’ll like the author.

Narration: Good job as usual, and I probably wouldn’t have stuck with it had it not been well acted.

Disney for lovers of language.

The descriptions, metaphors, and similes would stop me in my tracks. Excellent story with twists and turns. I have to admit, I was in it for the author's use of figurative language.

Archer is hired to find the writer of a degrading letter. What he gets - three murders and one suicide. Archer at his best.

Ross Macdonald is a great suthor

My daughter and I love the way Ross McDonald describes what's going on. His descriptions are outstanding. he keeps you pulled into the story all the time.

A bit verbose in describing a few scenes. Fortunately not so many times to make it difficult. Twists in story kept me quite interested

Enjoyable. Trying too hard to be Raymond Chandler. Looking forward to working through the series though.