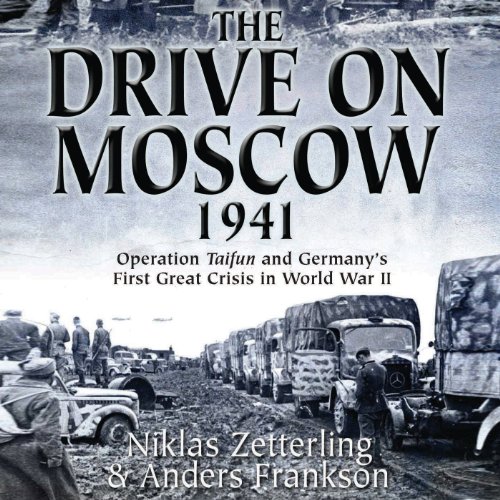 At the end of September 1941, more than a million German soldiers lined up along the frontline just 180 miles west of Moscow. They were well trained, confident, and had good reasons to hope that the war in the East would be over with one last offensive. Facing them was an equally large Soviet force, but whose soldiers were neither as well trained nor as confident. When the Germans struck, disaster soon befell the Soviet defenders. German panzer spearheads cut through enemy defenses and thrust deeply to encircle most of the Soviet soldiers on the approaches to Moscow. Within a few weeks, most of them marched into captivity, where a grim fate awaited them.

Despite the overwhelming initial German success, however, the Soviet capital did not fall. German combat units as well as supply transport were bogged down in mud caused by autumn rains. General Zhukov was called back to Moscow and given the desperate task to recreate defense lines west of Moscow. The mud allowed him time to accomplish this, and when the Germans again began to attack in November, they met stiffer resistance. Even so, they came perilously close to the capital, and if the vicissitudes of weather had cooperated, would have seized it. Though German units were also fighting desperately by now, the Soviet build-up soon exceeded their own.

The Drive on Moscow: Operation Taifun, 1941 is based on numerous archival records, personal diaries, letters, and other sources. It recreates the battle from the perspective of the soldiers as well as the generals. The battle, not fought in isolation, had a crucial role in the overall German strategy in the East, and its outcome reveals why the failure of the German assault on Moscow may well have been true turning point of World War II.

Niklas Zetterling is a researcher at the Swedish Defense College. Along with Anders Frankson he has previously written Kursk 1943: A Statistical Analysis and The Korsun Pocket: The Encirclement and Breakout of a German Army in the East, 1944. Both authors currently live in Sweden.

Add the maps, lose the accents

Would you consider the audio edition of The Drive on Moscow, 1941 to be better than the print version?

No due to absence of maps available for the audio edition.

I really wish narrators of historical nonfiction would not adopt cheesy accents when reading quoted first person accounts. Just read. Save the acting for fiction titles,

What made the experience of listening to The Drive on Moscow, 1941 the most enjoyable?

The story is told in an interesting manner, without sacrificing detail.

Who would you have cast as narrator instead of Dave Courvoisier?

If he just would drop the ridiculous accents on Germans and Russians, there would be no reason to change narrator.

It needs maps downloadable as pdfs. Also the narrator should stop doing accents. But overall enjoyable and informative.

Good review of an important battle

Like most military books I listen too, not having maps available to understand the shape of the battle was challenging. However, the reader did a fine job of pronouncing Russian and German names which helped keep the story clear.

What made the experience of listening to The Drive on Moscow, 1941 the most enjoyable?

The book in its entirety. Parts were weak. Author brought it all together finally.

The author's perspective and reasoning about the role of The Drive on Moscow in WWII.

Would you be willing to try another one of Dave Courvoisier’s performances?

Yes will try, but not looking forward to it. He sounds like an ad reader rather than a book reader.

When the author stopped talking about deep details and spoke about the decision to be at Moscow's door and why Germany lost. His analysis about the role of the weather is brilliant.

You need a map

It was reasonably well-spent

The way in which the distances were always converted to imperial measurements for those who do not think metric was annoying. I don't think that anyone who took the time to listen to the book would have needed the distance conversion.

Could you see The Drive on Moscow, 1941 being made into a movie or a TV series? Who should the stars be?

You really need a map to appreciate the locations and where the battles occurred.