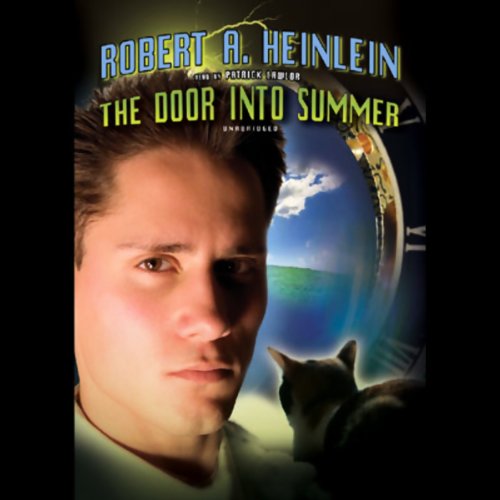 The Door into Summer

Dan Davis, an electronics engineer, had finally made the invention of a lifetime: a household robot that could do almost anything. Wild success was within reach, but then Dan's life was ruined. In a plot to steal his business, his greedy partner and greedier fiancée tricked him into taking the "long sleep": suspended animation for 30 years.

When he awoke in the far different world of A.D. 2000, he made an amazing discovery. And suddenly Dan had the means to travel back in time and get his revenge.

Once again, the author of Stranger in a Strange Land and Starship Troopers displays his genius. The Door into Summer proves why Robert Heinlein's books have sold more than 50 million copies, winning countless awards, and earning him the title of Grand Master of Science Fiction.

"[Heinlein is] one of the grandmasters of science fiction." ( Wall Street Journal)
"Heinlein...has the ability to see technologies just around the bend. That, combined with his outstanding skill as a writer and engineer-inventor, produces books that are often years ahead of their time." ( Philadelphia Inquirer)
"[Heinlein is] not only America's premier writer of speculative fiction but the greatest writer of such fiction in the world. He remains today as a sort of trademark for all that is finest in American imaginative fiction." (Stephen King)

This is a classic Heinlein story of temporal displacement, speculative technology, opinionated exposition, and cat appreciation. I loved the premise of a cutting-edge engineer/inventor in "futuristic" 1970 experiencing future shock in 2001.

I really enjoyed Heinlein's take (in 1956!) on garage engineering, intellectual property, and information technology (which didn't even really exist yet). While some predictions for the future were naturally way-off, others were strikingly close to the mark.

The narration was perfect, and the reader is well-cast for the voice of the main character.

Plus it's just a fun story with a refreshingly positive outlook on the future.

During the golden age of Science Fiction, when the genre transcended its pulp fiction origins to become an established literary form, Robert.A.Hienlein was without question one of the “stars”. An original voice with a wide vision he was also a writer who knew how to tell a story. While many aspects of his work now seem a little dated, such as the technology - ( he was writing in a time that had no preconception of the digital revolution that would begin to transform technology 30 odd years on ), and the social commentary - ( Heinlein was a liberal voice coming of age as a literary force at the cusp of the sexual revolution ). This does not however detract from his mastery of the basic elements of his craft. This particular novel, “The Door into Summer”, finds him at his peak as a story teller, and the pace fairly rips along, keeping the reader totally engaged and on tender hooks throughout. The central character Dan Davis has been thoroughly done over by his scheming fianc?e and his best friend. Seeking solace in escape, he plans to cryogenically freeze himself and awaken to a future free of trouble. Of course nothing turns out the way he expects and his only hope lies in returning to his past by way of new and untried technology. The plot is sublime, and has become a standard template for writers and film makers. The story is infused with all the usual Heinlein elements; talky commentary, glib wisecracks, smart-alecky rapid fire dialogue, nudity and lots of gadgetry. Everything about this story works. Heinlein at his best. A wonderful audio experience, perfectly executed and highly recommended. I loved it!

One of his best

This is by far my favorite short-story (novella?) by Heinlein. Of all his works, only "Moon is a Harsh Mistress" surpasses it. I last read Door Into Summer when I was in my late twenties. Am now almost 40 and it still holds my affection.

One of Heinlein's Best

Let's see... we got a protaganist we can really root for, an evil female gunning for him, time travel, and a ginger ale drinking tom cat. What more could you ask for from one of SF's masters?

Where will my door be?

The preview sounded OK, but the book ended up being awesome. Robert Heinlein is an amazing author, with so many facets. I never know which facet I will get next!

This time, he wrote quite a warm story, about a man and his cat, where the cat is always trying to find summer beyond the next door. To find summer, this couple go through some
awful times, time travel, and very good things to find their door. I totally enjoyed the story.

I think the narrator is top notch. Really, the only character he didn't seem to bond with was Pet;e! But no one is perfect. I was afraid the women would be lame to horrible. But, he
must have many female voices living in his vocal chords! His females are spot on. I would listen to him read a shopping list, cereal box or, God forbid, a speeding ticket!

This book is a family tradition in our family. It is now being handed down to the 3rd generation. The story is one of reflection on how you want to spend your life. How insightful Hienlein was. I shall forever enjoy this book as well as his whole collection.

Heinlein Keeps It Simple Yet TWISTED!

I'm always a sucker for time-travel - - and the concept of cold-sleep (cryo-sleep) to travel into the future is a neat idea - then, using pseudo-science to get the main character BACK in time - - well, it wasn't a very precise explanation, but it worked well-enough as a plot device! But, that is one thing I like about Heinlein - he doesn't overdo the explanation. He tosses out a mostly-credible premise, lays down a patina of fairly plausible science, and then just runs with the main task of character development and interaction! So what if it really wouldn't stand up to the scrutiny of a physicist. It's FICTION!!! And, as a story-teller, Heinlein is beyond reproach! He is able to get you to like (or dislike) his characters without spending excessive time describing their personalities and motivations. Concise! Refreshing!! This was a lovely little story about how to use time-travel to serve up a dish of hot Karma! And, the ending wound down to a typical Heinlein-esque "open-minded" relationship situation that left me with a tiny but of "Hmmm!" But, I'll resist spoilers! Suffice it to say that this should make for a really saucy discussion at book club! As to the narration - it was a decent job! Nothing amazing, but it was a light and fun vocal interpretation without flaws or anything that drew me out of the story. I'd listen to another audiobook read by this narrator!

Heinlein's sardonic wit and engaging characters are on full display in this looping romance. I thoroughly enjoyed it!

Written so long ago, yet still a good read! So Heinlein’s imagination was ahead of our time. He gives the present way more credit than we deserve! Loved Pete!

fantastic future from the past