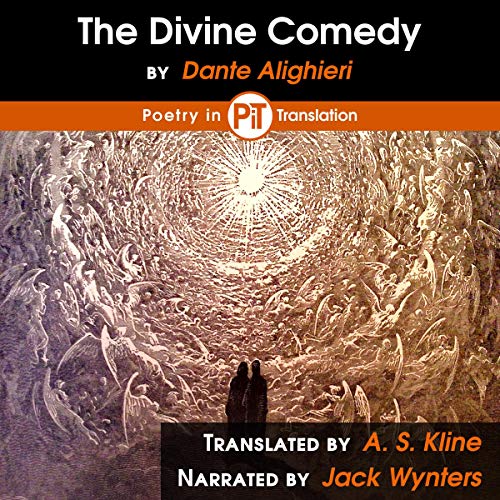 The Divine Comedy is Dante's record of his visionary journey through the triple realms of Hell, Purgatory, and Paradise. This, the first epic of which its author is the protagonist and his individual imaginings the content, weaves together the three threads of classical and Christian history, contemporary Medieval politics and religion, and Dante's own inner life including his love for Beatrice, to create the most complex and highly structured long poem extant.

Through the depths of Hell in the Inferno, and upward along the mountain of Purgatory in the Purgatorio, Dante is guided by Virgil, the great poet of the classical Roman Empire, exploring, as he does so, the political, ethical, and religious issues of his time. Dante, in his own life and in this epic, represents a party of one desirous of purifying the Church on the one hand and the Holy Roman Empire on the other, yet caught between those two great worldly powers and turning to literature to make his voice heard.

From the summit of Purgatory, Dante ascends in the Paradiso, guided by Beatrice, into the celestial Paradise, where love, truth, and beauty intertwine in his great vision of the Christian revelation. Yet the Commedia is essential listening not merely for Christians, poets, and historians but for anyone struggling with issues of morality, the ethical framework of society, and the challenge of living the true life.

I have been pondering why this rendering of one of the high points of Western culture left me as cold as the ninth circle of Hell. T.S. Eliot said this poem would be found to be either irresistibly exciting or incomprehensible, and I'm afraid I'm in the latter camp. The translation may be at fault, often veering into blank gibberish. Surely the Italian original made more sense than this? Another factor is the narration, which frequently made it very hard to work out what was in the poet's voice and what was spoken by his interlocutors, particularly when returning from a break. Then at times the text was comprehensible, but it left absolutely no impression with somebody not conversant with medieval Italian celebrities. It's just not possible to listen to this and juggle a volume of Florentine Who's Who 1200-1300 on your knees at the same time while driving a car. I suppose this epic has a devoted academic readership but releasing it as popular entertainment is totally misguided.