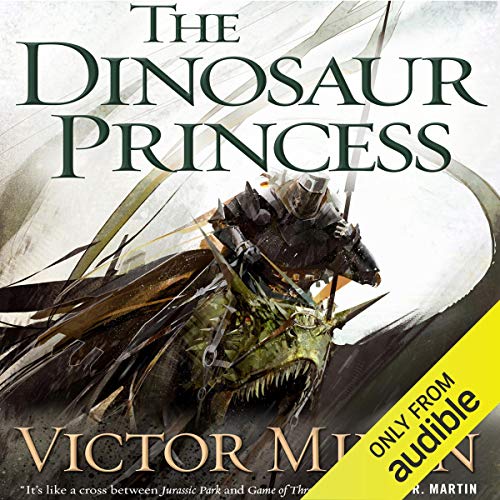 The Dinosaur Princess is a thrilling epic fantasy adventure set in an alternative world of intrigue, beauty, brutality...and dinosaurs.

Welcome to paradise: A primordial world with every species of dinosaur, large and small. And humans who were brought to this world on the whim of the gods. Knights ride into battle on Triceratops; their heroes lead them on T-Rexes.

Karyl Bogomirskiy is one such hero. Once, he held power. Betrayed by those closest to him, he was resurrected by the Fae, magical beings native to the world, who seek to use him in their eternal battle against alien gods. Karyl just wants to be left in peace, reluctant to be anyone's tool, much less a savior.

But the gods have returned to judge their human experiment and to finally rid the planet of the Fae. And while Karyl doesn't feel like a hero, he's humanity's last best hope.

The Dinosaur Princess is the newest epic fantasy adventure set in a world where knights ride armored dinosaurs into battle, hailed by George R. R. Martin as "A cross between Jurassic Park and Game of Thrones."

A Fantastic Listen that Keeps you Inthralled

This entry into the series adds the webs of intrigue that is common in George R. R. Martins Game of Thrones Series; while keeping the story progressing and characters plots progressing.

Have you listened to any of Noah Michael Levine’s other performances before? How does this one compare?

I have listened to his work on the previous two books in this series, he is fantastic about making each character a distinctive voice.

Yes, it kept me engaged the entire time and I didn't want to take my headphones off.

wish there was more books

It was amazing. everything. I loved it. it's a shame the author passed away before finishing them. he was truly an amazing writer.

nice world building in this one.

we get to see more of the world and this book and a deeper plot of the gray angels and the FAE.

The one big thing that ruined this installment for me was the ridiculous amounts of completely unnecessary nudity. I'm not shy about some sex, nudity, or that kind of thing as long as its important to the plot. But this was just way to much... i mean, John Carter, where all of the characters where naked ALL the time, had less graphic nudity and sexualization then this novel.

I feel like the author attempted to take the cultural aspects of nudity and lack of sexual qualms that he wrote into the plot in the first two books, to a ludicrous level for no other reason then he thought it might bring more people to read his book. There are several graphic gay and straight sex scenes in this that had no purpose then to be sexual and sensual. They had no purpose for character building, or plot building purposes.

I feel i just finished a smut novel.

Would you ever listen to anything by Victor Milán again?

Yes, the reader was great.

Which character – as performed by Noah Michael Levine – was your favorite?

I loved the main character, but there was very little of him in this. He's suppose to be some kind of savior, but... he... doesn't, do, anything! I would have loved for the book to have focused on what the hell he was doing in the boarder lands rather then the random and quite frankly stupid plot at the quasi-capitol.

Did The Dinosaur Princess inspire you to do anything?

Uh... odd question, but no. Other then to feel grossed out by the random, completely out of no where sex scene where the flower knights captain some how gets passed several skilled, highly trained, and alert knights on the verge of battle, that snuck into their Orders leaders tent, and then suck him off.....

Gross, pointless, and distracting from the actual few interesting parts of the story.

The author needs to fire his alpha and beta readers, because there was so much useless garbage in this book that was just filler that it made me anger.

Constant plot hammering, and terrible inconsistencies, easily the worst book of the three. I've read all three books three times each, and this one is incredibly frustrating.