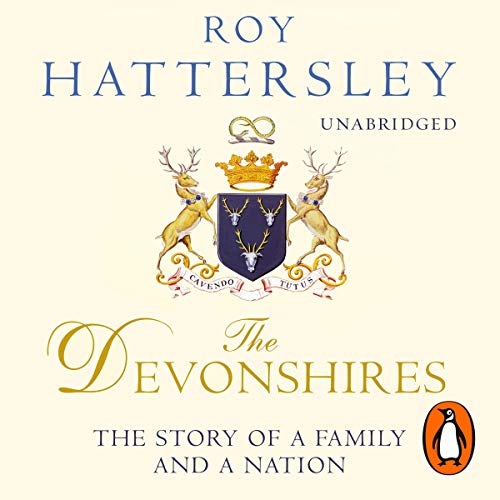 The story of the Cavendish family and the first eight Dukes of Devonshire is the story of England.

From 1381 - when Sir John Cavendish, Lord Chief Justice of England, was killed during the Peasant’s Revolt - to 1906, when the Duke of Devonshire’s resignation brought down the Tory government: the family’s fortunes (and misfortunes) mirrored the life of the nation. The Devonshires is also the story of the huge support networks of servants and labour needed to sustain the supremacy of a family whose accumulated wealth, from the dissolution of the monasteries to the coming of the railways, saw them found ship ports, holiday resorts, scientific laboratories, stud farms and some of the most significant buildings in the land.

For this new history, Hattersley has been given unique access to the archives, based at Chatsworth, the family seat. The Devonshires is as rich and ravishing a read as Hattersley’s best-selling The Edwardians. Whereas previous books on the Devonshires have dealt with one or two key figures, Hattersley gathers the dynasty in one place: an astonishing accumulation of scientists, soldiers, patrons, politicians, house builders, racehorse breeders, philanderers, and powerful women.

The huge personalities in the Devonshire story, and the vibrant details that Hatterley uncovers, make for a lively and illuminating path in to the political, social, and cultural changes that England has endured and enjoyed. Brilliantly researched, this is delicious popular history at its very best.

did not sustain my interest

My interest in this book waned until, some time in the 19th century, I stopped listening. It features a broad range of characters besides the Devonshires, and plenty of background, for example the civil war, so the characters are expertly placed in the setting of their times. But I would have liked more on the Devonshires themselves and less on the high politics and wars in which they were involved. Apart from Bess of Hardwick and the notorious Georgiana, it was the men in each generation who dominated the story - perhaps more on the women would have made the book more enjoyable for me. I think a reader would have to have a high level of interest in English political goings-on to find this book really enjoyable. It is well written and must have taken a huge amount of research so high praise for Roy Hattersey. It is competently read by Michael Jayston but with very little alteration in tone or mood it gets to sound rather boring before very long.