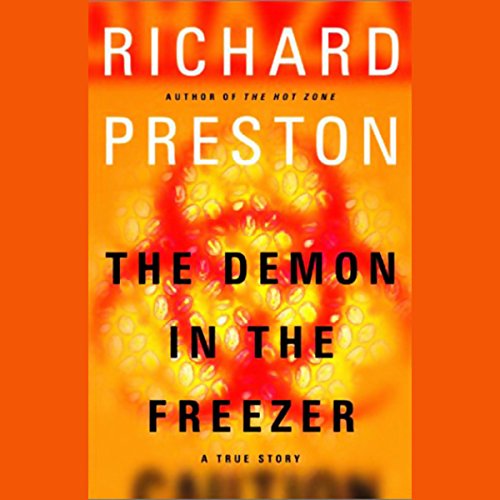 The Demon in the Freezer

“The bard of biological weapons captures the drama of the front lines.” (Richard Danzig, former secretary of the navy)

The first major bioterror event in the United States - the anthrax attacks in October 2001 - was a clarion call for scientists who work with "hot" agents to find ways of protecting civilian populations against biological weapons. In The Demon in the Freezer, his first nonfiction book since The Hot Zone, a number-one New York Times best seller, Richard Preston takes us into the heart of USAMRIID, the United States Army Medical Research Institute of Infectious Diseases at Fort Detrick, Maryland, once the headquarters of the US biological weapons program and now the epicenter of national biodefense.

Peter Jahrling, the top scientist at USAMRIID, a wry virologist who cut his teeth on Ebola, one of the world’s most lethal emerging viruses, has ORCON security clearance that gives him access to top-secret information on bioweapons. His most urgent priority is to develop a drug that will take on smallpox - and win. Eradicated from the planet in 1979, in one of the great triumphs of modern science, the smallpox virus now resides, officially, in only two high-security freezers - at the Centers for Disease Control in Atlanta, and in Siberia, at a Russian virology institute called Vector. But the demon in the freezer has been set loose. It is almost certain that illegal stocks are in the possession of hostile states, including Iraq and North Korea. Jahrling is haunted by the thought that biologists in secret labs are using genetic engineering to create a new superpox virus, a smallpox resistant to all vaccines.

USAMRIID went into a state of Delta Alert on September 11 and activated its emergency response teams when the first anthrax letters were opened in New York and Washington, D.C. Preston reports, in unprecedented detail, on the government's response to the attacks and takes us into the ongoing FBI investigation. His story is based on interviews with top-level FBI agents and with Dr. Steven Hatfill.

Jahrling is leading a team of scientists doing controversial experiments with live smallpox virus at CDC. Preston takes us into the lab where Jahrling is reawakening smallpox and explains, with cool and devastating precision, what may be at stake if his last bold experiment fails.

“Richard Preston has brought us another book that reads like a top-notch thriller. Would that it were fiction. As the movie unfolds in your mind, remember this: It can happen here.” (Laurie Garrett, author of The Coming Plague)

“The Demon in the Freezer is fascinating, frightening, and important. It reads like a thriller, but the demons are real. Richard Preston has a ‘black patent’ on this kind of reporting and storytelling. He is the only writer on the scene who can make the inside story of biological weapons so darkly entertaining. Read this book and pray that its heroes can lock the demon back in the freezer.” (Jonathan Weiner, author of The Beak of the Finch)

If skin sliding off your body in sheets and merging pustules don't bother you, dive in. This is not for the faint of heart or stomach. It does give a clear picture of the effects of anthrax and smallpox, and the results if they were released as a bioweapon.
If nothing else, do what you're mother told you, wash your hands!
Also have a listen to In the Wake of the Plague: The Black Death and the World It Made (Unabridged). One of the interesting points made was that anthrax was present at the time and oftened mistaken for plague. Not that it made a lot of difference to the victim.

Insight in the operating procedure of the CDC and WHO and what a weaponized pathogen has done and can do in the wrong hands. Well performed and reads more like a novel than a tech book. Creditworthy

I got this thinking it was another thriller but, be clear, you're not buying a thriller, this is NON-fiction about horrible biological weapons (mostly anthrax and smallpox). It revisits the national scare in 2001 and goes on to reveal staggeringly terrible truths about some countries which did "weaponize" bacteria and viruses (including the USA). Truth makes it all the more compelling. This scientist turned writer's style allows comprehension of some heavy duty science. There are a few editing errors, just a FEW passages are re-read (NO reason to avoid this book, it is not poorly produced) Most rewind and relisten to their devices anyway to avoid missing key facts.. so no big deal! Well narrated even with a few regional accents (in non fiction) to flesh out the characters. I'd put this on my "must listen" list if one wishes to be well informed about a threat worse than one nuclear bomb could ever be. Even with the mild let down of no "plot" the book is still riveting.

If you only read one terrifying book this year...

Probably not a book to listen to in bed before going to sleep, unless you are truly fearless.

But overall, a well-told true story that is as much about the people behind the effort to irradicate smallpox (and prevent future terrorism) as it is about the disease itself. Very well-researched. It seems that Preston interviewed just about all the key people behind the story over the last few decades.

The most interesting parts of the book for me were the incredible personal stories of how certain seemingly unlikely individuals became involved in different ways.

A couple reasons for a less than perfect rating -- I thought sometimes Preston went overboard on his attention to detail. Like discussing what someone happened to be eating or wearing at non-pivotal moments in the story.

Because the events in fall 2001 occurred while writing the book, Preston seemed compelled to tack on the story line dealing with anthrax. At times it made the book a little disjointed but overall I thought the discussion of anthrax added more than it detracted.

Where can I get a blue space suit?

Okay, now I'm more paranoid than ever that humanity will be ravaged by a super virus. This book is gripping. Not just because the story is true, but because it is extremely well told.

Very Informative and Well Written - but...

Where does The Demon in the Freezer rank among all the audiobooks you’ve listened to so far?

This type of book will only appeal to a specific audience, but overall i'd say its in my top 10 books.

What aspect of Paul Boehmer’s performance would you have changed?

The performance was well done, the audio book editing was horrible. Clearly no one listened to the final product because there are no less than 8 audio edits were the track repeats itself by 4-5 seconds. This throws off the flow of the story and simply irritates the listener. Audible or whomever did the editing should refund every listeners money and appoligise for such poor quality work.

The scariest book I've ever read

Started listening to this book on the same night I watched the new Stephen Kings IT. What I feared when I went to bed was not the movie but what was in this book.

This book kept me on edge almost the whole way through. It is a must read based on the times we are in. I had no idea about the severity of biological warfare and the implications of someone having it. I feel like my eyes have been opened. I would suggest it to everyone.

This is an interesting account of the bio terror attack on the US. There are a lot of names (who cares) and the flow is painfully slow in parts as a result. Information about other countries bio programs was interesting. My Mom is a nurse, so I find biology interesting. If you don't have an interest in what Smallpox can do to a human body, I would suggest skipping this one. The point was: there are bad people out there and Smallpox is a nightmare...

The ghost of the Cold War hangs over this story. This is the tale of smallpox, it's potential use as a bioweapon, it's eradication, and it's preservation as both a tool of medicine and threat to society. This story blends well with the rekindled fear of bioterrorism that emerged following 9/11 and stands as a reminder that all these years later, Amerithrax remains unsolved.

The book is pretty nice. It successfully conveys its message. However, it does sometime go into frustratingly long and pointless details of mundane and completely pointless routines of bio researchers.