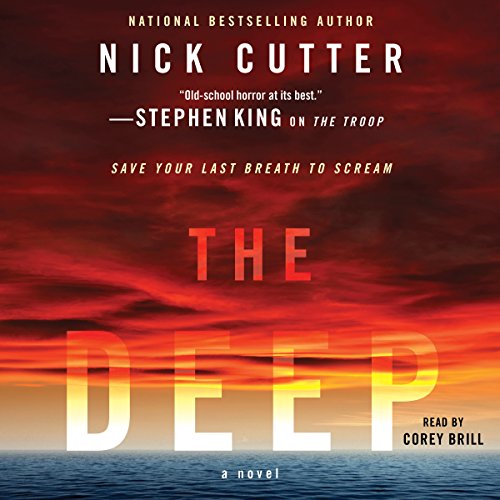 From the acclaimed author of The Troop - which Stephen King raved "scared the hell out of me and I couldn't put it down.... old-school horror at its best" - comes this utterly terrifying novel where The Abyss meets The Shining.

A strange plague called the "Gets" is decimating humanity on a global scale. It causes people to forget - small things at first, like where they left their keys... then the not-so-small things like how to drive, or the letters of the alphabet. Then their bodies forget how to function involuntarily - and there is no cure. But now, far below the surface of the Pacific Ocean, deep in the Marianas Trench, an heretofore unknown substance hailed as "ambrosia" has been discovered - a universal healer, from initial reports. It may just be the key to a universal cure. In order to study this phenomenon, a special research lab, the Trieste, has been built eight miles under the sea's surface. But now the station is incommunicado, and it's up to a brave few to descend through the lightless fathoms in hopes of unraveling the mysteries lurking at those crushing depths - and perhaps to encounter an evil blacker than anything one could possibly imagine.

Part horror, part psychological nightmare, The Deep is a novel that fans of Stephen King and Clive Barker won't want to miss - especially if you're afraid of the dark.

I’m a huge fan of Nick Cutter’s “The Troop,” so i was very excited to read this. The story itself started out strong; unique storyline with excellent writing/narration.

However, it all went downhill once Cutter introduced the lab animals. I don’t understand why anyone would want to listen to a grueling 30 minute-long scene of a dog slowly being tortured to death. And that’s just one of them. So many animals are tortured and killed in some of the worst ways imaginable... it’s just.. messed up.

I’m a lifetime fan of horror. I can literally read/watch anything. This book left me in tears at 2 am, and I sobbed uncontrollably for quite some time afterward. It wasn’t scary—it was cruel. It was traumatizing. I am still not okay and it’s been three days. Although “The Troop” is among one of my favorite novels, this one is being returned immediately.

This story is not really a psychological thriller, the images in it are disgusting and it never lets up. I love horror stories and the scarier the better. But I couldn't finish this one, made me sick to my stomach.

The narrator was very good., but the story left me tuning out, and I struggled to finish listening.

Second part of the book degraded into a B list slasher film. The “scary noise in the dark” troupe became exhausted.

I’ve read The Troop and the entire animal torture thing isn’t scary to me, it’s just depressing. Cutter seems to dwell on it for pages. I hope he doesn’t have any dogs.

Repetitive gore and very weak pay off. Not the Sci-fi horror I expected. Less scary than gross.

"The Abyss meets The Shining" and I would say also meets King's IT, and a quite a bit of Jeff VanderMeer's *weird fiction,* the AreaX: Southern Reach Trilogy. I can see why author Nick Cutter has amassed fans like Stephen King. To open this book, you are under the control of Cutter's chilling narrative in a setting that is completely foreign from what you know. He controls the horror with vivid imagery that (unfortunately for us) imprints itself on your mind. It is a multi-level horror attack that is claustrophobic, psychological, repulsive, and in the end, unfathomable. In other words..no happy ending and chances of some pretty macabre nightmares.

Readers, especially listeners, are at the mercy of Cutter's darkly creative mind as the book descends into the Marianas Trench and the total deprivation of the Trieste. Isolated 8 miles below the sunny surface in a pitch black world, a spider-like conglomerate of tubes form the lab. The lights illuminate only a tiny radius, lighting just parts of foreign creatures that glide in and out of the murky *sea snow* at the bottom of the ocean. The sounds are slurpy, slimey, and schllicky, and your mind does awful things with those sounds. At 8 mi. below, the pressure against the lab makes every sound a horrifying threat; they sound like bowels and digestion of a gigantic beast. It is almost traumatizing.

If not already terrifying, Cutter creates a pair of brothers that survived a very dysfunctional childhood that would be enough to induce nightmares. The older brother is the scientist that has not been heard from since the Trieste went incommunicado. Clayton spent his childhood escaping the abuse by unconscionably experimenting on (dismembering) animals. He is cold and without compassion, purely scientific. Luke has the opposite temperament; a veterinarian and a father that lost a son in a heartbreaking *missing-child* incident that haunts him. (Let's just say the boys have TONS of baggage between them.)

An issue I had with this book is the lack of story about the *Gets,* the initial catalyst for the story. So little is said about the effect on the world and how it motivates the trip down to the Trieste. That could be a whole great book. And for animal lovers...don't expect any mercy from this horror master. There are animals aboard the Trieste, cute, furry, animals and they don't fare well. The narration was spot-on, with great pronunciation of those onomatopoeia words that Cutter uses to make your skin crawl, and things slurp and splat and skitter.

Stephen King once said, “I recognize terror as the finest emotion and so I will try to terrorize the reader. But if I find that I cannot terrify, I will try to horrify, and if I find that I cannot horrify, I'll go for the gross-out. I'm not proud.” The Deep is one of those that swings for the terror, bounces on the horror, and lands square on the gross-out. If that sounds like your kind of read -- enjoy. A little too much like swallowing slugs for me personally, but to you horror fanatics I say...Bon Appétit! You'll love this.

Torturous instead of scary.

In short, The Deep is a book that follows the "torture" rather than "fear" route of horror. Nick Cutter takes depressed, stressed characters, and places them in a hopeless situation within the first few chapters of the book. The rest of the book is then concerned with watching them be repeatedly harmed and taken apart psychologically, in a grueling way that I found thoroughly uninteresting, yet still stressful.

People make comparisons to Stephen King's writing. I am a big King fan, but again, The Deep fell terribly short here. It has all the tropes and themes of a lot of King's books, in a blatant superficial way, but none of the narrative gifts that King uses to bring characters and situations to life.

The passages that I believe were intended to be scary fell flat for me. Clowns. Centipedes. Long fingernails. Lots of descriptions of how scared the main character was involved passages like "felt a spider of fear crawling down his spine" etc. I have read a huge amount of horror, so I might be more desensitized than the average reader of this book.

The only strong emotional content that came through in Cutter's writing was despair, depression and pain. None of the characters were interesting, just a little bit sympathetic at best. It's a parade of bad things happening to people over and over, and animals being explicitly tortured.

This was emphasized by Corey Brill's narration, in which he constantly emoted the voices of the depressed main character, and the assorted broken down or psychotic despairing individuals he encounters. This emotional tone went on for about 10 of the 12 hours of running time. It made me stressed out, but again, not afraid, so there was no thrill or tension release to any of it. It felt like a slog. Speaking again of Brill's narration, I thoroughly disliked the voices he used for the various antagonists of the book. It made a lot of them more grotesque and silly than threatening.

I almost just gave up on the book (something I never do), but I held on until the end to see if there would be any kind of plot development. There was, but not enough to make me happy about spending the credit and sticking around for twelve hours.

Shocked by the good reviews

I loved "The Troop" and actually saved "The Deep" for an upcoming trip. What a disappointment!!! In The Troop, the characters come alive amidst the horror. In The Deep, the characters remain shallow and unbelievable. Not a single one becomes real. And the story, quite frankly, never progresses. Creepy, horrific thing after creepy, horrific thing happens to the protagonists but I, for one, did not care. And don't be deceived by the promise of what this author could do with a plague that makes people forget (two thirds of the publisher's summary devoted to this theme)...the book itself deals with this issue for about as long as the publisher's summary. Perhaps if I had not kept waiting for the book to return to that subject, I would not have been so impatient with the novel. Did the author forget...?

Mr. Cutter is a great craftsman, in total command of his words. The writing is indeed good. Wish the story was better.

Mr. Brill does a phenomenal job with the narration. I probably would not have bothered to finish it were it not for him.

The last two hours is horrible!!

The story starts out really good. The last two hours of the book is horrible. It’s like Nick Cutter ran out of creativity and wrote pure garbage. Was completely disappointed with the this book. The ending was dumb/terrible, not scary, just a waste of time and words. This book was a waste of money!!

This is my personal opinion, I’m not a literary critic.
I found the story quite boring, not scary, a bit disgusting maybe, but that’s it, 12 hours of waiting for the horrific moment that never comes. I wanted to hesr the orher book of the same author but no way jose, I’ll stick to the classic stephen king

people might expect it to be sci-fi horror because of the setup and setting, but it's not. it's psychological horror and it's effective. I was horrified, and entertained. the narrator does a great job, too.