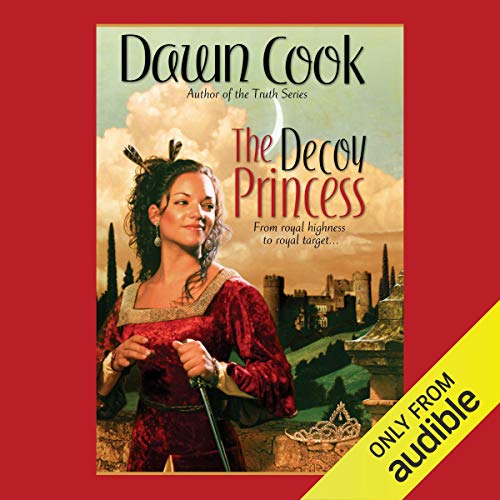 The Princess Contessa of Constenopolie has just learned of her true identity - that of an orphan adopted and raised as a decoy to protect the real princess. But that doesn't make Contessa less of a royal target.

It took a lot to convince me to read this book, but I loved Kim Harrison's other books so much I finally decided to give it a try. I was more than pleasantly surprised. Harrison doesn't disappoint, delivering another saucy no-nonsense female lead who is fun and relatable. The cover and title hints at a bodice ripper romance, but the story itself is about magic, loyalty and finding oneself. The romance is subtle to non-existent, the story being a new adventure through an intriguing world. I highly recommend this novel to any Harrison fan! It is a great listen!

Enjoyable -- Will Listen to Next Book in Series

I admit I selected this audio book because I was experiencing Hollows (written as Kim Harrison) withdrawal. I did not have high expectations since this series predates the Hollows, and really, what could be as good? I was pleasantly surprised.

Cook/Harrison excels at strong female characters with personal integrity and she has an imaginative talent for creating magical worlds. She blends her creative talents with political intrigue, adventure, and various love stories to make quite an entertaining story.

The heroine, Tess, gets a great shock when she finds out she has lived someone else's life, having been raised as a princess decoy to protect the real princess from assassination. And that's just the beginning of many life-altering shocks Tess must absorb.

I was glad to find this story is narrated by Marguerite Gavin who also provides the wonderful voices of the Hollows. Gavin’s dramatic style is especially compatible with Cook’s/Harrison’s strong characters.

While the storyline and characters are not as complex as the Hollows, there is a familiar Rachel Morganesque theme of epic magical power through toxic overload coupled with a strong sense of personal responsibility and morality. Overall, this is an entertaining book and I will definitely listen to the next in the series.

What (not) to expect

Because of the threatening "Red Moon Prophesy," the king and queen of Constanopoli decided to hide their infant daughter from assassins. They send her away and adopt our heroine, Tess, to act as decoy. Tess is loved by her adopted parents, but she is mostly raised by their adviser, Cavinlo, who teaches her not only the ins and outs of the kingdom's workings, but also how to hide and defend herself from the continuous attempts on her life. At age 18 (I think), Tess is ready to marry and rule the kingdom, only to discover that she is not the crown princess. This happens early in book. Later in the book, she discovers that she was groomed to rule not only because she would have to do so if the crown princess was found an murdered, but because Cavinlo is involved with "the players" who rule through cat's paws such as her parents. The players use poison darts like the ones Cavinlo has Tess keep in her hair, disguised as fancy pins.
During a hostile takeover of the capitol, Tess finds out about her birth, and is forced to flee. In order to put everything right, Tess seeks Cavinlo and the real crown princess. With nothing but the clothes on her back, she is forced to use her knowledge of the kingdom to blend in and escape pursuit. Along the way she teems up with a man who she caught cheating at cards. He insists on being a professional cheat, although we suspect that there is more to him than that.
Tess is ordinary-looking other than having long rich-girl hair. Her character seems to fit all of the information above more than it does any stereotype. Although she can be spoiled and drop her title at times, she is tough or compassionate at others, such as when she accepts that she must make decisions that benefit her people not herself. She has the realistic sense of self / sense of confidence that you expect in a young adult.Her emotional responses seem to hit the mark in that they are not too melodramatic or stoic for her age and lifestyle. She is not the insipid selfish slut, nor the naive, bookish good-girl who melts at any compliment, but she has elements of both, which make her more believable and less boring that most characters.
I rarely thought about the narrator when listening. That must mean that she did well.

There is not necessarily magic in this book, but there is a rare magic-like element, such as being able to subtly influence animals when having poison in ones veins.
There is kissing and killing, but no sex, rape, or overtly gory content.
Appropriate for anyone over 12 but not purposeful YA.
Combat often seems to fit into film better than written format but this book uses poison darts and evasion more than swordplay.
This is not a "chick book" although the main character's internal dialogue are realistic for a young woman.
Overall, this has been one of my favorite audible listens.

When I had an opportunity to review Kim Harrison writing YA fantasy under a pseudonym Dawn Cook, I knew I had to take it!

Marguerite Gavin as a narrator was perfect, creating saucy, vibrant characters and keeping it fun. At first glance, The Decoy Princess reads like a lighthearted, easy YA fantasy book with a spoiled, self-entitled princess as a heroine, but don't be fooled. There is darkness here, a fair amount of bloodshed, and some very difficult choices.

Princess Tess is a young, boisterous 20 year-old, who dreams of meeting and marrying her own prince Charming and ruling their country together happily ever after. She sees nothing strange in her teacher raising her tolerance for poison from a young age and instructing her on how to use poisonous darts and a deadly whip (in case of assassins) among other non-princess skills.

Then a potential future husband, prince Garrett, arrives ahead of the schedule, and her parents have no other choice but tell her that she is not an actual princess, - she is her decoy while the real thing grew up in hiding so she won't get assassinated.

Since that announcement everything goes wrong. Tess loses her beloved parents, Prince Charming turns into a raving psycho, and his captain relentlessly chases her across the country in the name of some secret devious political machinations.

Armed with a few darts, in a company of a charming card cheat, Tess needs to use everything she learned over the years to find her teacher with the real princess, and hopefully save her country from the usurper.

Expect sparkling dialogue, secret appreciation of wide, muscly shoulders, nefarious schemes of get rich quick, and some awesome thinking on your feet among an exciting palace takeover.

Tess was a great heroine, and I had nothing but admiration for her stubbornness and clever problem solving decisions. Duncan was a total charmer, and I still don't know what to think of wily Jack... I had some issues with hazy explanations of the great conspiracy, but perhaps everything will get clearer in Princess At Sea, - the next book in this series. Enjoyed it, definitely recommended!

I think one more book to be sure I like the series. Otherwise a promising start. I hate having to add more words

Why the 'Dawn Cook' pseudonym? The Decoy Princess follows the same brief as The Hollows series. Just not as interesting. The "strong" heroine, riddled with self doubt, self pity, and esteem issues. The borderline (and not so borderline) abusive men that attract her. The 1st person narrative that can drift into endless and repetitive inner dialogue-ing (is that a word?). I also have a sort of love-hate thing with the narrator. She does a fabulous job in most areas, even with men's voices - none of the 'Billy Goat Gruff' stuff that some performers resort to. On the other hand, her "upset heroine" are ALWAYS played with hair trigger anger issues, seconds away from a shrieking mental breakdown. It's the same with Rachel Morgan (Hollows), and makes me cringe every single time. Now don't get me wrong - I've read the entire Hollows series (some more than once). Unlike the Hollows and Rachel Morgan though, this story and characters don't have the hook needed to keep me. I don't think I'll go forward with this series.

I was thrilled to see there were other books to read by Kim Harrison, especially after i finished the Rachel Morgan series. I needed something to fill the ache of saying goodbye to Rachel, one of my favorite literary heroes. Tess reminds me of Rachel in some ways, without being the same person. I didn't fall quite as in love with Tess or her world, but it was a good trip to take while I wait for the next project from Kim Harrison.

I always enjoy this author!

Enjoyable light read. I adore the the way M. Gavin reads a story too.
Can't wait to listen to book 2 in this series.

Okay Book But Not My Taste

I love the Hollows series and and I love Margueite Gavin as a narrator so I figured I would give this series a try. I went into it knowing it was Ms. Harrision's earlier work and meant for a younger audience. I also like plenty of books meant for teens/young adults so I assumed I would enjoy it.

It started out good, with secrets and betrayal. And then it just got kind of blah and cliche. The writing was good, but I could see every twist and turn coming from a mile away, and the characters were really predictable.

And as much as I love Ms. Gavin, she has a very husky, mature voice, which oddly seemed to work for Rachel Morgan (the Hollows) but seemed out of place in this adventure. Perhaps because even though the two characters from the series may have been similar in age, Rachel was more self-assured and worldly. She knew her craft and got better. Princess Contessa didn't even know herself, let alone the world around her or place in it. It made the reading very jarring at times and I had to keep reminding myself that Contessa was only 18 or so.

Overall this isn't a bad book, it's a good beach read/listen and would actually be great fantasy for 12-15 teens. But it's fluff with no substance and not something I would read again or keep on my bookshelf.

A romance is a reasonable plot line

What did you love best about The Decoy Princess?

Easy going listen with a reasonable mount of plot line

What other book might you compare The Decoy Princess to and why?

I am not a huge fan of romance, I snagged this one because it was on sale. Not sure who I would compare this too. There is an element of fantasy.

There was a silly phrase used over and over and over in the course of the book. "Chew pit." I have no idea what it is but it was annoying, over used, and the book would be better for having left it out.