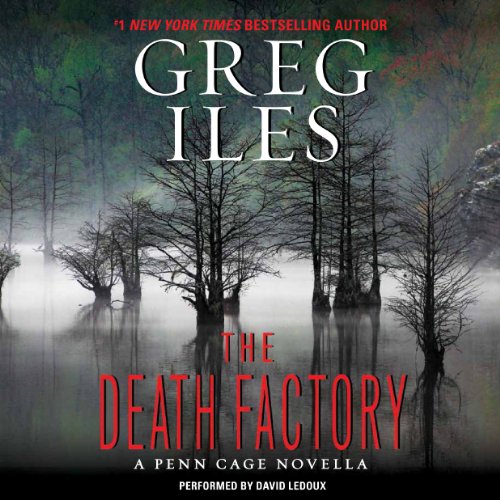 Death is the end, and if a man doesn't speak before it silences him, then his deepest secrets go with him.

When a heart attack sends Penn's father, Tom Cage, to the ER, Tom begs that his son be brought to his side to hear a dying declaration. But when Penn arrives, Tom denies ever making the request - keeping his secrets for another day.

The emergency hurls Penn back to a chilling case in Houston, where he worked in a DA's office known as the "death factory", which sent more killers to death row than any other in America. While Penn cares for his ailing wife, a tormented forensic technician brings him evidence of a crime lab in chaos, throwing past convictions into doubt and begging Penn to prevent an imminent travesty of justice. With the desperation of a man fighting death in his own home, Penn must find a way to bring the machinery of the death factory to a halt.

Included here is an extended sneak preview of Natchez Burning, the first installment in an epic trilogy featuring Penn Cage.

I liked this one, but found it too short for the money.

Some reviewers have panned David compared to Dick Hill. I thought he held his own, and may fit the pace and style of Iles' books better.

Yes, and since it is so short, I almost did.

While this was priced at somewhat of a discount compared to full length books, it still costs a full credit. If it had cost about $5, I would have been completely satisfied.

The narrator has a pleasant enough voice, however he over acts. Nobody talks like that. The story line is still good, too bad this narrator did not edit his overly dramatic reading.

Still I wanted not to miss out on the story since I am invested in the series.

When I learned that Greg Iles had a new novel, Natchez Burning, I eagerly purchased it, but then saw that there was a companion novella, "Penn Cage Book 3.5", and felt I would be missing out on continuity if I didn't purchase that, first. I wasted an entire credit on it, and now I have asked Audible to return that credit to me.

The narrator is blah (JUST shy of offensive), the story sad and meandering and doesn't GO ANYWHERE. As a teaser for the next novel, maybe it helps, but as another reviewer wrote, he enjoyed "Natchez Burning" just fine without it. I wasted a precious credit (waiting for that to be returned) and 3 hours that I can't get back.

Disappointed that it was so short

Loving the Penn Cage series. But felt taken on the price with the 3 hour length. All the other books are 20 plus hours.

This novella seems like just exposition for the next story. I enjoyed how clever of the story was told, through a discussion between Penn and his uncle in the car. It makes me interested in how this story that Penn tells his uncle will be woven into the next novel. The narrator is different from the other novels, and has a hard time distinguishing voices for the different characters so you really have to listen hard to keep the dialogue straight.

Not crazy about the reader

The story fills some timeline gaps - which is nice but I didn't care for the reader. There's little difference from one character's voice to the other and the ONLY hint of southern accent was the pronunciation of Mississippi. "Missippi" is the true southern way to say it but it's odd to hear it in the middle of non-southern dialog.

I'm sorry that I spent the money for a few story parts that could have been weaved into the books.

Hits close to home for a Southern Girl

If you could sum up The Death Factory in three words, what would they be?

What was one of the most memorable moments of The Death Factory?

The revelation that Dr Cage had a past

For a 57 yr old woman born and raised in the South, this is very much a humbling experience. Although fictional, these things happened over and over, again and again. The shame I still feel for my family and how most people in Mississippi never realized much of their everyday language and attitudes were so destructive. But then knowing how dearly my mother loved Tissie, her Mammy. I have to agree with Oprah......some folks are just going to have to die before these deep wounds can be healed.

this short story was the perfect companion to the series and told at the perfect time. by now if you, like myself, are listening to these in order and for the first time, you will be invested in the main characters. this short gives you some well needed background info that makes you love them even more.

End of a great start for me

What disappointed you about The Death Factory?

This was simply an attempt to generate some additional cash flow for the author. Unfortunate the other three novels were superb! 3.5 is an insult and the narrator was terrible, the same narrator follows to finish off the series so I will pass on this. I wonder if the author realizes he has self-destructed.

Would you ever listen to anything by Greg Iles again?

He was just reading words, listen to Dick Hill he made the characters come alive.

What character would you cut from The Death Factory?