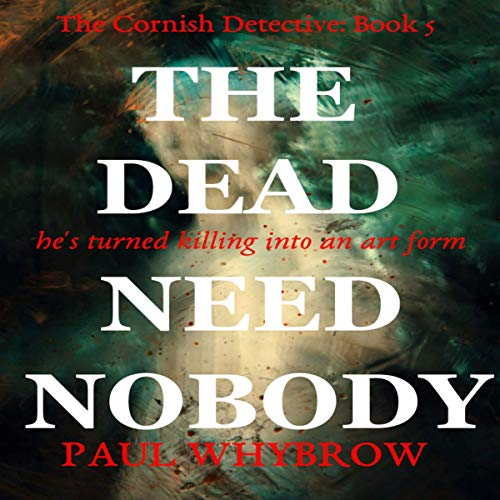 The Dead Need Nobody

Murder victims are like buses - they arrive together. Two corpses are found within minutes of each other in Saint Ives Bay.

DCI Neil Kettle is a keen amateur painter, so the bizarre death of an arts graduate, found underwater encased in a concrete statue, enrages him. And is she linked to a down-on-his-luck Latvian trawlerman washed up on the rocks of Godrevy Island Lighthouse, his throat cut?

Neil is exhausted after running four murder investigations in the previous five years. He was looking forward to a quiet summer, his personal life back on track, after moving house and coming to terms with being a widower. It's the height of the holiday season, the seaside resort and art colony packed with tourists. The chief constable wants the murderer caught.

Gossip flows among artists, resentment of success a gritty lubricant. Questioning painters, sculptors, and art-supplies dealers, the finger of suspicion points at Tobias Taube, an eccentric and elitist art gallery owner. Wildly successful, he's a man from another age, dressing as a Victorian dandy. Unmarried, reclusive, and spiteful, he lives for his art - but would he kill for his art? Neil is repelled by him, and his cunning and great wealth make him a difficult suspect to pin down.

In the meantime, an expert cat burglar is raiding the mansions of the wealthy, taking antiques, vintage guns, jewelery, and paintings to order. He's even stolen from the art gallery owner - and is going back for more.

Bungling twin brothers are less skilled thieves, pulling car park ticket machines from the ground for the money inside. Raising their game, they attack an ATM machine with a bulldozer.

All three thieves have been the clients of an aging prostitute, a tart with a heart of lead and a salty mouth. The cat burglar paid her for sex using a painting stolen from Tobias Taube, thinking it a fake, but she believes it's worth hundreds of thousands. Looking for a way to fund her retirement, she travels to Saint Ives to have the painting valued - by the sinister Tobias Taube.

By coincidence, Neil is in town to visit the Tate Gallery, when he receives forensic confirmation that Taube is the murderer of the arts graduate. He makes for the art gallery.