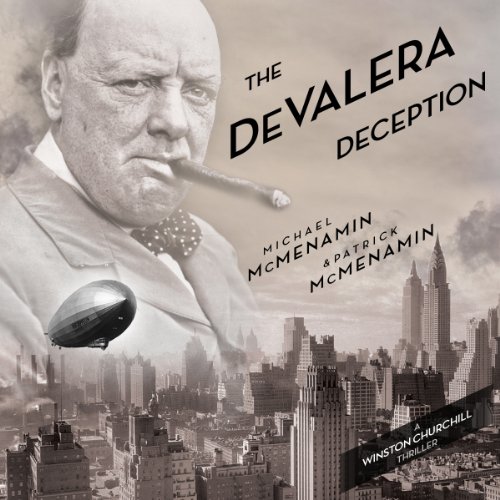 In the summer of 1929, Weimar Germany's secret military agreement in the 1920s with the USSR to evade the Versailles Treaty and develop new weapon systems beyond the Ural Mountains is about to bear fruit. Aided by a shadowy international conspiracy of arms dealers, industrialists, and financiers, both countries are poised to dismember the newly independent Poland created in the aftermath of the Great War. To distract Britain from helping the Poles and risking a new world war, the conspiracy intends to foment a coup d'etat in the Irish Free State, the newest member of the British Commonwealth whose 1922 civil war with the IRA is a fresh memory.

Meanwhile, on the eve of a long holiday in North America after his Tory party lost an election, the former Chancellor of the Exchequer, b>Winston Churchill,receives a clandestine assignment from the new Socialist Prime Minister Ramsay MacDonald. The British Secret Intelligence Service (SIS) has learned the IRA is about to buy a massive amount of arms in the United States to facilitate their coup d'etat in the Irish Free State. MacDonald is sending a team of SIS agents to the United States to investigate and document the IRA's plans. He asks Churchill to use the SIS information to persuade the U.S. President Herbert Hoover to stop the arms from leaving the country.

But a cautious Churchill, wary of anti-Irish Free State sentiments in the SIS, assembles his own private team to conduct a parallel investigation.

The book takes place during Churchill’s 1929 trip to Canada and the United States. Churchill though he is present throughout much of the book, actually plays a relatively minor role. Churchill wrote newspaper articles for William Randolph Hearst during the trip which helped finance the trip along with his fees for speaking engagements. With the name deValera in the title I knew much of the book will be about the IRA and Ireland. Eamon de Valera 1882-1975 was a dominant political figure in the 20th century Ireland. He was one of the leaders for independence. He held multiple terms as head of government when Ireland gained its freedom from Britain. He was in the United States at the same time as Churchill raising funds for Ireland. The authors portrayed him in an antithetical way in the book. The authors used a fictional son of U.S. Representative William Bourke Conkran as the protagonist. Churchill asks Conkran to help track down the financial sources for arms to be supplied to the IRA. More conflict in Ireland is the last thing Britain needs; who fear Germany is allying with Russia to rebuild its economy and military. The book is a combination of creative historical fact, speculation, and political controversy, revealing greed, and power motive influential men in powerful leadership roles in government, industry, finance and media. I had fun trying to sort out the real and the fictional players and situations. I enjoyed the descriptions of the Hearst home (castle) as I have been their numerous times over the years. Some of the key players that are real were Churchill, Hearst, DeValera, and Hoover. The story starts in eastern Canada and proceeds across the country with the majority of the action in California. I enjoyed the description of the trip of the Graf Zeppelin on its world tour. As the time frame in the book moved closer to November I was anxiously awaiting the crash of the stock market, but alas it was not in the book. The Epilogue was helpful in verify some facts. I gather the author will be writing more books along this line using Churchill. It was an enjoyable easy reading book. I give average books a three star. Lee Strayer did a good job narrating the book.