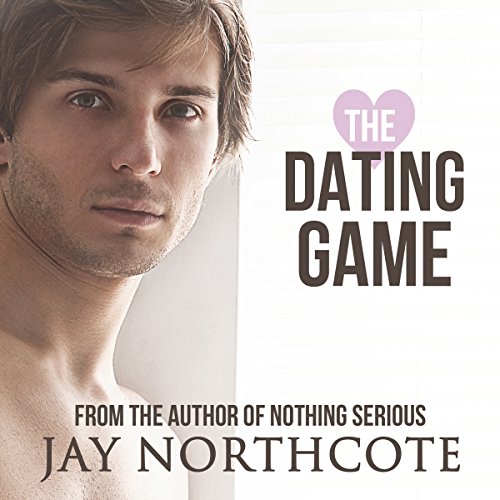 Five sex-free dates. How hard can it be?

When they were at uni, Owen always had a bit of a crush on Nathan. But Nathan was apparently straight, and Owen was too busy with other guys to take his crush seriously.

When Nathan moves back to Bristol after a year away, Owen hears that Nathan has come out of the closet, and he propositions him. Nathan doesn't want to be just another notch on Owen's bedpost, though, so he challenges Owen to prove he can be serious: five dates before they have sex.

Owen doesn't think that sounds too difficult. He's expecting Nathan to find his charms irresistible anyway. But as they grow closer, Owen begins to care more about proving himself to Nathan than he does about getting him into bed.

This is a cute story that left me wanting more. I like Nathan's idea about going out on five dates to get to know Owen even though he already had a crush on him. They had fun but of course there are misunderstandings an hurt feelings. But it all turned out well in the end. The narrator is perfect for this. I hope he is going to narrate the rest of the series.

Not my kind of narrator

This was my first read from the much loved Jay Northcote, and I think I picked a bad one to start with. Now, keep in mind that I listened to the audio edition, and much of my overall opinion will stem from my personal feelings about the narration.

Let's talk about the narrator. Now, I have very particular tastes when it comes to a narrator, and of primary importance to me is a narrator that can do separate voices for each character. I tend to strongly dislike audiobooks where all the voices sound the same, mostly because it makes for a confusing listening experience. That happened to be the case here. Matthew Lloyd Davies did the same (or virtually indistinguishable) voices for all the characters, main and secondary, and I often was confused as to who was talking. It all started to blend together for me, and I had trouble staying engaged with the story.

My other issue with the narrator was his overall reading voice. It was very... theater-y. It sounded sort of like he was narrating a children's book, with his cadence rising and peaking with each sentence, giving it that singsongy feel that I associate with story time at the library. It didn't sound like a person just speaking, which is more how I like my audiobooks to be. If you listen to my all time favorite narrators (James Marsters, Greg Tremblay, Chris Patton (Adrien English series), if we are just talking male narrators), you'd notice that they all give different flavors to their characters. I wish I got more of that here.

In terms of the story, I thought it was cute but I felt my attention wavering at times. It wasn't a high energy story, and combined with a narration that wasn't working for me, I feel like I wasn't able to grasp what everyone else loves about this book.

I have another Jay Northcote audiobook ready to roll, so I hope with a different narration style I'll be able to see what all the fuss is about. However, this one felt lackluster for me.

**Copy provided by the author in exchange for an honest review**

Love the narrator and the story

Owen has always been out and proud, at least since college, and that’s when he first met Nate. Nate was “straight” through college, but he’d noticed Owen, and sublimated that interest, back in college, as well. Later, now that Nate is finally being true to himself, Owen wants to see if reality is as hot as the fantasy. But Nate doesn’t do casual relationships and that’s all Owen knows.

On a lark, Nate offers to have sex with Owen, but only if Owen will agree to five sexless dates first. Surprising them both, Owen agrees.

At first Owen is merely placating Nate, biding his time, proving that he can do “dating” as well as the next guy. But it doesn’t take long for things to get “real” and suddenly Owen is looking forward to each new date without worrying about trying to get in Nate’s pants.

Meanwhile Nate is falling for Owen, but positive that Owen will never settle down with just one guy and certainly not him.

After a few fairly minor hiccups, the two manage to make it through date five only to find that what started as a drunken bet has developed into something very real and both end up very happy with the results.

What a sweet, fun, fantastic read! Jay has given us another winner!

Both characters are very likable, their emotions are sweet and straight-forward, their romance both hot yet touching. Neither has a boat-load of angst to overcome and the main hurdle in this story is mostly one of self-perception. Owen doesn’t see himself as a “boyfriend” type and Nate isn’t sure of his appeal.

I really enjoyed the old-fashioned “getting to know you” dates these boys went on and enjoyed the sexual tension right along side them. Sure the sexual tension and flirting was there, keeping the steam level high, but since the entire point was to wait for the sex “to mean something” you know (or at least assume) that each encounter isn’t going to end up in the sack. It was refreshing! It made their parting kisses that much sweeter and more meaningful (both to the boys and the reader!).

Jay isn’t afraid to be “British” and her dialog is full of British sayings and the boys travel through the country giving a taste of the locale as well. I loved the unique phrases, even something as mundane as an all you can eat buffet (an eat-all-you-can buffet) or kissing (snogging) or push-ups (press-ups) take on an international flavor and bring another interesting quality to the story.

The secondary characters are fun as well. Simon, Jack and Kirsty are all well developed and help us to understand our MCs all the better while adding more humor to the mix.

I was really glad that a British narrator did this audiobook, I think that adds to the UK flavor Jay Northcote sets up in her books. I liked him well enough, I thought that sometimes I could have used more variation in the voicings and maybe a little more raunch or emotion… but I really liked it.

Wonderful, well-written story with a very clear narrator. It was an interesting pick for my first audiobook but I loved the story when I read it the first time and then was lucky enough to win a copy of the audiobook.

I definitely recommend this for the M/M lover looking for a quick read/listen!

Nicely written and performed in. Story that is warmly and sensitively presented. What. A different world we face today. This story is honestly presented and satisfyingly presented.

The narration fell a bit flat for me. I enjoyed the voices he used for Owen and Nathan, but the supporting character's voices either blended together or sounded disinterested, which didn't fit the upbeat and fun nature of the story. His pacing was slow, as if he was pronouncing each word very carefully. The performance wasn't terrible, I simply didn't feel it was a good fit overall..

Now the story, that's a different matter entirely. Having read it before listening to the audible version I knew I was getting a fun filled romantic comedy, so I was surprised to find myself shedding a tear or two at the end. Owen's transformation from loveable tart to a man in love is touching. Nathan simple brings out the best in Owen.

A complimentary copy was provided to Carly's Book Reviews by the author for review purposes.

This was a sweet story

Awe! I truly enjoyed this sweet little entertaining tale. The main characters were both likable and worthy of each other. Great story.

Such a sweet story

This story makes me long for such a wonderful connection in my life. This is big R romance to say the least.

The narration held my interest, but the main characters sounded the same and their individual personalities weren't distinguishable beyond Owen starting out as a horn dog and Nathan wanting a deeper relationship. I get that Owen's perspective changed when he started falling for Nathan, but I didn't feel any warm fuzzies from this couple.

This is the perfect book for a cold and rainy afternoon or if you're just in the mood for something sweet.
The Dating Game combines great characters, a perfect mix of humour, fluff and hot m/m action. It'll also make you want to visit the places Nathan and Owen went to.

I've read the ebook before, so the story itself wasn't new to me and I already "knew" Owen and Nathan. I had high expectations for the narrator to do a good job bringing them to live/giving them a voice. And I can honestly say, that Matthew Lloyd Davies exceeded my expectations. His voice/the british accent was just perfect for this book since it's set in the UK and Owen and Nathan are british themselves.
He did a seriously amazing job narrating The Dating Game. Absolutely loved it and I would definitely recommend the audio book!