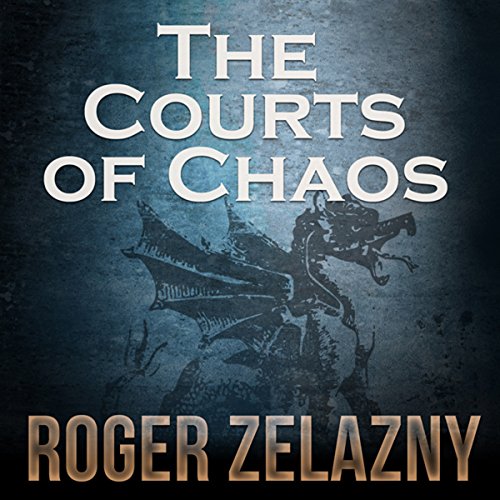 The Courts of Chaos

The Courts of Chaos

The Courts of Chaos is the fifth book of The Chronicles of Amber; an epic fantasy series written by six-time Hugo Award winning and three-time Nebula Award winning author, Roger Zelazny.

In book five, 2012 Audie Award nominee Alessandro Juliani completes his reading of the Corwin Cycle, expertly narrating the first five novels of the series and bringing the world of Amber to life.

As the first cycle is brought to a close, Corwin finds his world dissolving around him when his father Oberon, disguised as Corwin's friend, steals the Jewel of Judgment so that he may defeat the evil Brand.

The dancer and the dance.

&quot;Sometimes it's damned hard to tell the dancer from the dance.&quot;
- Roger Zelazny, Coruts of Chaos

So, this isn't the bottom of the first five books in the 'Chronicles of Amber'. Actually, of the five books that make up the Corwin cycle (Books 1-5), it might be my favorite (so 3.5 ✷?). I haven't been impressed by the five enough to rush soon into the Merlin cycle (Books 6-10). I'll probably get there. I own all ten (The Great Book of Amber), but other books from other favorite authors remain unread and unless there is a sign, symbol, or signal somewhere that suggest that these later books will suddenly jump higher in my esteem, I'm finished for 2017 with Zelazny.

The Courts of Chaos did produce a couple items I did enjoy, sort of:

1. A Zen, futilitarianst crow saying such things as: &quot;You see, we are hatched and we drift on the surface of events. Sometimes, we feel like we actually influence things, and this gives rise to striving. This is a big mistake, because it creates desires and builds up a false ego when just being should be enough.&quot; Da FA?

2. Courtly dancers, treading to the slow measures of invisible musicians, that appear to be an allusion to the painting Dance to the Music of Time by Nicolas Poussin: &quot;They dance to celebrate your passage. They are not mortals but the spirits of Time. They began this foolish show when you entered the valley.&quot; Um, OK?

Anyway, the things I just gently mocked above are also probably WHY I give this an extra 1/2 ✷. That might make sense, or may not. I'm not going to strive to hard to explain.

the use of falsetto for female voices is not recommended. but this is done in many books. has to be a better way.

Now I recall why I have no memory of this final installment to an otherwise memorable series: this could have been condensed to10 pages and been appended to The Hand of Oberon. Literally nothing revealed or added to further the story. I still have my original copies of all 5 books! So much great material: trumps, shadow, Amber, Pattern, political intrigue, twists and turns.

Save your money, when done with Oberon, just ask, and I will tell you in under a minute how it ends!

The best of the first five

Kinda reminds me of someone I once knew. I love the whole series and wish someone had the wherewithal to make movies based upon them.

Enjoyed all the books in the Chronicles of Amber

Fantastic! Just like all the other books in the series. The voice actors do a wonderful job as well

the story has a decent ending. I am glad I read through them and did enjoy them. it would be hard for me to recommend them with so many other 4 and 5 start books available.

I loved it. The narrator is so good. I can actually distinguish the characters by the voices that he gives to each one. Each character has a very distinguishable voice. I really enjoyed listening to the first five books with him narrating

this is one of my favorite book series and it seems that many other authors have drawn from the content. the narrator does an excellent job personally I feel it's one of the best jobs with the different voices for characters.

My most precious chronicles

My most precious chronicles With a nice performance.
All roads lead to Amber. Thank you.

I enjoyed some of the characters, can't say much for the storyline or development overall. Glad to have read it though.