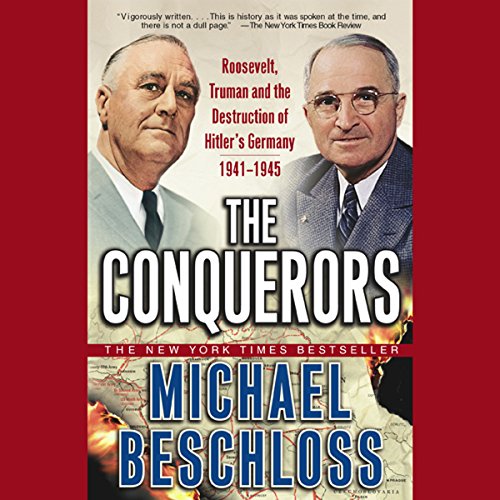 From one of America's most respected historians, The Conquerors reveals one of the most important stories of World War II. As Allied soldiers fought the Nazis, Franklin Roosevelt and, later, Harry Truman fought in private with Churchill and Stalin over how to ensure that Germany could never threaten the world again.

Eleven years in the writing, drawing on newly opened American, Soviet, and British documents as well as private diaries, letters, and secret audio recordings, this audiobook lets us eavesdrop on private conversations and telephone calls among a cast of historical giants. The Conquerors casts new light upon Roosevelt's concealment of what America knew about Hitler's war against the Jews and his foot-dragging on saving refugees; FDR's actions so shocked his closest friend in the Cabinet, Secretary of the Treasury Henry Morganthau, Jr., that Morganthau risked their friendship by accusing the President of "acquiescence" in the "murder of the Jews."

The Conquerors explores suspicions that Soviet secret agents manipulated Roosevelt and his officials to do Stalin's bidding on Germany. It reveals new information on FDR's hidden illnesses and how they affected his leadership, and his private talk about quitting his job during his fourth term and letting Harry Truman become President. Finally, it shows how the unprepared new President Truman managed to pick up the pieces and push Stalin and Churchill to accede to a bargain that would let the Anglo-Americans block Soviet threats against Western Europe and ensure that the world would not have to fear another Adolf Hitler.

Content of the book is fine. The narration is poorly done -- somewhat monotone, bland, with a decidely soporific effect. Would much prefer a trained actor. Decided to abort listening after getting an hour or two into the book.

looking to the future

The Conquerors was a well researched piece of work. It focused on the struggle within the US government and between the allies on what postwar life should be like in Germany. The key issue seemed to be "how do we keep Germany from starting a war in another 25 years." In listening to this book, I see many parallels with the issues revolving around Iraq which the world faces today.

Interesting, But A Bit Long

Although this book is not actually all that long, it does go on longer than necessary on Henry Morgenthau and his plan for post-war Germany. Probably half of the book is devoted to Mr. Morgenthau -- very much more than Harry Truman. Morgenthau may deserve his own book, but in this one I expected to hear more about the presidents on its cover than the Treasury Secretary who served them. The book could almost be retitled "The Would-be Conqueror: Henry Morgenthau's Plan for Post-war Germany." Still, the author produced a very interesting work and, reading it himself, provided a pleasant listening experience.

Good Brief History of end to European WW II. I would have preferred more information on Marshall Plan.

Could not be better!

A triumph of historical writing. Treatment of human motivations is refreshingly realistic . Summary judgment chapter is just what is needed but avoided in so much history.

Counterfactual to consider. What if Truman or Roosevelt had reached put to the Mormons of the LDS? Would they have welcomed Jewish refugees near Utah's Zion?

Research was terrific. Narration was smooth and kept my attention. A lot of new material about the war time transition of the two administrations, and the players close to power. Very interesting information about Stalin's relationship with Churchill, Roosevelt, and Truman.