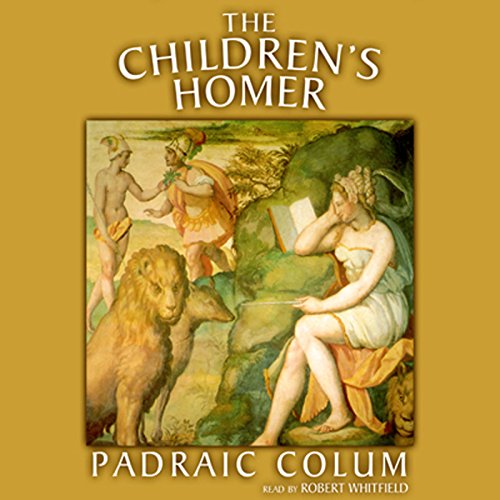 This reissue of the 1919 classic combines the immortal stories from Homer's Iliad and Odyssey into one glorious saga of heroism and magical adventure. Beloved by generations, Padraic Colum's masterful retelling of these epic adventures is remarkably fresh, consistently spellbinding, and unmatched for its richness and poetry. It carries a new generation of young readers to ancient Greece with Odysseus and Achilles who, guided by the gods, seek vengeance against the Trojans, and follows Odysseus on his perilous journey, through the land of the Cyclopes, past Circe the Enchantress, the terrible Charybdis and the six-headed serpent Scylla.
(P)2000 Blackstone Audiobooks

A wonderful translation by the Irish poet Padraic Colum for younger children. The reading is Excellent as well.

A great listen for adults as well

Do not be put off by the title, this is an excellent adaptation of Homers two classic works, and will definitely be enjoyed by adults as well. The adaptation is sympathetic, and the story flows extremely well. The narrator suits the task very well. Give it a try, you will be pleasantly surprised.

An Impressive Condensed Iliad and Odyssey

In The Children's Homer Padraig Colum weaves The Iliad into The Odyssey to make a single narrative in two parts. He begins the first part with the scene from the Odyssey where Athene recommends Telemachus to embark on a voyage to search for news of his father, and then has a minstrel, Nestor, Menelaus, and Helen narrate to Odysseus' son the major causes and events of the Trojan war. In the second part Colum closely follows the sections of The Odyssey from Odysseus' leave-taking from Calypso to his arrival back home at Ithaca. As the subtitle of Colum's book reveals (The Adventures of Odysseus and the Tale of Troy), Odysseus here becomes the focal point of both The Odyssey and The Iliad.

Colum keeps many of the humorous insults, terrible battles, moving conversations, cultural textures, vivid similes, fantastic elements, and epic flavors of Homer's epics in his 4.5 hour book. Perhaps due to his young audience or limited space, he also leaves out many impressive things, like Achilles repeatedly dragging the body of Hector around the walls of Troy, Odysseus visiting Hades, and Odysseus executing his serving women after having them clean up the gory remains of his slaughter of the suitors. The English translation seems faithful and strong, though it does favor thee, thy, and thine, as well as "archaic" forms like hast and spake.

I believe that although any reader (from child to adult) should really listen to the unabridged Homerian epics (of which there are many excellent translations and readings available on audible), if kids would be daunted by their length or more graphic gore, this would be a good choice, for although much shorter than the originals, it is not dumbed down and retains their grim view of mortality and vibrant view of life. And Robert Whitfield (Simon Vance) gives his usual elegant and assured reading.

This was missing the second to last chapter (chapter 16) of the book. Otherwise, well done! The reading was great.

My children loved it.

What did you love best about The Children's Homer?

My children 12 and 10 years old loved listening to this. We planned to listen to only 30 minutes each day but they begged for more.

This book was required reading for my son. Since he has tires easily while reading long chapters, I try to get all his novels on CD or audiofiles. He loves mythology, and he loved this book and the narration of the performer. I highly recommend it to anyone who likes mythology.

Where does The Children's Homer rank among all the audiobooks you’ve listened to so far?

Whether you are a fan of the Greek myths or not, this is a purely enjoyable translation of Homer's "Odyssey". Easy to follow and understand, this is a great translation for the entire family. The story is timeless, the characters rich and colorful, it is truly a symphony of literature.

Which character – as performed by Robert Whitfield – was your favorite?

Robert Whitfield brings the story to life. He's offers a colorful and entertaining performance of Odysseus and all of the characters we have come to love and hate.

Truly enjoyable and delightful! I will listen to this over and over again and again.

Homer is very good and entertaining

I could sit down and listen for hours, The plot is very thought out and entertaining.

Great story! The narrator cut off words so I had to have a physical copy

My teen daughter loved Homer. What more can I ask?! The reader had a gentle, British tone that added to the solemnity of the story. vVery pleased

We enjoyed listening to it on a long car trip. Great for all the different ages of our family members.