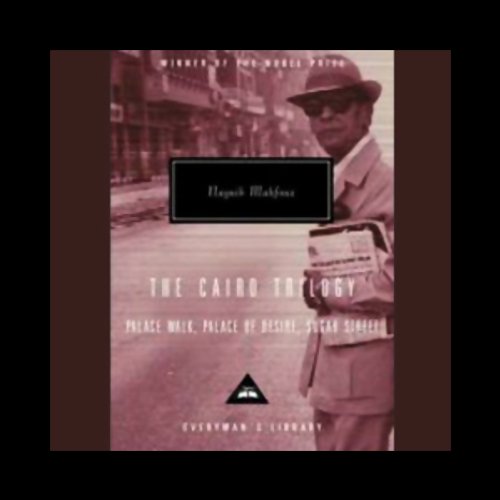 Omar Sharif leads an all-Egyptian cast in this three-part drama, recorded entirely in Egypt's capital. Adapted from Naguib Mahfouz's novels, this is a gripping family saga, with a monstrous father, a loving mother, and four children. It is set in seductive Cairo from 1917 to 1953, against a backdrop of political upheaval.
©2007 Goldhawk Productions Ltd (P)2007 BBC Audiobooks Ltd

"This is a Sony award-winning production of the late Naguib Mahfouz's saga set in Cairo from 1917 to 1953, during the rise of nationalism and the beginnings of Islamic fundamentalism. A patriarchal family, a mirror of Egypt itself, has monstrous father al-Sayyid Ahmad at its head. His sons rail against the tyrannical love and tradition in the family and ally themselves to the dangerous upheavel outside. Recorded in Cairo and crammed with the tumultous sounds and voices of a city in crisis, the dramatisation is brilliant. Its brightest star is the plangent, soulful voice of Omar Sharif as al-Sayyid Ahmad."( Observer)

No, it was not worth my time. The material selected left out the most important parts of the story.

Has The Cairo Trilogy (Dramatised) turned you off from other books in this genre?

Think I will stick with complete readings.

Did The Cairo Trilogy (Dramatised) inspire you to do anything?

Over melodramatic had the quality of a soap opera.

It was very interesting. I really enjoyed it
The sounds are very good, and the novel itself is amazing how the writer draws every character.
I loved it and I sure will recommend it to friends. I hope to find more Naguib Mahfouz audio books soon :)

A pleasant abridged version with a cast of stars.

Would you consider the audio edition of The Cairo Trilogy (Dramatised) to be better than the print version?

I would not, since this version reduces each book to an hour long dramatized version. But this is still great work in my opinion.

What was one of the most memorable moments of The Cairo Trilogy (Dramatised)?

Which character – as performed by Omar Sharif – was your favorite?

Omar Sharif only played the narrator, which although was excellently played, he did not dominate the scene. However, the cast was still fun to listen to, many of them famous Egyptian stars.

If you could take any character from The Cairo Trilogy (Dramatised) out to dinner, who would it be and why?

Omar Sharif's character was the most sincere and relatable. Romantic, wise and educated, and with age he gained wisdom.

Summary: Although this is no replacement for the original texts, which I would love to have available on Audible, this is still a fun, short and enjoyable listen.

5 out of 5 if you've read atleast the first book!

I only stress reading the first book because if not the details of the book aren't easy to keep up with. However if you have read the first book, this interpretation of the book is amazing. The actors get a 5 out of 5, the music is also a 5 out of 5. Brilliant story, and omar sharif on top of everything just takes the book over the top. Naguib Mahfouz is a genius, nothing short of it