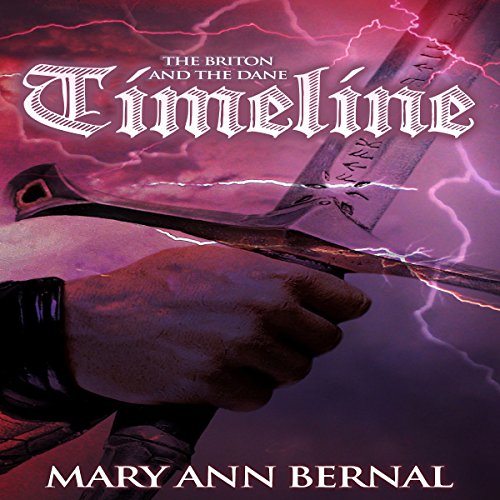 The Briton and the Dane: Timeline

Dr. Gwyneth Franger is a renowned expert in early medieval England who is set upon learning the truth about the death of Lord Erik, the last descendant of the powerful House of Wareham. Her quest becomes an obsession, a condition that began with the discovery of a portrait of the tall and valiant warrior with which she forms an extraordinary and inexplicable bond.

Digesting troves of mildewed scrolls and source documentation only enhances her belief that Lord Erik was brutally assassinated by a cabal of traitors in the pay of William the Bastard, shortly before the onslaught of the Norman Invasion.

On an archeological dig in Southern England, her team unearths an Anglo-Saxon fortress, a vast citadel built during the reign of Alfred the Great, which she believes was Lord Erik's stronghold. In the midst of her excitement, she is awakened one night from her slumbers by a disconcerting anomaly emerging from the site.

Dr. Franger finds herself transported back to the Dark Ages and at the side of the noble Lord Erik who commands an army of elite Saxon warriors, a swift and mobile force able to deploy quickly throughout the kingdom to ward off invaders.

Witnessing the unrest firsthand, Gwyneth senses that her instincts had been right all along, and she is determined to learn the identities of the treacherous blackguards hiding in the shadows, villains who may well be posing as Lord Erik's friends and counselors.

Will Gwyneth stop the assassins? Is she strong enough to walk away and watch her beloved Erik die? Or will she intervene, change the course of history and wipe out an entire timeline to save the man she loves with all her heart?

Made me feel like I was at the movies!

Would you consider the audio edition of The Briton and the Dane: Timeline to be better than the print version?

Not better but different. Both offer great intriguing suspenseful fun.As much as I loved reading this story the audio version was a total escape. I could visualize every scene because of the great writing and wonderful narration.

What other book might you compare The Briton and the Dane: Timeline to and why?

I don't think it compares to any other story. This is an original and much better than some blockbuster films.

Have you listened to any of Michele Lukovich’s other performances before? How does this one compare?

This is the first performance by Michele Lukovich that I have listened to. I think she enhanced this already amazing story. She has a soothing and inviting voice.

I did listen to this book in one sitting. I wasn't planning on it but time passed and before I knew it the story was over.

I love Mary Ann Bernal’s powerful stories and Michele Lukovich did a wonderful narration. Very easy to listen to and believable. This audio book is a great escape. Perfect story where you can just close your eyes and you are there. Would highly recommend.

Timeline is masterfully written, as I could visualize all the action going on around me and packed with ongoing suspense and captivating scenes that make it hard to put this book down. I was caught up in the emotional tale that was filled with romance, deception and intriguing encounters. This series is so delightfully entertaining that is makes you feel like you are a fly on the wall watching things that are not made for your eyes. Very clever the way the author tells such a unique tale that makes you want to know even more.Timeline is from another time (past and present) which was not quite like anything I have ever read. I enjoyed every second I spent reading this fascinating book.

Would you consider the audio edition of The Briton and the Dane: Timeline to be better than the print version?

Ha! Is this a trick question? I have read the print version prior to the book going audio and was excited to hear the audio book. Both are great. I can't rate one above another.

What was one of the most memorable moments of The Briton and the Dane: Timeline?

At the ending, which I cannot say because I don't want to spoil it for others.

Which character – as performed by Michele Lukovich – was your favorite?

The declaration of the child's status after birthing. Can't share more because I dint want to spoil it.

This is a book I will listen to over and over. The narrator and author did a good job.

The Briton and the Dane:Timeline

This is a book that I liked,despite the lack of explaination as to HOW Gweneth goes back in time and all the 'oh god is so good,let's pray' business.Gweneth goes back in time to the man she has always thought she should be with.Oddly she says she does not want to change the timeline...but doesn't her having children do that?Then she 'leaves' and wakes up at home.So how does this ending work?How is it explained that she left? I did like the intrigue and historical facts.
Michele Lukovich did a brilliant narration!
I listened to the audio version of this book.It was gifted to me for an honest review by Audioblast.