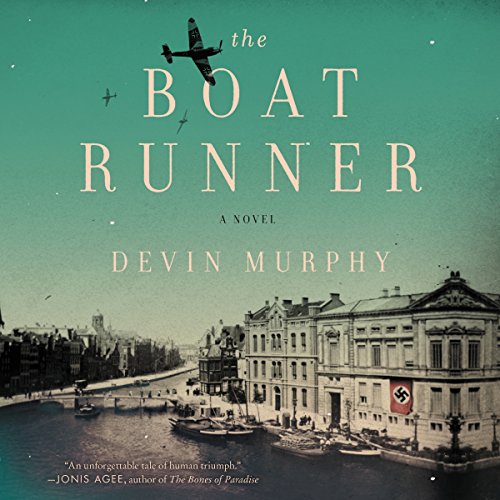 In the tradition of All the Light We Cannot See and The Nightingale comes an incandescent debut novel about a young Dutch man who comes of age during the perilousness of World War II.

Beginning in the summer of 1939, 14-year-old Jacob Koopman and his older brother, Edwin, enjoy lives of prosperity and quiet contentment. Many of the residents in their small Dutch town have some connection to the Koopman lightbulb factory, and the locals hold the family in high esteem.

On days when they aren't playing with friends, Jacob and Edwin help their uncle Martin on his fishing boat in the North Sea, where German ships have become a common sight. But conflict still seems unthinkable, even as the boys' father naively sends his sons to a Hitler Youth Camp in an effort to secure German business for the factory.

When war breaks out, Jacob's world is thrown into chaos. The Boat Runner follows Jacob over the course of four years, through the forests of France, on the stormy beaches of England, and deep within the secret missions of the German navy, where he is confronted with the moral dilemma that will change his life - and his life's mission - forever.

Epic in scope and featuring a thrilling narrative with precise, elegant language, The Boat Runner tells the little-known story of the young Dutch boys who were thrown into the Nazi campaign as well as the brave boatmen who risked everything to give Jewish refugees safe passage to land abroad. Through one boy's harrowing tale of personal redemption, here is a novel about the power of people's stories and voices to shine light through our darkest days, until only love prevails.

Wow. Just wow.
I started reading this, and I was totally bored at the beginning, but it was a book club book, so I went back to it. It definitely picked up!
As a little Jewish girl, I had plenty of experience with World War II books written from the Jewish perspective. This was my first introduction to a mindset that was not automatically and distinctly against Germany. Going through this guys life, thoughts, and experiences from when he was 14 years old was truly mind opening! And his actions that were blindly pro-Germany could be understood and seen, even though his father and uncle were clearly against that!
Going through the terrors and personal tragedies with him helped build an understanding of his final viewpoint. It's hard to realize the struggles and misfortunes of EVERYONE living in Germany or Holland, or Poland, or Austria, or really any of the European countries affected by Hitler. This book really helped the reader to see a more well-rounded experience!

This story was sad but so true in war torn times. A young man who lost everything but his physical life. Well worth reading or listening to on Audible.

Could not put down

I intended to go through the first chapter only to see if I liked it enough to recommend to be book club, but had to read the whole thing. My husband also found it to be a very compelling story. It’s beautifully written as well.

There's a good story here, but too much descriptive prose is a distraction from the momentum of the narrative. Good narration.

Great book and I enjoyed a different perspective. The narrator was especially good. I’ll look for others he has done.

Having immigrated from Poland, I have heard many stories from my family and friends who lived thru similar experiences as described in the book. I simply could not put it down. The story is not only exciting to hear but also very well written, keeping interest of the reader while describing events as if we were there. Great read !!!

This book started off slow and didn’t get a whole lot better. At no time did I get excited to listen more to this book. I’m just glad it’s over and I can move onto a better (hopefully!) book.

Would make a good movie!

A personal struggle of an ugly time in the world. Could not put it down.

I really enjoyed this story. A little different angle on WW 2 occupation of Holland and what happened to one family .