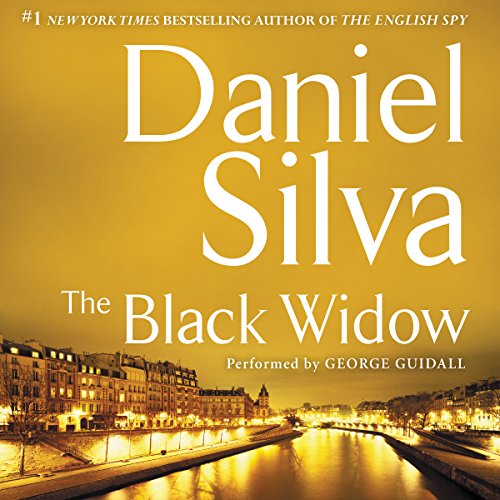 Gabriel Allon, the art restorer, spy, and assassin described as the most compelling fictional creation "since Ian Fleming put down his martini and invented James Bond" (Rocky Mountain News), is poised to become the chief of Israel's secret intelligence service. But on the eve of his promotion, events conspire to lure him into the field for one final operation. ISIS has detonated a massive bomb in the Marais district of Paris, and a desperate French government wants Gabriel to eliminate the man responsible before he can strike again.

Acclaimed novelist Daniel Silva has thrilled, entertained, and educated listeners with 18 thoughtful and gripping spy novels featuring a diverse cast of compelling characters and ingenious plots that have taken them around the globe and back - from the United States to Europe, Russia to the Middle East. From its shocking opening to its explosive denouement in Washington, DC, The Black Widow reveals itself as Silva's most timely and powerful novel yet. Following the success of his smash hit The English Spy, this electrifying thriller showcases Silva's consummate skill and brilliant imagination and is sure to be a must-listen for his multitude of current and future fans.

"The audio brotherhood of narrator George Guidall and Silva's spy Gabriel Allon is hard to beat.... George Guidall's skilled storytelling and his ease with accents and pace are just two specific elements that can be pinpointed in the success of this audiobook. Beyond these, a subtle combination of astute skill and experience creates the best possible listening." ( AudioFile)

With undoubtedly in-depth knowledge of the background, Daniel Silva led the reader into the underground world of Spies and terrorism.Striking and frightening!

Silvia's best Gabriel Allon novel yet. It could not be more timely and gives new meaning to the phrase "life imitating art." While I generally suggest those new to the Allon-series start with The Kill Artist, to understand the development of the the characters, I would make an exception for The Black Widow because it's subject matter is so timely. A very important piece of fiction which hopefully will be read and taken seriously by those in responsible positions within our government.

The Prince of Fire is back

What made the experience of listening to The Black Widow the most enjoyable?

The amazing performance by George Guidall

Which character – as performed by George Guidall – was your favorite?

It’s July and that means the time has come for another Gabriel Allon adventure from the #1 New York Times Best-selling and award-winning thriller author Daniel Silva.

Before I tell you about the book and about the perfect performance delivered by ‘‘Narrator of the Year” George Guidall, I have to confess that I’ve experienced all the books released so far by Mr Silva, in audiobook format and I loved them all. Now, after I finished with The Black Widow: Gabriel Allon, book 16, I am left eagerly awaiting his upcoming thriller, probably next year, hopefully.

The terrible events that take place in The Black Widow are so close to real life terrorist attacks that the narrative experienced became a disturbing one immediately after the author’s note, at the beginning of the book. The story follows art restorer, spy and assassin Gabriel Allon and his team of special operators for the Israeli secret organisation known as The Office as they try to take down ISIS ) the Islamic State of the Iraq and Syria). Without me giving away key plot points, you need to know that after an attack in Paris, similar to the one that took place in November 2015, the French secret services call upon Gabriel to find a way of infiltrating the ISIS network and preventing upcoming attacks.

Daniel Silva is without a doubt one of the best thriller and espionage writers out there and The Black Widow is his best book yet, in my humble opinion… The plot is complex and brilliantly written, the characters feel alive, for me at least, after reading all the previous 15 books, they were like returning members of my own family. The way that the author describes the recruitment tactics of the terrorist and the poor unstable souls that fall prey to them is just heartbreaking. This is a thriller, yes, and a great adventure story, but at its heart The Black Widow is a book about the way bad things happen to good people… a dramatic, terrifying, pulse pounding race to save innocent lives… The action will take you at breakneck speeds from France to Iraq, from Israel to Jordan, from Netherlands to Syria and than to the United States. You will not be able to stop listening, you will not sleep, you will not take breaks, you’ll just want to discover what happens next!

Near the end, I found myself keeping my breath, being scared, thinking about how these terrible acts of war and terrorism could become reality, in our world, not at all different from the one depicted in the pages of this book..

Fans of Homeland and Munich will feel right at home reading this fantastic thriller!

The Black Widow is brought to life as an audiobook by one of the best actors, voice over artists and narrators in the Audiobook Industry. His name is George Guidall and if you are familiar with the Audies Awards you’ll probably remember that he won one Audie for Male Narrator of the Year for his performance of The English Spy: Gabriel Allon, book 15, also by Daniel Silva.

George Guidall reads in a calm and soothing cadence, uses different voices and appropriate accents for all the characters and by doing so it keeps everyone clearly differentiated in the listener’s mind. You will just know who is speaking by the French, Jewish, British or Arabic accents employed is his perfect performance. He is one of my favourites narrators of all times and in my mind he is Gabriel Allon, Sheriff Walt Longmire, Mitch Rapp and The Gunslinger from the Dark Tower series.

I know that some of you may wonder which version of The Black Widow to grab. Well, in that case all I can tell you is that if you go with the audiobook you’ll be blown away, in a good way, and highly entertained by one of the best voices in the Audiobook Industry.

Silva fan or newcomer to the series, you’ll enjoy The Black Widow because it is, hands down, one of the best espionage thrillers of 2016! I was left with a lot of food for thought after the almost 14 hours long audio experience and I’m sure the book will be an instant bestseller!

Read more reviews like this one at theAudiobookBlog dot com and please vote Yes below if you found this review helpful.
Thank you,
Victor

Fiction... Only on the surface.

This is the real deal - more than once, I thought what I was reading should be classified. This is the story of what is happening right now, 2016, and the endless battles we will continue to fight. Bravo, Daniel Silva, for speaking the truth surrounded by fiction!

My favorite book this year

Best book of the year! I can't begin to describe how fabulous Daniel Silva's world of Gabriel Allon is. Each book takes the reader into the midst of the team and makes one feel they are in that world. Fantastic work!

Each new book in the series is like getting together with old friends. I hate it when I finish one because it means another wait for the next one. I just hope there is a next one.

Scary story! The author's note at the beginning partially describes what must have been a dilemma for Silva. Life imitates art.

I think I have a bit of a crush on Gabriel. It will be interesting to see what his life is like with the new responsibilities he faces. And I hope Mikhail finds happiness.

George Guidall does his usual impeccable job with the narration. This was a fabulous book!

The Black Widow was written by Daniel Silva, narrated by George Guidall, and is about fourteen hours of listening in unabridged audiobook format. Book 16 in the Gabriel Allon Series, released in 2016 by Harper Audio.

Gabriel Allon, the man responsible for taking down the killers of Isreali athletes during the 1980 Munich Olympics, is pulled from his life as a fine arts restoration expert and tasked with finding the terrorists responsible for violent and deadly explosions in Paris, France. ISIS is responsible - a story from today’s headlines. Gabriel’s plan involves the recruitment and training of a woman to infiltrate ISIS. America is the next target.

The Black Widow is an espionage novel that stands alone, i.e., it is not necessary to read the entire series to enjoy this story. There is no gratuitous sex, no objectionable language - a clean read.

Narration by George Guidall is awesome. If you have never listened to Guidall’s audio productions, do yourself a favor and you will not be disappointed. He is excellent, one of the best at his craft. The Black Widow, although predictable at times, is a page-turning thriller with many near-death close calls for several characters. Not difficult to follow.

I am a fan of Gabriel Allon, and Daniel Silva. This book was practically ripped from the headlines. He always has a great viewpoint Americans don't often see, that of Israel and Western Europe. Well done Mr Silva!

Read it till chapter 39, then listened to chapter 60, then read last 21 chapters, well worth the hybrid approach! Am sure there will be a 17th novel post a 2016 US election cycle! Thank you Mr. Silva!

Mr Silva is so current in this storyline it is eerie. The time his "Black Widow" was in the Caliphate makes it almost impossible to stop listening.
How close to the real ISIS is this story?
It's a non stop Silva Guidall and Allon ride

After listening to 18 chapters, I gave up. I felt like I was in a history class.

so slow it was painful

I listed for more than an hour and still could not figure out the plot. A slow story line does not even begin to describe this book.