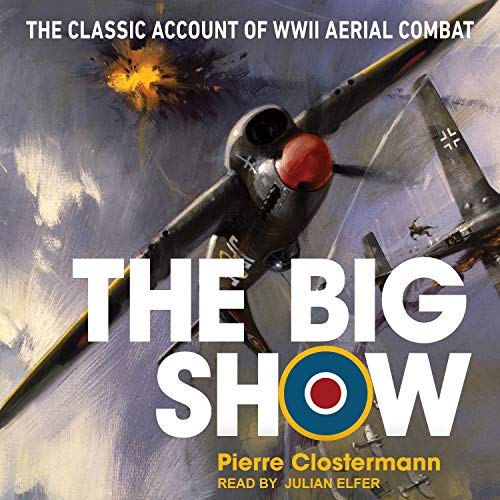 Pierre Clostermann DFC was one of the oustanding Allied aces of the Second World War. A Frenchman who flew with the RAF, he survived over 420 operational sorties, shooting down scores of enemy aircraft while friends and comrades lost their lives in the deadly skies above Europe.

The Big Show, his extraordinary account of the war, has been described as the greatest pilot's memoir of WWII.

Simply one of the best all time books on air combat ever written.

I was stoked to see The Big Show was coming out on Audible. I’ve probably read this book 6-7 times in my life. I’m half way through it and have to say, hearing it told is even more exciting and intense then reading it. The reader does a great job. If you love dog fights and flying you HAVE to get this one. Trust me. You will not regret it.

One of the best war books I ever read/heard.

This book was gripping, moving and lyrical. I really felt like I had gone through the war with the author. I felt the enthusiasm and excitement of the early days. Then I felt the increasing tension, dread and sadness of the last days of the war as the author’s squadron was relentlessly thrown into combat against a still potent Luftwaffe. Excellent book.

amazing book especially if you like ww2 aircraft stuff otlr just ww2 in general, this guy is very descriptive and good at painting a picture in your head

One of the best books I've read and heard on this topic and period. The narration was excellent and the writer captured his life in the conflict in such a clear way, Putting you right in the cockpit with him, HIGHLY recommend.

Read this book a few times from an early age, the Audiobook version is excellent and well read. Great story of a Frenchman who joins the RAF in WW2 and flies Spitfires and Hawker Tempests throughout the war, into France and Germany after D Day. Excellent narration, and Pierre Clostermann liberally sprinkles the story with some technical descriptions and the personal side of flying in WW2. A must have for any history buff.

Loved this book! After a brief introduction, almost every chapter was an account of another mission.

This book provides a different view of the fighter pilot's war from most accounts. For one, Clostermann was French, which provides a unique perspective on the war, he flew not only Spitfires but also Tempests, and he describes a ton of different mission types (fighter combat, train strafing, V1 site attacks...).

I learned a ton. For example, I thought that the Luftwaffe was pretty much gone by 1945. But, Clostermann was still involved in a lot of air to air combat right up to the end. In addition, it's kind of shocking to hear how many losses there were in Tempest squadrons.

Anyhow, this book is considered a classic and if you're into WW2 aviation, you really should check it out!

After reading and listening to many different WWII air combat books, this one is by far the most exciting, intense, and action packed. You get an up-close and personal sense of how truly packed the skies were with enemy aircraft and how massive the air campaign really was. I will most definitely be listening to this again and again.