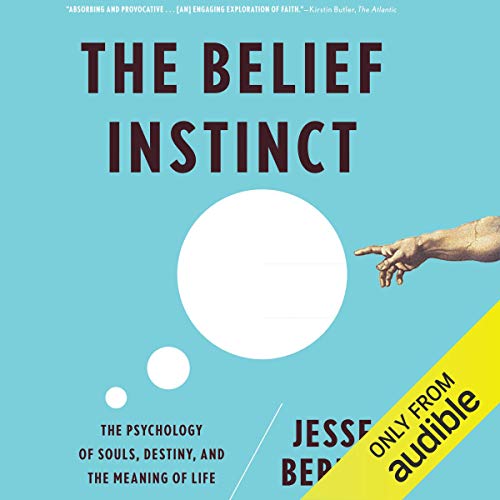 Why is belief so hard to shake? Despite our best attempts to embrace rational thought and reject superstition, we often find ourselves appealing to unseen forces that guide our destiny, wondering who might be watching us as we go about our lives, and imagining what might come after death. In this lively and masterfully argued new book, Jesse Bering unveils the psychological underpinnings of why we believe.

Combining lucid accounts of surprising new studies with insights into literature, philosophy, and even pop culture, Bering gives us a narrative that is as entertaining as it is thought-provoking. He sheds light on such topics as our search for a predestined life purpose, our desire to read divine messages into natural disasters and other random occurrences, our visions of the afterlife, and our curiosity about how moral and immoral behavior are rewarded or punished in this life. Bering traces all of these beliefs and desires to a single trait of human psychology, known as the "theory of mind," which enables us to guess at the intentions and thoughts of others. He then takes this groundbreaking argument one step further, revealing how the instinct to believe in God and other unknowable forces gave early humans an evolutionary advantage. But now that these psychological illusions have outlasted their evolutionary purpose, Bering draws our attention to a whole new challenge: escaping them. Thanks to Bering's insight and wit, The Belief Instinct will reward readers with an enlightened understanding of the universal human tendency to believe-and the tools to break free.

"A balanced and considered approach to this often inflammatory topic." (Nature)

Bering cites lots of creative research into the nature of beliefs and mind. This psychological perspective critically explores our belief tendencies and also respects the complexity of our human nature.

I appreciate his mixture of scientific, literary and historic references.

I saw a review critical of Bering's voice. I strongly disagree! There is a spirited quality authentic intelligence that comes through in the reading. I much prefer hearing the author's genuine voice over the smoothed out and phoney professional narrators used in some other audiobooks. That's one of the reasons I particularly enjoyed this book, and have come to the conclusion that I only want to buy audiobooks narrated by the author.

Oy... I can't take this voice for more then 5 mins

What would have made The Belief Instinct better?

Very easy as they were rehashing of others ideas.

Would you be willing to try another one of Jesse Bering’s performances?

If you could play editor, what scene or scenes would you have cut from The Belief Instinct?

The last couple of chapters about the mom and his dealing with her dying. Though touching, out of place.

Seems unless they have a super interesting voice, authors should not narrate their own material.

I've read hundreds of books on psychology, but Jesse Bering is regularly able to take on subjects in a completely unique way. I love books from skeptics and learning why people believe in God or the supernatural, and sometimes the studies are repetitive as well as the way their written about. This is my second book I've read of Bering's, and again, the brings so many new perspectives and studies while also intertwining some personal anecdotes. Not only did this book teach me more about the psychology of why people believe, but it opened my mind to better understand why people search for meaning in meaningless events and get stuck on the idea of having a purpose in life. If you're interested in this subject, you definitely need this book.

he is really good at reading and talking. a little too fast for me at full speed. x75 is like the perfect speed. GREAT BOOK

Worth Book to read

I think books like this should be read. It isn't entertaining or funny, however, it develops the way our brains used to work, it changes us internally, it lesses obsolete habits, which we took from our ancestors unconsciously. It makes our mind more clear and shiny)).

Compelling, liberating and witty, too.

The title 'The Belief Instinct' took me to the audio verizon. Now, I plan to read with fascination more of Dr. Bering's insight and wit.