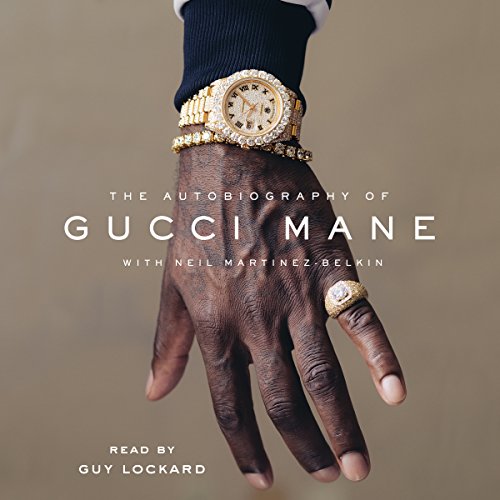 The Autobiography of Gucci Mane

The highly anticipated memoir from Gucci Mane, "one of hip-hop's most prolific and admired artists" (New York Times).

For the first time, Gucci Mane tells his story in his own words. It is the captivating life of an artist who forged an unlikely path to stardom and personal rebirth. Gucci Mane began writing his memoir in a maximum-security federal prison. Released in 2016, he emerged radically transformed. He was sober, smiling, focused, and positive - a far cry from the Gucci Mane of years past.

Born in rural Bessemer, Alabama, Radric Delantic Davis became Gucci Mane in East Atlanta, where the rap scene is as vibrant as the dope game. His name was made as a drug dealer first, rapper second. His influential mixtapes and street anthems pioneered the sound of rap music. He inspired and mentored a new generation of artists and producers: Migos, Young Thug, Nicki Minaj, Zaytoven, Mike Will Made-It, Metro Boomin.

I was never a fan of gucci... Never understood him... Never really cared. But after reading this book, it gave me an insight on who and what to he is behind the cameras. I'm not a fan of his music but I'm definitely a fan of the man.

I am a big Gucci fan I’m from Detroit Michigan I remember every time I would buy tickets to see Gucci he would get locked up twice this happened lol reading this book now I know why he was battling the same demons I was battling when I finally got to see Gucci Mane live at the Fox theatre 2017 I had been clean of lean and pills for 7 years and me seeing the new him was good to see but I knew that would be my 1st and last time seeing him because the new me know longer belonged around the old me crowd. But I enjoyed the performance and I appreciate how it was just Gucci on the stage and not full of a bunch extra people. I relate to a lot of your life except I’m a female and I’m not rich 😂😂

Great solidification for the return of Gucci Mane

The story was well organized and flowed effortlessly. The reader was very good, but I could tell some street phrases fell flat to him at times. It only took away but a fraction of the story and immersion. Glad Gucci is back.

A story with not too much depth given it’s playback time. Radric Davis still has a lot more to live and do in life so the content in this book is just beginning the story.

This book was a great Read/audible! It only took me two days to listen to and was interesting from beginning to end. Very hard for me to put down. Gucci had some very sad moments he reflected on as well as great times and I was so happy to have the opportunity to learn of his experiences of growth from drugs and the streets. His love for his family, friends, and now wife was able to overflow through his enormous love for music. Thanks again for sharing this book with the world.

Not worth checking out

struggled to finish. Narrator is horrible. writing is inauthentic. Language used is not relative to subject.

This book lacked the depth of juice one would expect in a Gucci Mane autobiography. He gently grazes the deep, life changing topics and focuses more on musical relationships. I️ wanted to hear more about the hard times- feelings, emotions and things that drove him to do the things he did. Rather, I️ believe he wrote this book as a closure to his past, but really his past should be telling his present.

This auto bio of Gucci Mane is worth EVERY minute

This is certainly the best auto bio that I’ve ever read. Well worth my time

What did you love best about The Autobiography of Gucci Mane?

His Voice And Emphasis On Words

loved it.. would listen again... I've become an even bigger fan... strongly recommend you read it or listen...