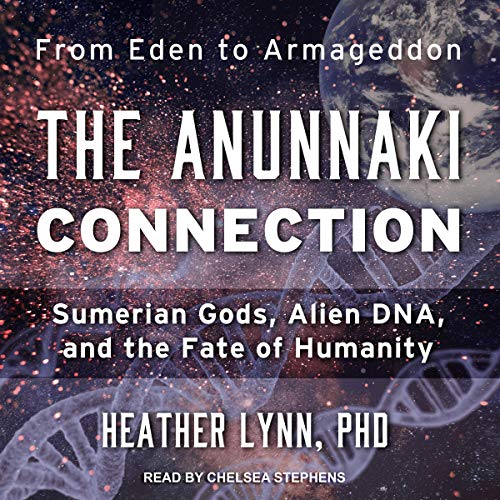 Over 6,000 years ago, the world's first civilization, the Sumerians, were recording stories of strange celestial gods who they believed came from the heavens to create mankind. These gods, known as the Anunnaki, are often neglected by mainstream historians. The Sumerians themselves are so puzzling; scholars have described their origin as "The Sumerian Problem."

With so little taught about the ancient Sumerians in our history books, alternative theories have emerged. This has led many to wonder, What is the true story behind the Sumerians and their otherworldly gods, the Anunnaki?

In The Anunnaki Connection, Heather Lynn connects a diverse range of new and existing theories about the Anunnaki, offering a definitive guide to Mesopotamian gods while exploring what role they might have played in engineering mankind. The Anunnaki Connection traces the evolution of gods throughout the Ancient Near East, analyzing the religion, myth, art, and symbolism of the Sumerians, investigating: Who are the Anunnaki?

How accurate are the current Sumerian text translations, and how do we know for sure who to believe? Is there a connection between the Anunnaki and other ancient gods? What about demons? Where are the Anunnaki now, and will their possible return spell the end of our world?

Started of good then went downhill. Ideas are very watered down and simplistic creates more questions then answers. No new information whatsoever and does a disservice to the ideas she draws upon. The last few chapters sound whacky and the ideas or all hastily mashed up. Does not seem like she is has decided herself what to believe. At first it sounds like she believes the anunnaki could have been real then throws idea around how they could just be regular humans which leaves a lot of disconnected points many unanswered questions. Then she talks about YHWH could have just bee a garden Lord lol which is overly simplistic even for a debunker. She talks about machine elf's ppl talk about on YouTube when taking DMT( no new info) just lightly alludes how anunnaki could have been that or other enteties contacted through the mind. i listened to many of not most of manly p hall talks. He always demistifies everything also and makes it more mundane which is what she kind of tries but less eloquently. overall I feel I wasted precious time to be honest. I don't fully believe in zecharia sitchin theory but he presents a complete idea that I can digest. Well researched and presented. This does none of that just throws different ideas around that have been around for a long time and tries to mash them all up while discrediting sitchin.

First off, I found a sense of relief listening to this book. There are so many details here that I know the artist was excited (and possibly trepidatious) to share. They take the Epic of Gilgamesh, Genesis, the tales of Enoch, the writings of Zachariah Sitchen, ancient Hebrew manuscripts, and share it all in a very well laid out way. My beliefs about the world and reality are, far from normal and it is difficult for me to find an outlet. This author really gave me some comfort in a world where thinking 'differently' makes you an outcast.
I will be listening to this book at least once more. This book is not for those of you who believe what is taught by institutions. This book will give you the sources that mainstream religion has taken out of context. This book ventures into the mind and says, "What if you've been lead astray?". This book was a fantastic piece of my week and I'll be looking for more works by this writer.

You made some great points but I firmly believe that Zecharia Sitchin has the translations right of the clay tablets, because with knowing that Geneticists still don't have an answer for three "Missing Link" for when we became Homo Sapiens Sapiens then there's no other explanation that fits other than genetic engineering performed by the Annunaki.

Although the subject matter is somewhat controversial, the way it is presented is well researched and informed, with little bias. This is NOT an episode of Ancient Aliens.

I'm gonna listen to this several more times and I def have some notes to take and research to do. The last couple chapters were horrifically eye opening. The last few years I've actually felt that we didn't invade Iraq for oil but for antiquities or to destroy them. That's totally my thoughts, nothing to do w what Heather writes. Some of the facts about museum robberies in Iraq and even Brazil really leave me thinking...

A good, prospective on the Ancients. The storyline holds your interest and flows well.
Narrator had a pleasant voice.

Very hard to follow, very robotic narration. But it is informative. It’s up to you to listen.

this book provides such a wonderful variety of well researched theories of human mythology and history while building on the stones laid by denizen and sitchin. while a little college thesis-y at first this book explodes into account after account of curious history with a wonderful selection of sources to further delve into later.

a book for the open minded

I really enjoyed this book. I like that the author is presenting the information in this book as something for you to think about. There are a lot of similarities between many different ancient cultures both in their stories and stonework. There is definitely more that happened than what the history books or a lot of academics tell you.

The information contained gives a look inside archaeology. An archeologists outlook is a pleasant surprise. The atypical, Hollywood character it's not. The hours of labor required for only the possibility of success takes a real love for your work. I'm still waiting for the definitive answer on where the 1st people of Sumer came from though.