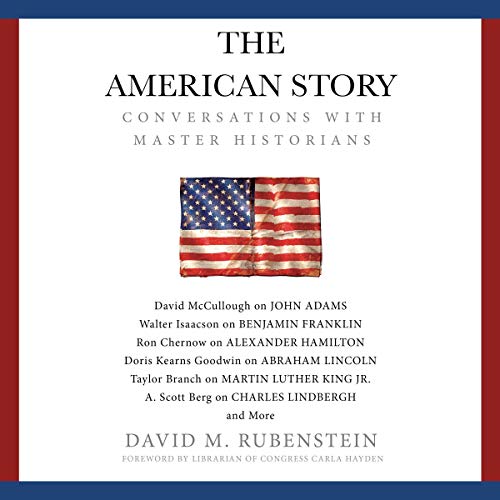 In revealing conversations with our greatest historians, co-founder of the Carlyle Group and patriotic philanthropist David M. Rubenstein takes listeners on a sweeping journey across the grand arc of the American story.

These lively dialogues present some of the biggest names in American history exploring the subjects they intimately know and understand. You’ll hear live recordings of:

Through his popular program The David Rubenstein Show, David Rubenstein has established himself as one of today’s most thoughtful interviewers. Now, in The American Story, David shares almost a dozen interviews that capture the brilliance of today’s most esteemed historians, as well as the souls of their subjects. The audiobook presents archival recordings of these interviews and features new introductions by Rubenstein as well as a foreword by Librarian of Congress Carla Hayden, the first woman and the first African American to lead our national library.

Through these captivating exchanges, these best-selling and Pulitzer Prize-winning authors offer fresh insight on pivotal moments from the Founding Era to the late 20th century.

I agree with reviewer who said the book was good. But I'm really annoyed that several chapters in the hardback book are omitted from the audiobook. It doesn't say anywhere that the audiobook is abridged. If this happens with another book, I will cancel my membership. If audible or the publisher wants to abridge, say so.

Amazing work by David Rubenstein but...

This book was a very informative collection of conversations and the audiobook made the conversations much more real. My only two complaints and hence the 4 star rating (1) the quality of some of the recordings were far below Audible standards (2) As the previous review mentioned, few significant conversations were missing. Among which were Richard Reeves discussing JFK. Which I would have definitely wanted to listen to. That being said I'm a big fan of David Rubenstein and his work in all aspects of private and public service. I enjoy his interviews and wish to become a member of The Economic Club of Washington D.C. one day so I can witness his interviews in person.

Where is Thomas Jefferson?

I was so looking forward to Jon Meacham’s interview, but alas, it was missing. What confounds me is that the cover of the hard copy book shows Jon Meacham On the cover. What gives?

The audiobook is missing important conversations.

The book is wonderful. The conversations with the historians are engaging and interesting, The only problem? The audiobook is missing some pretty significant ones, including the ones on George Washington, Thomas Jefferson, and JFK.

Some of the interviews were just too rushed

It was an interesting book to hear historians talked about these notable and heroic Americans but some of the interviews were just too rushed. Best example was the interview with Bob Woodward. Rapid fire questions allowing him one sentence answers about the Presidents on his lifetime. Not sure why Mr. Rubenstein chose that format. And on some cases the sound quality was below average.

I love Audible, but this version skips four chapters. “No matter”, you say... “Probably lesser known figures?” Uhm... no. Washington, Jefferson, JFK, and LBJ. Not cool. Even if they were “read” vs. the actual interview, I expect full content.

I often wonder if I’m cheating by listening to a book instead of reading it. I imagine I’ve gotten more out of listening to this one than I would have by reading it. I loved hearing the author’s describe their own works. My inner reading voice would not have done them justice.

It is a great look at history as well as a glimpse into the library of Congress.
There were 4 interviews in the book that do not appear in the audible version. I wonder why.

Interviews were insightful and very different from one another. Highly recommend. History comes to life through these authors. Chief Justice interview is not to be missed!

excellent listen . i learned so much and was entertained the entire time. great interviews