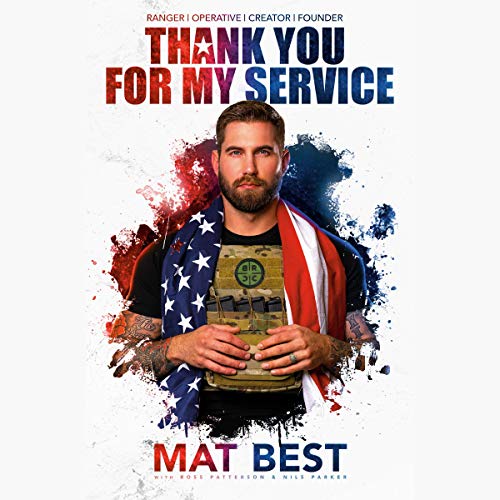 Thank You for My Service

Thank You for My Service

The unapologetic, laugh-your-ass-off military memoir both vets and civilians have been waiting for, from a five-tour Army Ranger turned YouTube phenomenon and zealous advocate for veterans

Members of the military’s special operations branches share a closely guarded secret: They love their jobs. They relish the opportunity to fight. They are thankful for it, even, and hopeful that maybe, possibly, they’ll also get to kill a bunch of bad guys while they’re at it. You don’t necessarily need to thank them for their service - the pleasure is all theirs.

In this hilarious and personal memoir, listeners ride shotgun alongside former Army Ranger and private military contractor and current social media phenomenon Mat Best, into the action and its aftermath, both abroad and at home. From surviving a skin infection in the swampy armpit of America (aka Columbus, Georgia) to kicking down doors on the outskirts of Ramadi, from blowing up a truck full of enemy combatants to witnessing the effects of a suicide bombing right in front of your face, Thank You for My Service gives listeners who love America and love the good guys fresh insight into what it’s really like inside the minds of the men and women on the front lines.

It’s also a sobering yet steadying glimpse at life for veterans after the fighting stops, when the enemy becomes self-doubt or despair and you begin to wonder why anyone should be thanking you for anything, least of all your service. How do you keep going when something you love turns you into somebody you hate? For veterans and their friends and families, Thank You for My Service will offer comfort in the form of a million laughs and counsel as a blueprint for what to do after the war ends and the real fight begins.

And for civilians, this is the insider account of military life you won’t find anywhere else, told with equal amounts of heart and balls. It’s Deadpool meets Captain America, except one went to business school and one went to therapy, and it’s anyone’s guess which is which.

Not what I was expecting!

This audiobook is the ultimate journey of unbridled narcissism. This is the type of genre I listen to but this was all over the place. It didn't flow and many things in this book I wondered why he even put them in there other than filling his ego. There were chapters where you wanted another hour of detail then it would be followed up by a chapter of complete nonsense. I really enjoy his youtube channel so I thought this would dovetail perfectly. I was very wrong!

If Deadpool was a ranger...with less cancer

One of the best fusions of military, dark humor, and life lessons I've read. extremely easy to get through with great narrative performance by Mat Best himself.

I laughed, I cried, I touched myself.

Actually had my attention the whole time. What started as wanting to listen to one chapter turned to two then before I knew it it was 4am and on chapter 14. Being a vet I found the way dark humor balanced the more dark aspects of war. Keep up the amazing work Mat.

Made me long for the glory of combat again....

It’s a good read, Mat does a good job keeping to his points in his story telling for his first time out. Made me laugh but most importantly it made me long for the days of combat. As a former combat veterans myself, his stories hit home so well that for the longest time I thought I had a really sick sense of humor....nope, all combat vets have the same sick sense of humor! I miss the camaraderie of my fellow brothers in arms. I miss the humor, I miss the pain and suffering we all went through as it brought us closer than and blood relative I’ve ever had. Something I’ve tried to rekindle in my civilian life but unfortunately have to come to realize that bond cannot be formed out here. It’s only in the crucible of pain and combat can that kind of bond be formed between men. Where they know I will always have their 6 and they will always have mine. It’s what I miss most about my days serving my country. Mat does an outstanding job explaining that bond and how it’s formed. I recommend this read to any wife or sibling of a combat veteran if they want to understand their husband or brother and what he’s all about. Mat tells it like it is. The good and the bad.

This is amazing! So good guys, ask yourself do you love deadpool then your going to love this book by Mat Best! its the way I've always wanted to hear war stories!

This is a great listen! Only the author could narrate this book to make it extremely entertaining, and boy does he do it to the fullest!

Thank you Matt, your view on certain aspects of some of the shit we live through that’s normal to us but completely fucked to the normal people out there in the real world helped me. Keep doing you brother just know you’re making a difference.

Mat is a National Treasure!!

This dude is not only hilarious, a great narrator, and makes sine of the best fucking coffee I've ever had, he's also an inspiration to a lot of people looking for direction fresh out of the military as well as others looking for purpose in their own lives. Well written and read by Mat.

It's homo-erotic enough to probably be true.

Matt Best doesn't write like a POG so that's pretty cool, I guess. It sounds way too crazy to be true... but that's the problem, you may be able to exaggerate things like this, but you'd be hard pressed to just make them up. Also was disappointed that at no point did Matt beat up a 13 year old in the cereal aisle of the local supermarket; because, Hollywood has promised me that upon contact with that many delicious options and no one to tell us what to do... veterans lash out... especially at young children and pregnant women in particular. Thanks Matt, how am I supposed to deal with this crippling disappointment? buy the book.

Really great book and it being read by Mat Best himself makes it even better, more authentic I would say. The only question I have is what do you have with Germans an poop and pee? I as a German have never encountered that personally that we are so obsessed with that. Other than that great book and even greater audiobook keep going and creating a from Germany

Look how great I am

In the book the author basically just brags about how great he is and how he can just kill everyone.