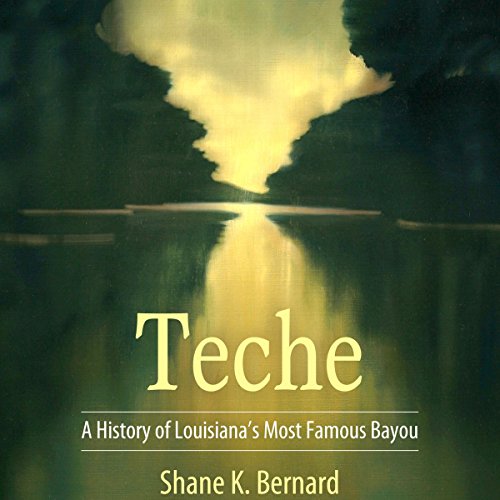 Shane K. Bernard's Teche examines this legendary waterway of the American deep south. Bernard delves into the bayou's geologic formation as a vestige of the Mississippi and Red Rivers, its prehistoric Native American occupation, and its colonial settlement by French, Spanish, and eventually, Anglo-American pioneers. He surveys the coming of indigo, cotton, and sugar; steam-powered sugar mills, and riverboats; and the brutal institution of slavery. He also examines the impact of the Civil War on the Teche, depicting the running battles up and down the bayou and the sporadic gunboat duels, when ironclads clashed in the narrow confines of the dark, sluggish river.

Describing the misery of the postbellum era, Bernard reveals how epic floods, yellow fever, racial violence, and widespread poverty disrupted the lives of those who resided under the sprawling, moss-draped live oaks lining the Teche's banks. Further, he chronicles the slow decline of the bayou, as the coming of the railroad, automobiles, and highways reduced its value as a means of travel. Finally, he considers modern efforts to redesign the Teche using dams, locks, levees, and other water-control measures. He examines the recent push to clean and revitalize the bayou after years of desecration by litter, pollutants, and invasive species.

The second part of the audiobook describes Bernard's own canoe journey down the Teche's 125-mile course. This modern personal account from the field reveals the current state of the bayou and the remarkable people who still live along its banks.

The audiobook is published by University Press of Mississippi.

"An important audiobook about a uniquely interesting place." (Ken Wells, author of Meely LaBauve: A Novel)

"The audiobook is an amazing and much-needed treatise on a fascinating region." (Tim Gautreaux, author of Signals: New and Selected Stories).

Bernard examines this famous waterway of the Bayou country. The author delves into the geological formation of the bayou as well as the Mississippi and Red Rivers. Bernard also exams the prehistoric Native American occupation and that of the French, Spanish, and Anglo-American pioneers. The economy of the area is reviewed from sugar, including sugar mills, and riverboats. The author reviewed how the Civil War effected the area as well as the postbellum era of misery. The author covers the environmental problems of the Bayou with pollutants, garbage and invasive species.

In the second part of the book, Bernard describes his canoe journey down the 125-mile course of the Teche. The book is well written and meticulously researched. The author successfully covers a broad range of topics from the history, inhabitants, geology, agriculture, transportation and environment. I learned a great deal from this book in a most enjoyable fashion. The book makes me want to take my own canoe trip of the Teche.

The book is six and a half hours long. Toby Sheets does a good job narrating the book. Sheets is a voice-over artist. This is the first time I have heard him narrate a book.

Did no one think to check the narrator’s ability to pronounce the Cajun words ??

I LOVED this story! I LOVED it so much that it was utter agony …every single time the narrator slaughtered the most common Cajun names and words. The narrator has an amazing voice/skills - beautiful Parisian French but ZERO ability to properly pronounce the Cajun words- which is so unfortunate . It’s still a great story and maybe if you weren’t knowledgeable on what it was suppose to sound like … lol does the author not get to approve the narrated version ?? Tsk tsk

Super interesting story of the Teche.

Super interesting story of the Teche. Confirms some of my own observations from studying my own Verret ancestors residing on Bayou Teche between Jeanerette and Franklin. Other references brings to mind memories I have of family stories retold to me, such as the Great 1927 Louisiana Flood.

By 1927, my grandparents, Edna and Fernest Verret were the primary residents of Louis Verret’s Bayou Teche tract of land. Their children in 1927 were Walter S. (1922); Howard Adam (1924; and Marian Mae (1926). My vague memory of a story told to me is that my grandmother, Edna Elizabeth, took a train to New Orleans with baby Marian to escape the flood.

My Bayou Teche Verret ancestry began about 1790 with the acquisition of Spanish Land Grants to brothers, Louis and Philippe Verret. They had twin tracts of land fronted on the east bank of the Bayou Teche down stream from Jeanerette.

As this book reveals, the Bayou Teche already was well inhabited prior to 1790.

I had no idea there was so much Civil War activity on the Bayou Teche.