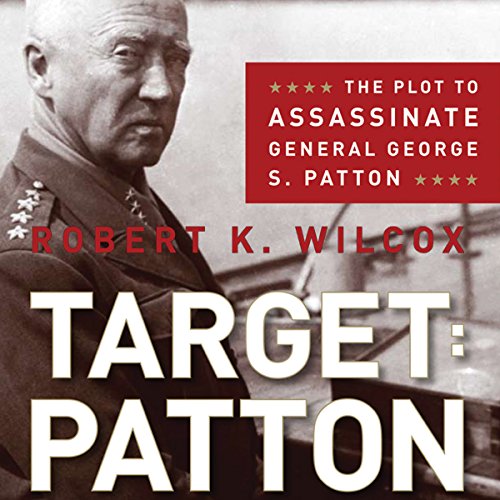 Written like a WWII spy thriller and meticulously researched, Target: Patton leads you through that fateful December day in 1945, revealing a chilling plan to assassinate General Patton. Backing up this shocking story with facts, photos, and eyewitness statements, Wilcox reveals long-hidden documents and accounts that explain how secrets Patton knew - and his strong anti-Soviet views - may have cost him his life.

Not only does Wilcox reveal how, why, and when, he also names names, exposing little-known stories and secrets of such key players as General "Wild Bill" Donovan, the storied head of the OSS (the predecessor to the CIA); an OSS assassin; an Army intelligence agent; and even Josef Stalin himself.

Target: Patton challenges readers to look at the evidence and question the conventional wisdom. After reading it, few will think of General Patton or the circumstances surrounding his death in the same way again.

Robert Wilcox does a solid job presenting his theory that Patton was murdered. He lays out the theory and backs it up with either personal testimony, evidence, or circumstantial evidence. It is well written and documented.

Wilcox concludes, there isn't enough evidence for a jury to say "guilty" but there is enough that a grand jury would have issued an indictment. I agree with that assessment.

There is a certain case for motive from the Soviet side. The NKVD needed little motive to murder anyone, so that is not hard to assume. If Stalin wanted to prep for a potential war, he wanted to kill the US's best general. Roosevelt & Truman were certainly very deferential to the Russians, but I am not sure they would join in a plot to kill him. Patton was already removed from a position of influence, which he dutifully followed. If he quit, went home, and "told stories" critical of Marshall or Ike, he would have a following, but it's not like everyone would believe him, since he already had a tenuous relationship with the press. Bottom line, is that I don't think anyone in the US really had a motive.

The weakest link is the Douglas Bazata story. It is the testimony of a credible operative who was in country during the period. That much is true, but how he did it seems too hair-brained to be true. If someone was going to commit and assassination, even to look like an accident, Bazata;s method, seems way too risky. First he follows the car, jams the window at a stop, then shoots him with a low velocity projectile right as the car crashed into the truck, through the open window, assuming Patton was in the right line of fire. It seems too complicated where too many things could go wrong. Why not dress up in German uniforms and pretend you are some lingering Nazi partisans? Why not ram the car, instead of pulling in front of it?

The narration was poor. And the cadence of the narrator's voice didn't sound natural. I am not sure if it was totally the narrator's fault. Most of the sentences seemed incredibly long. I love history and especially world war two history but this was so difficult to listen to and required so much concentration I kept finding my mind wandering and would constantly have to re-listen to parts of the book. I finally gave up.

Patton was the greatest general America has ever produced. The Germans were mortified by him as were the Russians. A must read for all WW2 /Patton/Stalin history buffs!...Also the reader was excellent...five star *****-

The Iron Wall Was Actually Built By Eisenhower

I would recommend to a friend, and also a Congressional Committee.

What was one of the most memorable moments of Target: Patton?

The most touching moment was Pattons last leave in the United States, where he said his last goodbyes, as he knew he was going to be assassinated by his own government. I guess you could say Russia was after him to, but there were no Russians involved in his murder.

What does Lynn Benson bring to the story that you wouldn’t experience if you just read the book?

I believe Lynn believed what she was reading.

No, that's plain silly for anyone to do that with any book.

When Germany surrendered, Patton wanted to push the Russians back to their border, with the Third Army, as they were there for the taking. They had no supplies, plus they are the worst soldiers in the world, and remain so. He told a Russian General just that, and he complained to the US, and they thought Patton was out of order . Churchill agreed with Pat tons mindset, but Eisenhower, the most overated soldier of WW11, knew Patton was resigning, and might have run for President, making Patton a target, and the rest is history. While in the military in 1969, there was still talking about Patton being taken down, and now these books are written about it, and that had everything to do with the Freedom of Information Act, but Eisenhower even ignored that Russia still held 15,000 of our POWs, when he agreed to Stalins demands in carving up Europe. Some of these POWs never were released.The Iron Wall was built by Eisenhower, and he was no soldier, along with Marshall who took great pleasure in humiliating Patton, for speaking the truth. Patton wanted 3 weeks to push the Mongoloids, as he called the Russians to push them back to their border, but they thought Patton was insane, thus we lived with the Iron Wall for 50 years, but make no mistake about it, General George S. Patton was most certainly assassinated. He knew to much, as he told many of his friends on his last stateside leave.What a travesty this was, but there will be no hearings on this. Powerful folks still run this country, and Obama is trying to get around them, but he will fail.

One of the best books I've ever read

Extremely detailed book and well narrated. exposes the ties from the Western Communists to sheild/fund Stalin and his murderous regime. Life changing, thank you Mr. Wilcox..

I've read a fair amount about the life of General Patton over the years, but this book was a fascinating analysis of the very real possibility that his death was not an accident. The author makes a compelling case based on solid evidence that Patton was assassinated. That and the eye opening revelation of the depth of Soviet spies embedded deeply within the highest levels of the U.S. government make this a page turning thriller. Unfortunately, the performance of the narrator was marred by a fair amount of mispronounced words and sloppy editing. The narrator has an excellent voice, but does not have the background or education to be narrating about WWII.

The book seems to flounder at times,but it gives food for thought. Hearing the reader cough,turn pages and get lost takes away from the story. Did the author she'd new light?

This could have been a great book... If only the author had organized and shortened it.


The premise is interesting and well researched, but the writing jumps around so much, and repeats itself so often with only the most tiny of addictions that it became exhausting to listen to. It mostly reads like this.

Rinse and repeat over and over.

Also the reader doesn't change his tone, and there are many spots where he coughs, or licks his lips, or you can hear him turn the page. After the first hour it becomes droning.

This could have been a great book if it was edited better, and had a reader who changed his tone once and a while.

odd phrasing and many mispronounced words, as if the book was not previously read or the performance practiced

One of the greatest betrayed and killed

What other book might you compare Target: Patton to and why?

About Face- David Hackworth both he and Patton were probally the greatest and most feared combat leaders from WW2 to present and both couldn't be silenced and stood their ground.
About Face is a book without equal and its a shame we continue to allow politicians and PC
career soldiers to discredit and destroy the people who speak the truth.