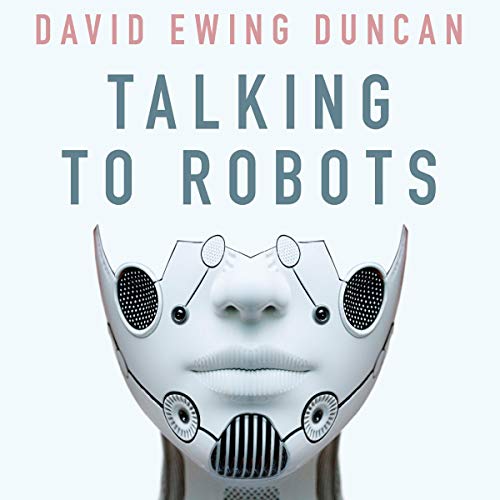 What robot and AI systems are being built and imagined right now? What do they say about us, their creators? Will they usher in a fantastic new future, or destroy us? What do some of our greatest thinkers, from physicist Brian Greene and futurist Kevin Kelly to inventor Dean Kamen, geneticist George Church, and filmmaker Tiffany Shlain, anticipate for our human-robot future?

From present-day Facebook and Amazon bots to near-future 'intimacy' bots and 'the robot that stole my job' bots, best-selling American popular science writer David Ewing Duncan's Talking to Robots is a wonderfully entertaining and insightful guide to possible future scenarios about robots, both real and imagined.

These scenarios are informed by interviews with actual engineers, scientists, artists, philosophers, futurists and others, who share with us their ideas, hopes and fears about robots.

In the future, we will all remember when the robots truly arrived. Perhaps a robot surgeon saved your child's life, or maybe your inaugural robot moment will be more banal, when you realised with relief that the machines had taken over all the tasks you used to hate - taking out the rubbish, changing nappies, paying bills....

Perhaps your recollection will be less benign, a memory of when a robot turned against you: the robot that threatened to seize your assets over a tax dispute.

You might also remember when the robots began campaigning for equal rights with humans, and for an end to robot slavery, abuse and exploitation.

Or when robots became so smart that they became our benign overlords, treating us like cute and not very bright pets.

Or when the robots grew tired of us and decided to destroy us, turning our own robo-powered weapons of mass destruction against us.

Further into the future we will remember when robots became organic, created in a lab from living tissue to look and be just like us, only better and more resilient. Even further in the future, we will recall when we first had the option of becoming robots ourselves, by downloading our minds into organic-engineered beings that could theoretically live forever.

And yet...will we feel that something is missing as the millennia pass? Will we grow weary of being robots, invulnerable and immortal?

Mostly we love our technology as it whisks us across and over continents and oceans at 35,000 feet, or summons us rides in someone else's Prius or connects us online to long-lost friends. Yet deep down, many of us fear that a robo-apocalypse is all too possible. We seem obsessed with robots, as we embrace contrasting visions of robo-utopia and robo-dystopia that titillate, bring hope and scare the hell out of us.