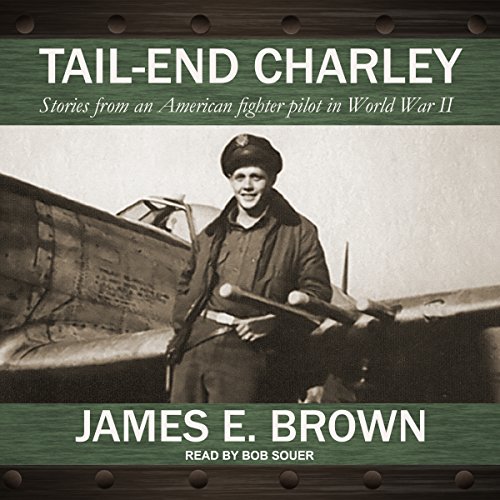 On his 19th birthday, James E. Brown tries to fake to his flight instructor that he has flown before. On his 21st birthday, Brown is on his way home after logging 85 missions in a P-47 fighter over Italy, France, and Germany.

Brown's stories surrounding his training and combat experiences in World War II reveal brushes with death, continuous peril and, ultimately, a coming of age for a young man whose freshman year in college becomes instead a heroic engagement with one of the fiercest enemies his country has ever encountered.

Ever dutiful to the mother who tells him to "write it down, Jamie", Brown notes his experiences in the journal she provides and adds detail later to deliver a firsthand account of life as a pilot in the final months of combat within the European Theater.

Serving as Tail-End Charley - the last man out - in most of the missions he flew, Brown's job was to record results for the interrogation officers afterward. But Brown offers much more insight in this memoir. Follow his triumphs and travails with colleagues who become lifelong compatriots during an indelible period in American history.

Honest, well written and interesting. A very good read, especially if your an aviation fan or a WWII buff.

This is an outstanding historical account of the men who flew the P-47 “Jug” in the Mediterranean theater of World War II. James E. Brown did a wonderful job of capturing and writing about the story of his and his friend’s training before the war and then the combat they experienced together that followed. Highly recommended for reading or listening pleasure. A very important historical record of that time.

this was really well done. I'm very interested in history and this fills in a lot of gaps and made it feel like I was there.

Interesting story about P47 fliers near the end of WWIi. The narrator tried to build up suspense and I kept waiting for more action. Don't get me wrong, author and his colleagues made a great contribution and sacrifice, but a little mundane.

Great story about a humble but heroic example of the greatest generation. highly recommend. dont wait. ..just get it!

So entertaining - I was sad when it was over

The amazing personal story provided insight on the activities and relationships that form during a critical time of the war. I was so entertained by the experience I was tempted to listen to It immediately again. You start to love each and everyone of his buddies and have genuine affection for the author. What a story he shared.

The way it was

Good story about the every day lives of World War II fighter pilots as seen from the cockpit of a P47 fighter plane. It provides a perspective of every day strafing and dive bombing which you don’t see another books

great narrator great story a must for all who want to know what flying in want 2 was like.

Stories from a average(if there is such a thing) P47 fighter pilot. What a life it must have been. Listening to the excitement, drudgery and sadness of war, this book provided all.

I often enjoy war stories and this one is no exception. Well detailed and very well read. it reads like a diary. Enjoyable all the way through. Thanks for a great read.

Well-told report of an American 2nd world war fighter-bomber pilot, beginning with his training in the States and through his tour of duty through Italy, France and Germany in 1944/45, flying a P-47. A nice young guy, who fought hard but didn't lose his conscience. The narrator did - as he seemingly always does - a magnificent job! Thanx, and a full recommendation for everyone woh is interested in this subject.