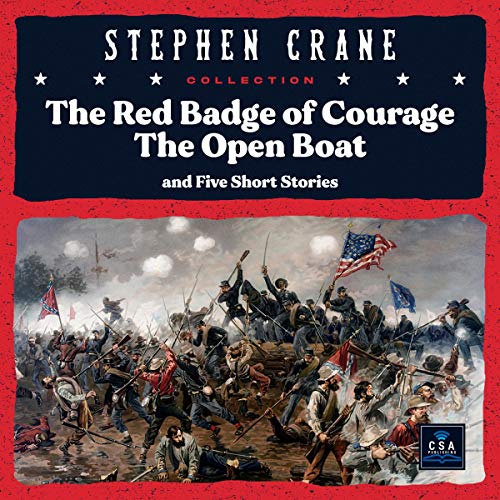 The Red Badge of Courage

A fictional account of the American Civil War, The Red Badge of Courage depicts more than the challenges and destruction of war. Told from the narrow viewpoint of a young private in the Union Army, the reader gains insight into the thoughts, fears, and emotions of a soldier as he witnesses his friends and fellow “mule drivers and mud diggers” battle for the Union’s victory. Faced with uncertainty, grief, shame, and battling his own cowardice, Henry Fleming eagerly looks forward to being injured to display his heroism and overcome his fears, volunteering to carry the flag into battle, unarmed and vulnerable

Four desperate, exhausted men are forced together by fate and nature after being shipwrecked. The reality of their situation is grim as they drift along in their small boat, isolated, fatigued, and uncertain. In an attempt to blame or call out to a higher power for assistance, the protagonist, the iconic condescending observer, understands how nature’s indifference to their circumstances will seal their fate.

In these five unabridged short stories, Stephen Crane masterfully depicts the human condition. Through his keen observations of the simple, unnoticed aspects of life, he deftly describes man’s relationship to society, human nature, and the power of transformation. In each of the stories, he creatively reveals the internal battles, conflicts, and awakening that man collectively experiences. Grab your copy today to discover how he reveals man’s sense of dignity, optimism, grit, courage, and greed.

A good friend if mine recommended I read Stephen Crane as he is his favorite author. When I saw this package deal I knew this was the one to get. I have enjoyed The Red Badge of Courage so far and I always appreciate a narrator who uses different voices for various characters. 10/10 would recommend!

Crane deftly makes the listener question his/her own flaws and relationship with the world! I really enjoyed how each character is forced to evaluate his motives, address his fears, and look at his position related to society. It made me question my own courage, lack of humility, and dignity. Although originally written in the late 1800s, these stories are ironically relatable to all of us today.

The Red Badge of Courage is fantastic. It's a nice bonus to also enjoy his other popular stories.

I really liked the adventurous war story, The Red Badge of Courage. Stephen Crane was a great author and the narrator did a good job telling his stories.

Stephen Crane’s, The Red Badge of Courage was excellent. This collection offers that and much more. Looking forward to listening to some of his short stories.

I’ve always been into history. This was recommended to me by a friend and so far, I’m really enjoying it.

The Red Badge of Courage

I got this because I was interested in the first book. So far, the first book has been great and I look forward to hearing more of the author’s novels and short stories.

I really liked The Red Badge of Courage. It’s a classic American piece that will be in my library for a long time.