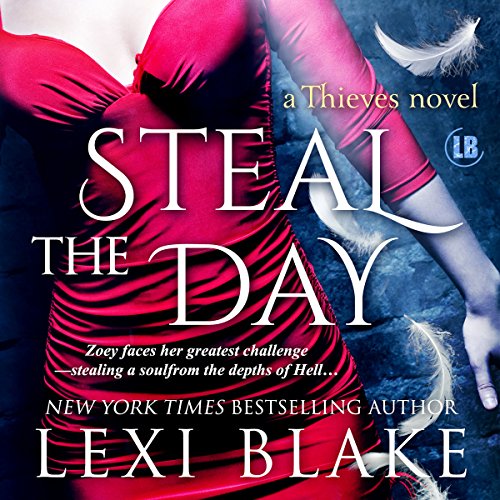 The world's most unusual thief faces her greatest challenge - stealing a soul from the depths of Hell. When a member of her crew is dragged to Hell by a demon, Zoey plans the most dangerous heist of her career. With her team at her side, Zoey intends to sneak onto the Hell plane and steal Sarah back.

The job seems impossible until a new client makes them an offer too good to refuse. If she can find an ancient artifact called The Revelation, she can use it to locate an angel who holds Sarah's redemption in his hands.

Surrounded by warring angels and demons, the greatest threat may come from one of her own. Torn between her Fae lover and the vampire who has always held her heart, Zoey finds that she and Dev are trapped in Daniel's web of secrets and it may be Zoey who has to pay the ultimate price.

Lexi Blake is a master storyteller and Kitty Bang kills it as Zoey. She doesn't read it - she performs it.

I had read his book some time ago and enjoyed it, but I must say that Kitty Bang's voicing of the characters brought a new dimension to the tapestry that is the thieves world. To my mind, Ms. Bang brought a new level of emotion to the story and made me love Devonshea, Zoey, and Danny even more. Is this worth a credit, definitely!! Do yourself a favor and immerse yourself in Lexi Blake's Thieves series.

Audible, Please Obtain the Rest of the Series!

Amazing story with terrific characters. I’ve seen reviews comparing this series to “Twilight,” but it’s so much better. I would honor this series to be compared to my all-time favorite series: The Hollows, by Kim Harrison.

Book Two in the Thieves Series

Book Two in the Thieves series.

Zoey, Dan and Dev are back to take on the demons of Hell. The crew is planning to steal Sarah back from her demonic captor and finds help in the most unlikely of places. Meanwhile, Dan is becoming a major power player in the vampire world with guidance from Dev. Of course, tenuous relationships will be broken and friendships will be tested.

If you're looking for the best of both Robin Hood and Merry Gentry's worlds, this is the book for you!

hot, intense and I'm here for all of it!

Woooow.. this book was intense. New characters are introduced as the story continues where it left off.
Things between Zoey, Daniel and Dev heat up and phew, it gets HOT!!
They may be searching for ways to get Sarah out of hell, but in between there's more story building, relationship building and power shifts.
I'm already downloading the rest of this series in audible because the narration is fantastic!
kitty does a great job with each characters voice and her accents are top notch!

Kitty Bang does a wonderful narration of this book. Each character has a vibrant voice and you know who’s speaking at all times. Of course the story written by Lexi Blake is well written. She draws the listener into this paranormal world effortlessly.

Surprising after the first book.

I was worried this series would be a dud for me, but I went ahead with book 2, because it is Lexi Blake. Things get wild with Lexi. So I stuck with it and I am glad I did. You will too. Great narration with Kitty at the helm. I will keep going.

Cheesy after a while

I love this series! The second book is a tad cheesy at times and way too focused on how Zoey feels rather than her new role as queen.

I am more interested in how their poly relationship will break the Vampiric/Fae standards, not to mention how their will work within the rising of a new kingdom.

if your bored this series will have u binging

kitty bang does a phenomena job narrating she changes tones and slips from one character to another with ease your never in doubt who the character is .The first book was a little slow for me but this one held my interest tell the end and I couldn't wait for the next book .