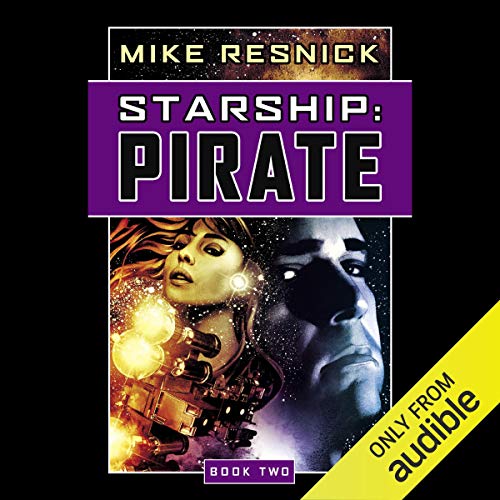 Captain Wilson Cole's latest exploit saved millions of lives but embarrassed his superiors. He is a man with a reputation for exceeding orders but getting results. Cole has found himself the victim of a media feeding frenzy, a political scapegoat despite years of dedicated military service. Faced with a court martial, he is rescued by the loyal crew of his ship, the Theodore Roosevelt. Now branded mutineers, the crew of the Teddy R. has quit the Republic, never to return.

Seeking to find a new life for themselves, Cole and comrades remake the Teddy R. as a pirate ship and set sail for the lawless Inner Frontier. There, powerful warlords, cut-throat pirates, and struggling colonies compete for survival in a game where you rarely get a second chance to learn the rules.

But military discipline is poor preparation for a life of pillaging and plundering, and Cole's principles limit his targets. Seeking an education on the nature of piracy, Cole hunts more knowledgeable players: the beautiful but deadly Valkyrie, the enigmatic alien fence David Copperfield, and the fearsome alien pirate known as the Hammerhead Shark.

Book 2 is worth taking a chance on if you had read Book 1 and thought it was a slow start.
It was. But Pirate picks up the pace and adds some interesting characters. The Narrator, Jonathan Davis, does an excellent job of allowing your imagination to believe you are listening to the different voices of all these characters.Forget the "he said, she said" complaint of a previous review, you'll be too engrossed with the action.

I liked Starship: Mutiny, but this second installment is a poor companion. The narrator was quite good, and the plot wasn't terrible. Unfortunately the author bombards us with constant, tedious reiteration of information from the first book ("We can't go back because we helped you escape...blah, blah, blah for three more sentences"). Some characters became unbearable, particularly Security Chief Sharon, whose main function in this story was to threaten to withhold sex from Cole and to pout. I was looking forward to a good series after Mutiny but am disappointed.

If you didn't like Mutiny, don't buy this one.
That said,
If you did like the first one, the story continues and gets better. Good pace, never boring. It has fun and funny characters, yet always belivable. These three books would have made a very fast paced 25 hour book. They are good enough to seem very short at 8 hours each.
And so,.. I am running back to download book 3.

Not for military sci-fi lovers.

I tried the first book in this series. It was the same.

These books are not for the hard science/military sci-fi lover. Too many things inconsistent with military and hard science sci-fi to be enjoyable for me. I kept getting taken out of the story by things that didn't work. (You can't have FTL travel *and* Newtonian physics applied at the same time to a starship. No naval officer gets command of a ship without knowing anything about how a ship works. You can't be both smarter than everyone else around you AND ignorant of the common things in your area of expertise.) The drama was too melodrama for my tastes.

Would you ever listen to anything by Mike Resnick again?

The writing, in general, was good and I've read other stuff by the author before that I liked. However, after two books from this series, I don't think this is the area of the genre that he should be writing for. It seems like military sci-fi written by someone who doesn't know military sci-fi for people who also don't know hard science military sci-fi.

Would you be willing to try another one of Jonathan Davis and Mike Resnick ’s performances?

Maybe, but not in this series.

What character would you cut from Starship: Pirate?

The Hammerhead is the main villain and I would cut that character. He was so over the top, I kept expecting him to stop, strike a pose, and twirl his mustache.

Great Story,lots of Action with Good Drama. Very easy to listen to. With Geat narration.

Much better than Starship Mutiny

This is the second book in Mike Resnick’s Starship series.

This book is much better than the first book Starship Mutiny, Mike Resnick’s sense of humor sneaks its way in, not as much as I would like, but it is present.

Even though I found this book not quite in the same league as Santiago or Widowmaker, it is a good read.

Starship #1 was rather nice to listen to.
But #2 was sweet could get enough I fell in love the the roles the added characters play as the book progress. "Just sweet"

I had to stop listening halfway through this non epic tale. No fault of the narrator, who is good, but this story is not only badly conceived but full of errors that evidently were overlooked by the editor. I was and still am terribly disappointed by the author's contrived plot, this scenario has been done before and better.

He phoned this one in

this book was a huge disappointment. The dialogue is corny and hokey. There is very little action. There's hours and hours of discussion of arcane minute detail that does nothing to move along the plot. I really think this was just one more book to make a buck.