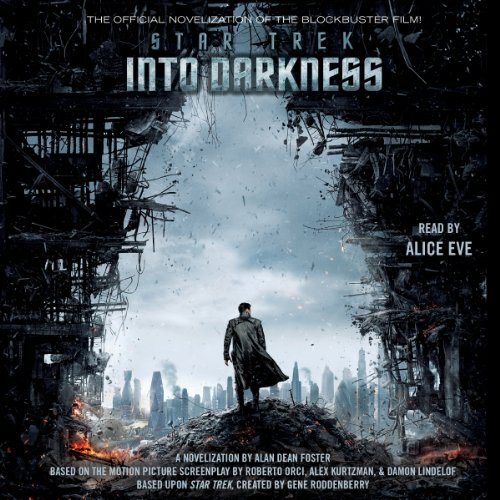 When the crew of the Enterprise is called back home, they find an unstoppable force of terror from within their own organization has detonated the fleet and everything it stands for, leaving our world in a state of crisis.

With a personal score to settle, Captain Kirk leads a manhunt to a war-zone world to capture a one-man weapon of mass destruction.

As our heroes are propelled into an epic chess game of life and death, love will be challenged, friendships will be torn apart, and sacrifices must be made for the only family Kirk has left: his crew.

Good story to go along with the movie! Yes, there are plot holes big enough to fly a Bird of Prey through, but hey! -- it's still entertaining and fun.

Alice Eve -- Carol Marcus in the movie -- was a questionable choice for narrating this story. I can't blame her -- she probably did the best she could. I fault the production team and director for signing off on poor narrative choices and inept characterizations. She didn't even bring any life to her own character's dialog. And worst of all, WHO in the world thought it was a good idea to represent Khan -- one of the most elegant antagonists in the Star Trek universe -- as a sneering, cackling cartoon villain? I almost expected him to offer Kirk a poison apple. Ack! I had to work too hard to overcome the narration and concentrate on the story.

This presentation is particularly disappointing after the terrific narration by Zachary Quinto for the first novelization of the new series.

Kudo's to Foster, Orci, Kurtzman and or Abrams. Whoever it is that is responsible for bringing back this series. These guys get it. They understand that what we like are the characters. The characters make the show, the movies and the books. In this book Kirk continues to show his hard headed, cheat if you have to side. Damn it Man, Doc is his cranky self. Scotty's character stands out in this one and I found him to be one of the most interesting members of the cast in this go around.

Without giving it away let me say they bring back a bad guy and a good guy. They do change the script a little, so sticklers for things being exact will not be happy. They have some references to Bradbury, Asimov and Clarke ( us old guys appreciate that). The story is a little weak, there are some things that just happen to happen the right way, but that is usual for movie books. I did not like this as much as the first Star Trek book by Foster, but the writing was still worth five stars.

What I don't understand is the narrator. First it is a female, second she is British. If you watched that series last fall on NBC, called The Neighbors, the good looking black alien, this narrator sounds exactly like her. Most of the characters as you know are male and this girl does not do good male voices. I am not against female narrators, I believe Kate Mulgrew would have done a good job. Her accent was very distracting at times. Sometimes Kirk was Kirk, but most of the time he was Kuck. McCoy and Spock had British accents. At times it was hard to figure out who was talking, almost everybody but Chekov and Scotty sounded alike. Spock emoted more then Kirk did, by her voice. Lots of times it sounded like a teen romance and I know that it was not the writing.

It is still worth five stars, it just could have been so much better.

It ranks up near the top, maybe in the top five for me.

What other book might you compare Star Trek: Into Darkness to and why?

I would compare it to other Star Trek books; it's a good story.

Who would you have cast as narrator instead of Alice Eve?

Damnit, I'm an actress, not a narrator!

The story is a good one. I really enjoyed Jonathan Quinto's narration of the first audio book. I enjoyed the movie also.

Alan Dean Foster does it again.

I have listened to many audiobooks in my time and feel that Into Darkness ranks in my top 10, but probably around 8 or 9th place. That ranking isn't based on a dislike of the performance by Alice Eve or the story. It is only based on the fact that there are a few that I simply enjoy more than this audiobook.

My favorite character in this story is the obvious choice, Jim Kirk. The story arc for the Captain is superbly told in my opinion. I had always thought it odd that after the events of the first story in the new "reality" that a cadet fresh out of the Academy had been given the Federation flagship. The opening events of the story set up a character conflict that serves to really help him grow into a "real" Captain and not just the "acting" Captain. Admiral Pike hits the nail on the head when tells Kirk point-blank that he doesn't respect the chair. Given his "passing" of the Kobayashi Maru and defeating Nero he had not had to suffer the loss that is required to refine a person into a solid leader. Having to "face the music" for his interference at the begining of the novel set up a loss/redemption arc where Kirk could gain that level of respect. And as the story plays out he was ready to sacrifices himself twice for his crew. An honorable mention to Spock for the internal struggle he has with his emotions in this story. Ultimately he forsakes logic for revenge which is something we never saw the "Prime" Spock resort to during his adventures.

I actually have two favorite scenes from the story. The first being when the Kirk realized that the Vengance was not on his side and he was ready to sacrifice himself for the sake of his crew. This was when the inner-child, the happy-go-lucky, no one can stop me Kirk died. that was the moment I think he truly changed.The second was during the interrogation that revealed the identity of Khan and described his invlovement in the Federation's research and development in trying to prepare for what they feel is a fateful conflict with the Klingons.

Yes and no. Yes because I love the story. But no because it is unabridged! That's too long for one sitting, but I love the full descriptions of the environments and the characters.

As I write this review I am a die hard, life-long Star Trek fan who is stuck in Afghanistan and cannot see the film in the theater. The audiobook provided a different window into the story and it was enjoyable to experience this story like this. The fact that it was narrarated by "Dr. Marcus" made it even better. She does well for most of the characters, however, she tries a little too hard sometimes to mix the new Kirk with the old Kirk's voice mannerisms. Into Darkness was an enjoyable listen and I plan to listen to it multiple times. I highly recommend it to anyone who loves Trek and enjoys getting into the "alternate reality" of some of our favorite heroes.

the narrator is not the worst I've ever heard but she makes absolutely no sense narrating a story where the two main characters are male. It grated. Also she speaks in what I think Brits call a posh accent EXCEPT for dialog which is all done with American accents, other than for Scotty, of course. Huh? To quote Spock, "Highly illogical." Brit pronunciations of common words detract from story comprehension for this American. There are occasional missing words.

Foster has written Star Trek episode and movie novelizations for something like 40 or 50 years. Great writing. Loved movie. Slogged through listening just because it cost me a credit and I liked movie.

Being an avid original Star Trek lover for over 54 years; I’m highly sensitive to the correct
re-enactment of the original Enterprise Crew’s characters and characteristics. The major discrepancy and what kept pulling me out of the disjointed story-line was the depiction of Captain Kirk’s character in each situation. Following his unbelievable change in character, speech, reactionary scenes and interactions with “beloved” crew members, was Lieutenant Uhura. Her character was written so out of character as to be unprofessional and subordinate in her station.

The story-line itself was disjointed, did not flow nor did it reflect the team-work and camaraderie of the crew. Yes, they had a few rough spots but the scenes as written here, would have had all of them thrown out of Star Fleet.

Unfortunately, the narrators voice and attempted mimicry of Kirk in particular, was like the proverbial saying “like fingernails scraping down a chalkboard.” I had to stop and start the story over eight times to get through it.

This is the first poor review I’ve ever given here on audible. If you listen to it and love it, please do post about it here!

A New Twist On An Old Story

This Adaptation of Gene Roddenberry's Story as seen through new eyes is very interesting, action packed and well written...
This is something that even the die hard Trekkies will enjoy...

The narrator for this book is frankly terrible, to the point of making it impossible to enjoy the book. She randomly engages in accents that disappear just as quickly as they appear. Her emphasis is all over the place, making it hard to engage in the story when every few minutes you are wondering what the hell she’s thinking emphasizing this random word or phrase. The meaning is lost, the mood is never consistent. She reads in a manner completely irrelevant to the story itself. I wished over and over for a way for the audiobook to become text to read through or to have a computer read off to me like the kindle used to with an ebook. Either would have been a severe improvement.

The story itself is not bad,y biggest complaint would be the author’s tendency to use of sometimes bizarre similes was really the worst of it (for example there was something like “it was as hard to spot as a bullet going through a barn” or it was the “the color of bruised (some mineral that might have been made up)” when it was just trying to say something was brown.

Otherwise the itself story was fine, doesn’t add much more to what was there in the movie, but it did give me a bit of a look into at least some of the character’s heads, which was why I bought it and roughed it out to the end.

If you are truly interested, I do t think it would be a bad read, but do yourself a favor and avoid getting this one as the narrator makes it unbearably awkward to middle through.

This was so disappointing. I’m sorry but Alice Eve was not the person to read this book. She makes every voice sound the same and puts almost no inflection in any of the dialogue. It’s a real shame cause the writing’g good.