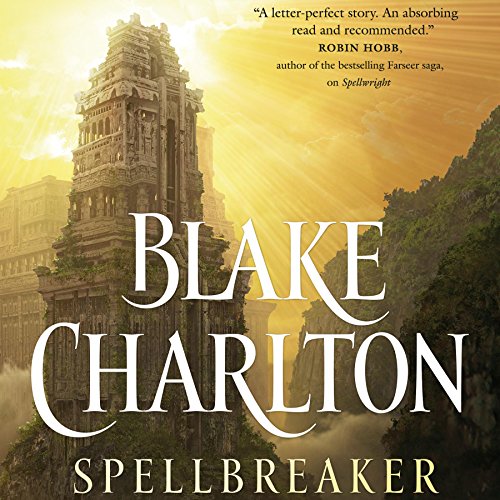 Leandra Weal has a bad habit of getting herself in dangerous situations.

While hunting neodemons in her role as Warden of Ixos, Leandra obtains a prophetic spell that provides a glimpse one day into her future. She discovers that she is doomed to murder someone she loves, soon, but not who. That's a pretty big problem for a woman who has a shark god for a lover, a hostile empress for an aunt, a rogue misspelling wizard for a father, and a mother who - especially when arguing with her daughter - can be a real dragon.

Leandra's quest to unravel the mystery of the murder-she-will-commit becomes more urgent when her chronic disease flares up and the Ixonian Archipelago is plagued by natural disasters, demon-worshiping cults, and fierce political infighting. Everywhere she turns, Leandra finds herself amid intrigue and conflict. It seems her bad habit for getting into dangerous situations is turning into a full blown addiction.

As chaos spreads across Ixos, Leandra and her troubled family must race to uncover the shocking truth about a prophesied demonic invasion, human language, and their own identities - if they don't kill each other first.

Spellbreaker is the long awaited sequel to Blake Charlton's Spellbound, which was listed by Kirkus Reviews among the Best Science Fiction and Fantasy of 2011. This final installment of the Spellwright Trilogy stands alone as a complete story; however, fans of the series will find in it answers to the questions raised by the previous books about Leandra's parents, Nicodemus Weal and Francesca DeVega.

So—
The story is ok. But plot and character development seem to have an inordinate amount of contemporary ism’ish dogma written into them; to the degree that it is distracting, and I find myself shaking my head at publisher social agendas, and wonder if Blake is really on board with what he’s writing, because the inclusions seem so awkward and out of place, that it slimes up the story, and I slip along with it, bumping virtual elbows as I bounce around the down slide.

Also, the narrator (in all 3 books) is quite tedious in his inflections... exaggerated the performance in a way that was aggravating. It was bearable at double speed though, and, —- since I heard about Blake from the book about dyslexia and it’s advantages, which suggested listening to books in double or triple speed, I thought it apropos and ironic: seeing as how I could never bare the narrator at normal speed.

Applauding the author for an original concept of magic, I give the book 3 out of 5 stars.

It was a page-turner. It had an excellent storyline, spectacular characters, and a satisfying finish.

Fantastic Ending to An Extraordinary Series

I was first introduced to the first book of this series by my librarian when I was in 8th grade. As I have grown into adulthood this series has followed me. Though Nicodemus Weal has definitely aged at a faster rate than I have, it has been amazing to read and listen to the changes he has experienced throughout his and his family's life, to look at my own experiences and to recognize how alive and realistically dynamic these characters are.

To have such writing and consideration of humanity in a series as action packed as this is a real treat to put it mildly.

This book in particular which primarily follows Nicodemus's daughter and her experiences has managed to not simply be a coming of age story, but rather has transcended that consideration and delivered a huge arcing story that is itself vastly more compelling.

Amazing trilogy coming to an end

I’ve very much enjoyed this delightful trilogy, and found the universe created within to be something that always made me regret when each listening session came to an end. The narrator did an amazing jobs and I will be looking for his name in the future as well !!

Only thing I didn’t love was the ending, I will spoil nothing and I will say that I still liked it - it just wasn’t the one I was hoping for :)