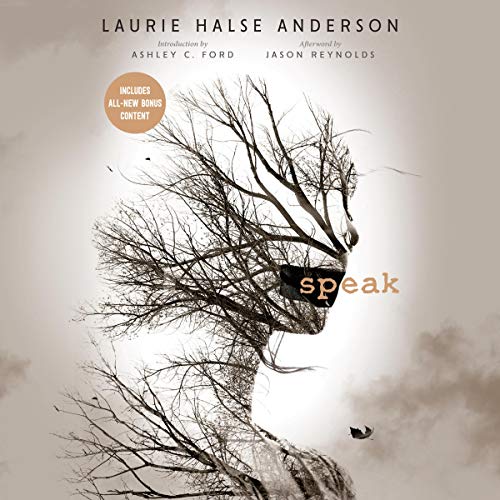 From her first moment at Merryweather High, Melinda Sordino knows she's an outcast. She busted an end-of-summer party by calling the cops - a major infraction in high-school society - so her old friends won't talk to her, and people she doesn't know glare at her. She retreats into her head, where the lies and hypocrisies of high school stand in stark relief to her own silence, making her all the more mute.

But it's not so comfortable in her head, either - there's something banging around in there that she doesn't want to think about. Try as she might to avoid it, it won't go away, until there is a painful confrontation. Once that happens, she can't be silent - she must speak the truth.

In this powerful audiobook, an utterly believable, bitterly ironic heroine speaks for many a disenfranchised teenager while learning that, although it's hard to speak up for yourself, keeping your mouth shut is worse.

This was my second time listening to this book but it was so long ago that I only remembered that it pulled me in and spit me out in one day. This time wasn't much different. I enjoyed the writing style and how most of the book takes place in Melinda's head. You knew from the beginning that she had issues but not what the issues were. Being in the mind of a troubled 9th grader is a tough pill to swallow but in the end she made me proud. This book touches on serious issues that teenagers deal with everyday including bullying, sexual assault and feeling completely alone so if you have triggers this might not be the book for you.

The narration was perfect in my opinion, very well cast.

Speak was about a tramatized teen learning to talk

I loved it, simply loved it. The Narrator was very Descriprive and the Story was very Inspirational

The voice could have more emotion.

This book has been and always will be one of my favorites but the narration could have had more emotion. This is not an easy story for people to tell so the voice should make it feel that way.

Well worth the purchase

The audiobook accurately reflects the angst, power and pain that the books brings forth. The reader of the books convinces you that she is Melinda and is in the process of experiencing all that the character she is portraying is feeling. I used this audiobook as an instructional tool and my students loved it.

Yes. The stereotypes are yawn-producing. Cheerleaders=pretty & shallow; Jocks=stupid and etc. I'd like to see authors have the depth and creativity to defy stereotypes. After hearing the tired cliches, it takes me a minute to return to the story.

The difficult subject matter contained just enough detail without being too graphic or gratuitous. Effective use of metaphors with garden and tree project. It's a good story to read w/your teenage daughter and have discussions about the scary topics of rape and depression.

Have you listened to any of Mandy Siegfried’s other performances before? How does this one compare?

Was Speak worth the listening time?

Yes. It was a solid read for a YA novel. I would recommend with only slight reservations. I enjoyed the narrator's performance.

So important to read this and share with teenagers

I enjoyed this book. This is a hard and uncomfortable topic for teenagers and adults. But it must be discussed, understood, and spoken about. When teenagers and kids are quite and don’t speak a lot, the silence speaks volumes and needs to be looked into. Great book.

why did it have to end!? I just wanted to keep reading and going more deep into it.

I loved reading the book, but hearing the book read was like seeing Melinda's story take on a whole new image in my brain. I could see the story play out like a movie and it was better than anything I've seen or heard related to this story.

I have listened to several hundred audiobooks and this was on of the best I had heard. I listened to this on holiday and it was so good I finished listening within two days.

This is a very fierce story! Very authentic. I could listen to it a million times. I have already read the book a few times. And know I'm addicted to the audiobook. It's read very well. You're instantly pulled into the story.

I wish you a good time in Merryweather High ;)