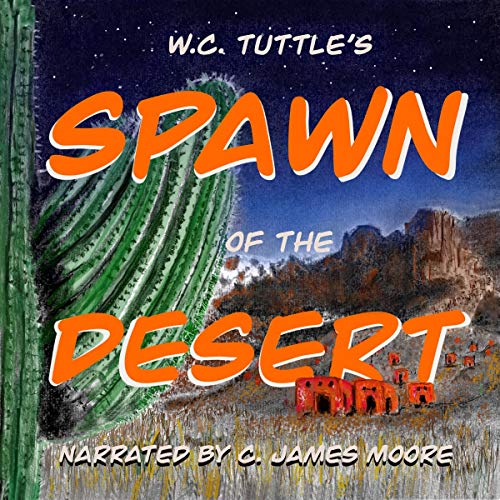 Spawn of the Desert

As tense, short story Westerns go, W.C. Tuttle's "Spawn of the Desert", set in the 1850s rugged Southwest mountains, is a splendid, fast-paced example of the classic genre of tales of gold and silver mining towns run by ruthless men, and inhabited by an eclectic population of miners, gamblers, gunmen, drunks, hardscrabble women, and the obligatory "colorful" characters. Tuttle (1883-1969) was one of the most prolific Western writers of his day, with more than 40 novels and short stories to his credit.

"Spawn of the Desert" takes place in Calico Town, an adobe-hued silver-mining town, carved out of the sheer rock face of silver-rich Calico Mountain, which rises almost vertically above the town. In its desert setting, the heat is unbearable, the rain never falls, and morals are in short supply.

Into this god-forsaken corner of the new West come two remarkable characters: the worldly-wise, heavily bearded, majestic Le Saint and his young partner, gunslinger Duke Steele. Over two ever-challenging days, the Saint and Steele take on the villainy of Silver Sleed - Calico's unchallenged boss - and wrestle with their compassion for Sleed's 20-year-old daughter, Luck. At the heart of the conflict is a tragic backstory of revenge that has driven Le Saint on a two-decade quest across the country.

"Spawn of the Desert" is narrated by C. James Moore, whose 2015 narration of Own Wister's sweeping Western novel, The Virginian, captured in thrilling detail the expansion of the West and the drama of Wyoming's vast cattle ranges, emerging cities, romance, and frontier justice. This short story "Spawn of the Desert" takes the listener on a fast-paced journey through the harsh, unforgiving landscape of the American West's legendary tales of riches, jealousy, pathos, vices, violence, and love.