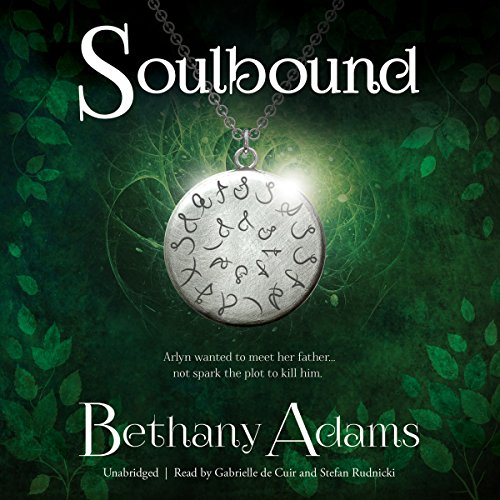 Arlyn's quest is simple: Find her father and let him know her mother is dead. After all, Arlyn had promised her mother she'd go. The problem? Her father's people are myths and legends, and he doesn't even live on Earth. But despite a long journey through the mysterious mists of the Veil, finding him turns out to be the easy part.

After 500 years, Kai has given up on finding his soulbonded. So when he stumbles across Arlyn after returning from his latest mission and recognizes her as his mate, Kai starts their bond in haste. But he never could have imagined that his bonded is his best friend's newfound daughter. Whoops.

A hidden conspiracy sparked to life.

Though the sight of Kai makes Arlyn's heart pound, she isn't sure she can forgive him for starting their bond without her permission. But her love life is the least of her problems. Her father is an elf lord, and his sudden acknowledgment of a half-human heir reignites the same conspiracy that took him away from her mother in the first place. Now Arlyn and her family must face iron-wielding assassins, bigotry, and her newly awakened magical abilities if they hope to come through in one piece.

Arlyn thought she would return to Earth after meeting her father. Now she must fight to save the family she never knew she wanted.

Somewhat. I did enjoy the setup and explanations of the culture, but unfortunately the romance was an afterthought at best. The summary had me expecting a marriage-then-love plot with some court politics, but what I got was a lot of background of the world the characters inhabited with little to no depth given to those characters themselves.

Would you recommend Soulbound to your friends? Why or why not?

Which character – as performed by Gabrielle de Cuir and Stefan Rudnicki – was your favorite?

None of the characters were especially relatable or lovable. They all felt shallow and one-note in their characterization. I would say Adams clearly had a favorite, because that character was given the most backstory and explanation of anyone, that being Lyr. While the author clearly meant for Arlyn to be the main character, she feels more like an alternate point of view to a story mainly revolving around her father.

Actually having spent time on said romance, for one. The summary implies that it is a main plotline but it is actually a background plot that receives little to no development. The characters are just suddenly "in love" with no buildup or effort. While Aryn is initially doubtful about the soulbond, after Kai is injured she is suddenly totally accepting of it. The two only have a handful of conversation in the entire book (most of which is just Kai explaining culture or history to Arlyn) but suddenly they are confessing their love to one another and falling into bed.

If you are primarily looking for a romance, this is really not the story for you. If you enjoy believable character depth & development, this is not the book you want. If you simply enjoy fantasy elven culture, you might really enjoy this book, because that is where the main focus is.

I would really prefer a narrator other than Gabrielle de Cuirass

I feel cruel writing this, but I feel compelled to do so. If you are fussy about the narrators of audiobooks, then you want to avoid this one. It was difficult to determine if I enjoyed the book. Every time Ms. de Cuir read, I found myself doing my best to not shut it off. I think it is a lack of her acting ability. Her inflection, intonation, and how she elongated words made it grueling to listen to. Finally, her voice of Arlyn was like that of a child/valley girl/annoyed teen. and not the voice of an adult.

Now, in Ms. De Cuir's defense of portraying Arlyn as an adult, Ms. Adams made her character too young for her age as well as her "soul mate." It was also difficult to believe a five hundred year old man would act like a teenager.

The female narrator did a good job with description and male voices but she made the female voice unbearable. I've stopped listening many times simply because I couldn't take the whining! She's supposed to be a grown woman, but she sounds pubescent. Book comes down 2 stars for me for that alone.

the narration didn’t work for me not their voice but how they lack passion behind their words. The story it self was pretty if a little confusing. I wanted more passion from the characters as well. World building was good and so was much of the background story. Just lacked passion.

having two narrators randomly switch kind of brings you out of the book it's a great book otherwise.

Lead is a dud

The story is captivating, nicely described scenes, and the elven characters are fascinating. The MC, however, is a bratty, whiny twerp. She approaches everything with a big chip on her shoulders while her father and soul bounded are nothing but polite and accommodating to her. I enjoyed the story but cringe a little every time she’s in a scene.

Feels like your comming in the middle if a story. it has potential, but there is too much going on and feels pressured. needs to do more story building, lengthen the book or break in to a multiple of books. Characters are not well developed and I was not invested in them.

This book does a good job of showing a sensitive yet strong male lead character. I wasn't sure about it at first but it's good.

If you are like me, another series is the last thing you need. But this one gets added to the list and gets bumped to the front end for priority too.

I’ve tried 3 times now and just can’t. The main character is so eye-rollingly dumb and annoying my eyes nearly roll into my brain every time she’s in a scene.

one would suspect a diffrent tale, but anyhow it wasnt bad at all, a fairytalestory one has to hear or read part two , to get the whole picture