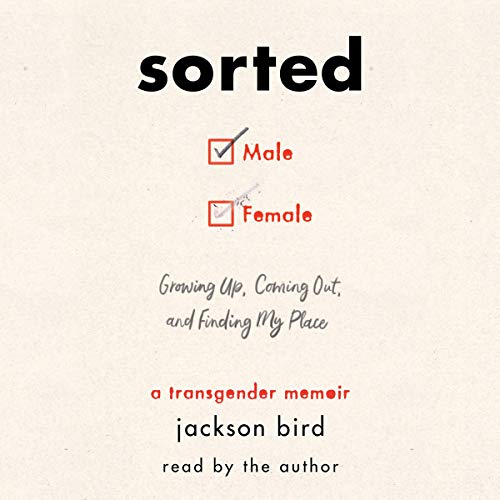 An unflinching and endearing memoir from LGBTQ+ advocate Jackson Bird about how he finally sorted things out and came out as a transgender man.

When Jackson Bird was 25, he came out as transgender to his friends, family, and anyone in the world with an internet connection.

Assigned female at birth and raised as a girl, he often wondered if he should have been born a boy. Jackson didn’t share this thought with anyone because he didn’t think he could share it with anyone. Growing up in Texas in the 1990s, he had no transgender role models. He barely remembers meeting anyone who was openly gay, let alone being taught that transgender people existed outside of punchlines.

In this “soulful and heartfelt coming-of-age story” (Jamia Wilson, director and publisher of the Feminist Press), Jackson chronicles the ups and downs of growing up gender-confused. Illuminated by journal entries spanning childhood to adolescence to today, he candidly recalls the challenges and loneliness he endured as he came to terms with both his gender and his bisexual identity.

With warmth and wit, Jackson also recounts how he navigated the many obstacles and quirks of his transition - like figuring out how to have a chest binder delivered to his NYU dorm room and having an emotional breakdown at a Harry Potter fan convention. From his first shot of testosterone to his eventual top surgery, Jackson lets you in on every part of his journey - taking the time to explain trans terminology and little-known facts about gender and identity along the way.

“A compassionate, tender-hearted, and accessible book for anyone who might need a hand to hold as they walk through their own transition or the transition of a loved one” (Austin Chant, author of Peter Darling), Sorted demonstrates the power and beauty in being yourself, even when you’re not sure who “yourself” is.

Books are better when read by the author. This is a real and needed recounting of a transgender story. Very inciteful.

A beautiful memoir to a courageous life.

Let go of your perceptions and be prepared to listen. Jackson courageous story can inspire anyone in the glbtiq+ spectrum to “just be....”. And be proud at it too.

An experience that helps bring perspective

This is a worthwhile book for anyone within the LGBTQ+ community, the straight community, all communities. Mr. Bird talks eloquently expressed his life, experiences, worries, fears, and joy. It's books like this that are exactly why we need books that deal with marginalized people to be written by the voices being marginalized.

As a trans man, it’s truly inspiring and down eight helpful to be able to read first hand and personal accounts of other guy’s transitions. I’m thankful to have loving and supporting friends but no one else quite gets it like a fellow trans person. Thanks Jackson! I highly recommend this book.

For anyone wanting to grow as a human being

I think the majority of individuals are curious to learn more about transgenders. This is a perfect book to not only explain what all the different terms mean, but a truly honest look at life, growing up, and becoming who you are meant to be.

Relatable doesn’t even begin to describe it.

Well written, well read, inclusive, and compassionate, I recommend Jackson Bird's "Sorted" memoir as interesting, entertaining, and emotionally moving reading for readers of any gender. Great pacing and structure, clearly spoken and easy to understand in the audiobook format. Love his puns in his book and on his merch.

I wonder how he's responded to J.K. Rowling's horrifying behavior this year. I'm going to check out more of his YouTube.

I discovered this book via his YouTube channel, which I had discovered through his clever merch store on the DFTBA website, a site that I found via a Lindsay Ellis link.

Helped me a lot

This book helped me understand that i am not alone. It is also good to have some trans related books. Perhaps there are "better educational" books about this topic but this is really good. This is a personal story and it is brave to share it without taboos. Thank you for that.

A Great Read for Anyone

Jackson did an amazing job with both the writing and the delivery. It sounded natural but entertaining, and kept my attention throughout. It was personally very relatable as a transgender person while also being educational for people trying to learn more. It even opened my eyes to some new feelings that I hadn't come to fully understand myself. Hearing about Jackson's own doubts and fears helped me confront my own. His book gave me the final push of courage that I needed to come out to my family and helped me on my long journey of finding peace within myself. If you're trans or questioning, or you know someone who is, or even just looking to broaden your knowledge and understanding, I highly recommend giving this a listen as well as looking at Jackson's other platforms. He is a gem.

I literally had to binge it one go, because of how good it was. I learned a ton and it kept me thinking for days on end. Absolutely recommend it to everyone!