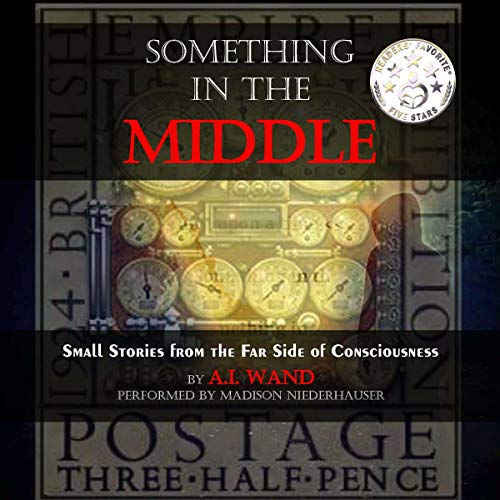 Something in the Middle: Color Edition

A first-time author. A hotshot book editor. A whirlwind romance and a runaway bestseller nobody saw coming. The meteoric rise and sudden collapse of a cross-platform media empire. All of this - plus a basement full of undiscovered treasures left by former tenants - is thoughtfully unpacked and dusted off in this sideways collection of small, strange fictions. SITM is a light-hearted 44-story collection of mostly free-standing stories surrounding a framed narrative that explores how these tales were created.

In SITM, A. I. Wand takes you on a journey with his unusual, sometimes poignant, often hilarious tales designed to surprise and delight. It pays gleeful tribute to legions of its science fiction, horror, satire, parody, and romantic forebears from the last century.

The subtitle - Small Stories from the Far Side of Consciousness - alludes to the book's atypical architecture and often surreal tone. In the 1960s and 1970s, it may have been dubbed post-modern or even experimental, but today, SITM is happy just to think of itself as a grateful homage to its myriad inspirations, albeit one which falls two or three standard deviations from the mean.

Many of these yarns could be confused with microfictions based upon their length, but they are part of a larger, cohesive arc that binds them all together. Many of the stories have Easter eggs or overt references to other stories. Drawing thematic elements from Aesop's Fables, The Twilight Zone, and classic Silver Screen horrors, these quirky, fast-paced fictions are also indebted to cartoons and comic strips, TV sit coms, and even to rock opera and pop music song suites.

In SITM we encounter a diversity of characters - witches, a voodooist, a mad scientist, a demented surgeon, a sadistic psychiatrist, a crazy clown, and even pets. These fast, atmospheric stories are sometimes self-aware, sometimes break the fourth wall, and frequently deliver satisfying, thought-provoking endings that linger for a while and invite a second look.