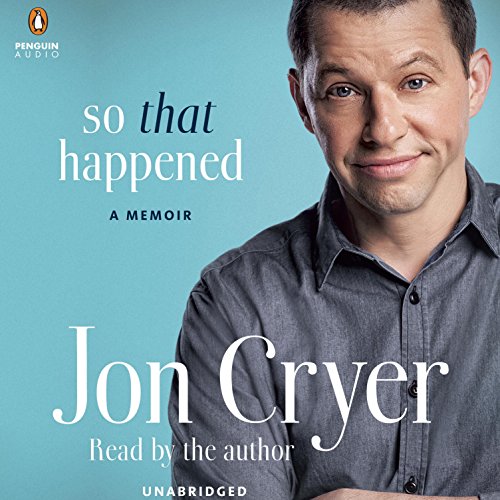 If it can happen in show business, it’s happened to Jon Cryer. Now he’s opening up for the first time and sharing his behind-the-scenes stories in a warmly endearing, sharply observed, and frankly funny look at life in Hollywood.

In 1986, Jon Cryer won over America as Molly Ringwald’s loyal and lovable best friend, Duckie, in the cult classic Pretty in Pink in a role that set the tone for his three-decade-long career in Hollywood. He went on to establish himself as one of the most talented comedic actors in the business, ultimately culminating in his current turn as Alan Harper on the massively popular sitcom Two and a Half Men.

With the instincts of a natural storyteller, Cryer charts his extraordinary journey in show business, illuminating his many triumphs and some missteps along the way. Filled with exclusive behind-the-scenes anecdotes, Cryer offers his own endearing perspective on Hollywood, the business at large, and the art of acting.

Cryer has worked with some of the biggest and most provocative names in the business, and here, for the first time, he details his experiences with Charlie Sheen, John Hughes, Robert Altman, Molly Ringwald, Demi Moore, Judd Nelson, and Christopher Reeve, among many others. He shares the intimate details of his friendships and relationships, pays tribute to his mentors, and explores the peculiar combination of heart, talent, and wisdom it takes to survive not just the bad times in a notoriously fickle industry but even the good times.

In this revealing, humorous, and introspective memoir, Cryer offers listeners a front-row seat as he reminisces about his life and experiences in showbiz over the past 30 years.

"Completely entertaining. Cryer addresses Charlie Sheen’s fall from grace to the reader’s satisfaction, but the real gems are the insightful, self-deprecating tales from Cryer’s own career, from Pretty in Pink to Two and a Half Men’s 12-year-run." (GQ)

So much more than just TWO AND A HALF MEN!!!

Thank you, Jon Cryer, for sharing this with your fans! As a long time fan of Jon Cryer and Two and a Half Men, I couldn't wait to get my hands on this book. I've been on the set many times, met Jon, and have several friends who work on the show, so I thought I knew quite a bit already. But Jon was so open and candid about so much in this memoir that I ended up learning way more than I ever imagined, especially about Jon's earlier life. Jon's own self-spoken words describing the events in his life up to now make this an excellent choice on Audible. I absolutely loved and appreciated all that he had to say and share. Jon had a lot to say, but he did it all with honesty, enthusiasm, heart, and class. Jon, if you read this, I loved your book so much I read it start to finish from the time I got in my LAX-FLL red eye, through my first day at sea on my cruise lol! But seriously, it is THAT good! If you're a fan of Jon this is definitely a MUST read!

I loved Yes, Please and Bossypants (jeez what acts to follow!) and downloaded Jon Cryer's book with pretty low expectations (sorry Mr. Cryer). I was then emotionally hijacked and taken on an Oz-like journey through a world I'd thought I'd kinda understood after decades of watching movies and TV. I had no clue! I've never been a fan of Two and a Half Men, and fortunately this story only spent the time it had to talking about the show and Charlie Sheen, and somehow Mr. Cryer even managed to make that topic interesting news. His writing voice is sincere and honest and peppered with the perfect amount of sarcasm and warranted disrespect. His observations into his world and insights into humanity in general are fresh and totally non-celebrity-ish. And his narration had me roaring out loud in my car. I plan to call my aging and forgetful brain into full action so that in a month or so I'll be able to listen to it all again, as if for the first time. Actually it is so good I may actually be OK re- listening without needing to purge my memory! If you've ever suspected that the world is just a giant video game, or even if you haven't, you owe it to your brain to enjoy Jon Cryer's performance. Bravo! And thanks.

Who knew Jon Cryer was so interesting?

Would you listen to So That Happened again? Why?

Yes, definitely! This may be the best audiobook I've ever listened to, his performance is funny and compelling and well edited all the way through. I would definitely listen to it again, for that reason alone. The content was very surprising, a little self-selfing; but his performance was better.

What was one of the most memorable moments of So That Happened?

Jon Cryer talking about briefly dating a coked out young Demi Moore, who occasionally drove with an open beer in her hand. Also, obviously, the #WINNING era Charlie Sheen years. But his own childhood and life experiences in New York might be better than any name dropping he could do.

He really committed, speaking evenly, with excellent enunciation, a few funny impressions, including a brief Brando, and just a general gusto for his story that enriched my interest and my opinion of him as a performer.

"Ducky Did Other Things"

I highly recommend this book to anyone with an interest in Hollywood and show business. anyone who has an appreciation for stage and musical theater, or who has done it themselves will really enjoy Cryer's perspective. 10/10

I loved everything about the story. How he grew to love acting and how his career took off. I also loved all the little "asides" in the book and the way Jon injected life into the book with his performance.

This book made me smile and unfortunately laugh - sometimes in the most inopportune moments ... like on a crowded subway train during rush hour. Laughing out loud or snickering uncontrollably while other people stared at you is a happy side effect of listening to the book.

Jon needs to write/recite another book. Fiction .. Non-Fiction .. it doesn't really matter. I believe his creativity, wit and talent will make his next book a joy to read/listen to.

loved this. there were some laugh out loud spots. Jon Cryer is an entertaining narrator telling a well written story

Jon Cryer has it all

Not only is Jon Cryer a great actor, he's a great reader as well. I enjoyed my 8+ hours with Jon in my car while traveling. I never knew how many movies and how much theatre he was in. Jon seems to be well grounded with his career and his life. So happy he gave me 12 seasons of 2 1/2 Men, I loved every episode. The fact that Ashton Kutcher slid right in and show just got better is a tribute to Jon's sincere desire to always do his best and work toward the greater good of the show and not his own agenda. So there Molly Ringwald!

I hated Jon Cryer when I started this book ...

... but I must confess that I found his story and narration quite enjoyable. I thought I would be in for a book of Charlie Sheen gossip, but it was a very entertaining story of his life and I have a new respect for him.

His story telling was quite good and it very quickly separated him from his Alan Harper persona that I have grown to despise. Well worth the listen.

Jon, I take back all the nasty things I once said about you.

I usually shy away from listening to books read by the author (except for David Sedaris) but I was pleasantly surprised by how well Jon Cryer did. I thoroughly enjoyed the book even the parts about Charlie Sheen and 2 1/2 Men which I was least interested in. Well written and read.

That was a fun ride…

I thoroughly enjoyed this audio book.
Jon Cryer is seriously an excellent story teller and kept me hooked from start to finish 🏁.

Thank you dude you made my night.

If your looking for biography of a man's rise to fame with honest to goodness stories of ups and downs then this book will do you justice.

This was the best biography I ever read. It was insightful on how theater, TV, and movies are made. I also feel as I got to know who Jon Cryer really is. Hearing him recount the stories of his life in his own words and voice was awesome. I loved the fact that he owned to the mistakes he's made and learned from them. I also enjoyed hearing his side of certain stories. Thanks for all the entertainment Jon. I've enjoyed watching you for years and look forward to many many more.