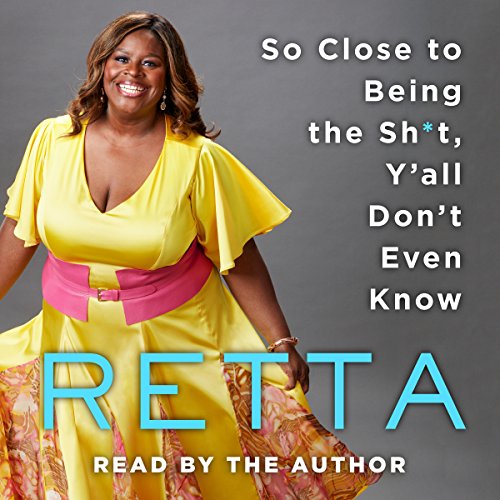 So Close to Being the Sh*t, Y'all Don't Even Know

So Close to Being the Sh*t, Y'all Don't Even Know

"This book feels like a real conversation. When we enter Retta's world we are at the best party and in the hands of a gracious, self-perceptive, and deeply hilarious host." (Amy Poehler)

In this hilarious audiobook essay collection, Parks and Recreation star Retta shares the stories that led to her success in Hollywood.

In So Close to Being the Sh*t, Y'all Don't Even Know, Parks and Recreation star Retta takes us on her not-so-meteoric rise from roaches to riches (well, rich enough that she can buy $15,000 designer handbags yet scared enough to know she's always a heartbeat away from ramen with American cheese).

Throwing her hardworking Liberian parents through a loop, Retta abandons her plan to attend med school after graduating Duke University to move to Hollywood to star in her own sitcom - like her comedy heroes Lucille Ball and Roseanne.

Say what? Word. Turns out Retta might actually be on to something. After winning Comedy Central's stand-up competition, she should be ready for prime time - but a fear of success derails her biggest dream.

Whether reminiscing about her days as a contract chemist at GlaxoSmithKline, telling "dirty" jokes to Mormons, feeling like the odd man out on Parks, fending off racist trolls on Twitter, flirting with Michael Fassbender, or expertly stalking the cast of Hamilton, Retta's unique voice and refreshing honesty will make you laugh, cry, and laugh so hard you'll cry.

Her eponymous sitcom might not have happened yet, but by the end of So Close to Being the Sh*t, listeners will be rooting for Retta to be the next one-named wonder to take over your television. And she just might inspire you to reach for the stars, too.

"Two things - 1) Don't yell 'Treat Yo Self' at Retta if you see her in person, a lot of people have done that already, just whisper it to yourself and give her a thumbs up. That'd be cool. 2) Check out her book. Stop reading this quote and buy it already, boo boo." (Aziz Ansari, best-selling author of Modern Romance)

I devoured this audiobook

When I saw that Retta had written an autobiography, and that she was narrating it on an audiobook, I thought (predictably enough) "Treat yo'self!"  I loved her as Donna Meagle in Parks and Recreation, and am enjoying the heck out of her semi-dramatic turn on Good Girls where she's breaking my heart as well as making me laugh. But I knew absolutely nothing about Retta, and I wanted to.

Turns out, she is the daughter of Liberian immigrants, a Jersey girl, and one of the most down-to-earth celebs imaginable. She is brutally honest about herself --  Chapter 8 in which she describes at length how lazy she is is both hilarious and reassuring because so much of it describes me too.  I loved listening to her talk about her passionate love for "dark magic" (coffee) and the day she (unknowingly) was flirted with by Michael Fassbender.  I love how much she loves John Hamm and her Parks and Rec co-stars, how much she loves her family, but doesn't spare them from her cutting sense of humor, and how much she loves her designer handbags.  Because she's a big girl, and handbags always fit.

I love listening to her.  Just flat out love it.

I devoured this audiobook in less than a day and wish there was more. Maybe one day there will be. Maybe one day we'll get the continuing adventures of Retta in H'wood, or even Dr. Retta, neurosurgeon (She was pre-med before she went into show business.) No matter what she wants to talk about, I'm there.

I have a two hour train commute daily so I enjoy the good audio book to pass the time. This. Book. Is. Hilarious. I know people say they “lol” but for real, I laugh out loud. I imagine I’d laugh if I was reading the physical book but man, hearing it in Retta’s voice makes it so much better. Anyhow, people look at me like I have ten heads from laughing so hard. I don’t care because, well, train people are wayyyy weirder than I am!

Look- you wanna laugh? Listen to this book. 🙌🏻

Even if you have no earthly idea who Retta is (like me), this book is relatable, insightful, and most of all, downright funny. Not like smile and nod your head funny. No, it’s like you forget that you have command of a 3,000 pound metal mini-tank capable of committing quite a bit of destruction when you close your eyes belly-laughing and bounce off the concrete retaining wall then over correct into a smart car which then veers in front of a semi that jack knifes funny. Get it?

It does not matter if you don’t know who the author is because the material is just plain funny. What you will finish with is a desire to join Snapchat, binge watch “Parks and Recreation”, and figure out why in the hell you didn’t go see Hamilton when you had the chance. Just purchase the audible. You’ll see. You’ll see.

Retta Does It Betta

Hearing her narrate her own book is wayyy better than just reading it! She's hilarious!

My SPIRIT person! Lol'd the whole way through it!!

Fun to listen too. I could just imagine the faces she was making telling these stories!!! Laughed out loud a lot!!!

amazing book through and through. Retta is a wonderful, beautiful, exciting breath of of fresh air in a time of negativity and uncertainty. thank you for sharing your stories.

This is a performance!!

Retta doesn't READ her book, she's on stage with it. And it's a great show. The good and the bad come out, hints at apprehension and self-doubt give way to great confidence and silly circumstances - - in other words, it's like LIFE. Love her, love the stories, and feel like I just made a bestie.

It was interesting to hear how the famous interact but it got to be too clicky and she’s too into trends and fads and it got a little annoying to listen to her use all the millennial vernacular. It was an ok read.

and listen to this book! Retta is the shit. Retta loves Hamilton. I had fun listening to this.

loved Retta and you will too. but if you are not into handbags of hockey like I am you may find yourself checking how much time for the next chapter. I'm so glad I got the audio book. her voice is amazing and funny.