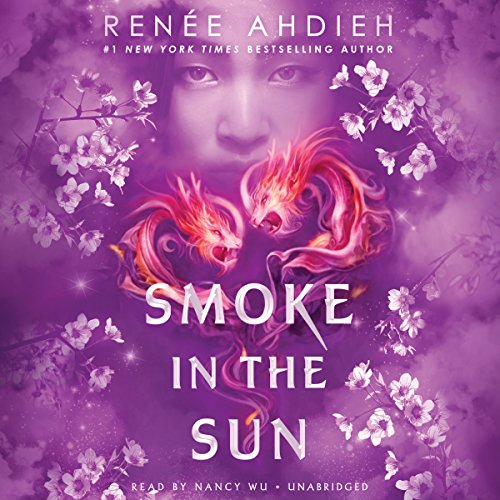 Smoke in the Sun

The highly anticipated sequel to Flame in the Mist - an addictive, sumptuous finale that will leave listeners breathless, from the best-selling author of The Wrath and the Dawn.

After Okami is captured in the Jukai forest, Mariko has no choice - to rescue him, she must return to Inako and face the dangers that have been waiting for her in the Heian Castle. She tricks her brother, Kenshin, and betrothed, Raiden, into thinking she was being held by the Black Clan against her will, playing the part of the dutiful bride-to-be to infiltrate the emperor's ranks and uncover the truth behind the betrayal that almost left her dead.

With the wedding plans already underway, Mariko pretends to be consumed with her upcoming nuptials, all the while using her royal standing to peel back the layers of lies and deception surrounding the imperial court. But each secret she unfurls gives way to the next, ensnaring Mariko and Okami in a political scheme that threatens their honor, their love, and very the safety of the empire.

“If the first book in this duology (Flame in the Mist, 2017) was a slow burn, this conclusion is all action...Mariko is a heroine worth following to the thrilling conclusion.” (Booklist)

“A well-written, lavish conclusion to the dreamlike world created in Flame in the Mist.” (School Library Journal)

I pre-ordered this book a long time ago, and was thrilled when it was finally released. Unfortunately, it was a big let down. Where do I start with the problems? -Kanako is the main villain, but her role in the ordeal is never uncovered -Roku, the secondary antagonist, is probably being mind controlled by Kanako, but this is never revealed and nobody cares -The emperor, who was being controlled by Kanako when he killed Ranmaru's father, is never discussed -Raiden gives Ranmaru his sword, title, and lands back with no negotiation, for no real reason. Yes, he gets humanized in this story. Just because he isn't a bad person, it doesn't mean he would just give the main characters everything they want. He never says that his father's persecution of Ranmaru's father was wrong. Why does he have to "make it right" then? It's also hugely anti-climactic. -Yumi is now Tsuneoiki's sister, which confused the heck out of me at the beginning of the book. Wasn't she Ranmaru's sister? I know Ranmaru told Mariko that she was his sister, but held back some information to "test her loyalty." How the heck would that test her loyalty? -Yumi, who was a foil to Mariko because she was ultra-feminine and helped the rebellion through means other than fighting, is now a badass ninja warrior, who resents her brother for not letting her fight. Basically she is Mariko. -Yumi and Mariko decide to have a "girls night out," even though Mariko will be killed if anyone notices she is missing from a public venue, with multiple guards assigned to watch only her. This is so stupid, and actually I hate every scene with Yumi. Oh yeah, Yumi is in love with Ranmaru now. Even though the audience is still trying to figure out if they are brother and sister. -The book says that because Ranmaru and Tsuneoiki have demon powers, they can never have children. Then the book hints that Mariko is pregnant, and Ranmaru loses the ability to control his demon powers. Then the whole sub-plot is dropped, and never mentioned again. The ending with Raiden is the most egregious part. Anti-climactic and unsatisfying.

I was looking forward to this sequel and enjoyed most of it, but the climax and resolution felt very rushed. It felt like there was supposed to be a third book and everything was instead wrapped up a little too hastily.

With this being the second part of the Flame in the Mist duology. I am going to keep this super short so I don’t spoil the story if you have not read it yet. Mariko is no longer having to pose as a boy but she has to don an even bigger facade in this installment. When she reaches the capital she is thrown into court politics and she is expected to carry on with the arranged marriage. Mariko has to balance her heart and her duty. Mariko shows how clever she is as she tries different ways to try to free Ōkami. I loved it when we got to see private moments between Markio and Ōkami., the way he spoke to her just melted my heart. Renée Ahdieh’s writing is just beautiful and I loved how I felt like I was being transported to feudal Japan.

Was a very well written story. It did seem to drag on quite a bit for my when compared to the first in the duology. A very sweet ending to the ride to make it all better!

Excellent narrator, smoothly produced. The story is really beautiful. I enjoyed it a lot. Looking forward to more from this author.

I picked up the first in the series because I loved the narrator (Nancy Wu), and ended up loving the writing and stories just as much.

This book was just as great as the first. I loved it. I'm adding it to my favorites of 2018.