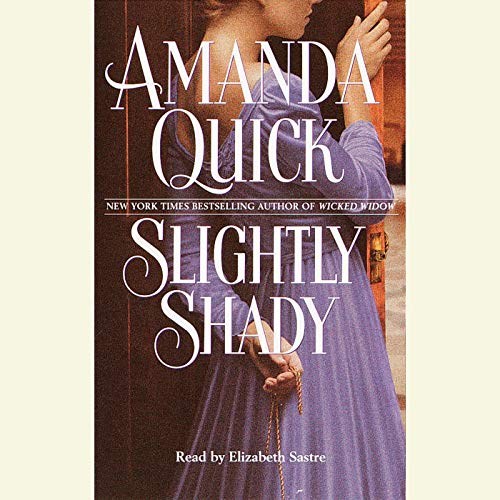 Amanda Quick's best-selling trademark is a combination of suspense and passion in historical tales alight with sparkling wit and brimming with dangerous intrigue. Now she serves up the most tantalizing novel of her career as an enterprising woman allies herself with a mysterious spy, only to be caught in a seething brew of treachery - and temptation....

From the moment he burst into her antiquities shop in Rome, Lavinia Lake knew the stranger was nothing but trouble. He said he was in pursuit of a killer. He swore he was only trying to save her. Yet no matter what he claimed, Lavinia was convinced that Mr. Tobias March was bent instead on destroying her. And when the self-described spy hustled her and her niece out of the shop and back to England, Lavinia could only hope that one day she would would find a way to repay Mr. March in full.

But Lavinia never imagined the shocking circumstances under which they would meet again...or that soon he would become more deadly - and more compelling - with each passing day.

In the business of making private inquiries, Tobias March had been hired to trade down a powerful villain who even now was intent on assuming control of a vast criminal organization. Yet in his search he had found nothing but one dead end - and one dead body - after another.

And then, just as his investigation was heating up once more, he found his mission and his life complicated by the most ungovernable, unpredictable, exasperating woman he had ever met.

Faced with a tangled web of deceit and danger, Tobias had no choice but to form a partnership with Lavinia, a lady whose past could only be described as slightly shady. Yet when he persuaded her to become his associate, neither Tobias nor Lavinia realized that their heated disputes would spark a sizzling desire - or that the deeper they kept digging for the truth, the deeper they were digging their own graves....

"Spirited heroines and sardonic heroes populate this sexy Regency-era thriller by the ever reliable Quick...Quick offers the parry and thrust of danger and romance.... Works splendidly." (Publishers Weekly)

This book had a good beginning, so I bought it on strength of the audio clip. What a disappointment! From then it was downhill all the way. The characters are unbelievable. The dialogue is stilted. The plot is hackneyed. Worst of all, this is supposed to be a historical romance but because it gives no idea of setting or background, I was imagining the characters in modern clothes until well into the story. I've heard some wonderful books via Audible, but this was definitely not one of them!

If you read the other 2 books (like me) and decided to go back to the beginning to "catch up", don't! The other books in this series are unabridged, for whatever reason this one is abridged and badly. The story hop, skips and jumps with seemingly little reason. I swear this recording even starts in the middle of a sentence! I'm going to get the book out of the library, I'm sure it's a fine book - just don't waste a credit on this pitiful abridgement!

Not fantasy or paranormal

Amanda Quick shows up as a fantasy writer but this series is not one. It is about an opinionated male and female and the closest link to paranormal or fantasy is in the mention and not so sucessful use of hypnotism.

I've always liked this author, but I've been leery of getting into the Lake/March Series; don't know why. I'm glad I did. Very entertaining-tough to put the iPod away! Narrator was good, keeping the different voices consistent through the story. I look forward to continuing the series. I should have known Ms. Krentz/James/Castle/Quick would deliver. Nicely done!

This is the first book of a series with Tobias March and Eugenia. I absolutely loved this book and will return to it many times as one would a classic movie. I have gone on to read other books in the series, but love this as the first book that introduces the major characters.

I like a good story but grphic sex doesn't do a thing for me. Too bad, it could have been a moderately interesting story but I'm a rated G kind of person. Not for me or those who like me don't need the sexual innuendo or description.

If you could sum up Slightly Shady in three words, what would they be?

I love romance and mystery, so this was perfect.

What other book might you compare Slightly Shady to and why?

What does Elizabeth Sastre bring to the story that you wouldn’t experience if you just read the book?

It's more dramatic when she reads.

I loved this story.

I don't normally like abridged books, especially by this author. The abridged versions of this author are usually choppy and disconnected, but I was pleasantly surprised by this book.
I took a chance on this book since its the only version available. This book is the first in a trilogy about these characters, and I had read this one but not the others. I got all three from audible, thinking that since I had read this one years ago I could at least get a feeling for the characters again. I was very pleased that all the major plot points were covered.
Great book I really enjoyed it, they did a great job! Really brought the characters to life!
Be sure to get Late for the Wedding, and Don't Look Back for more on Lavinia and Tobias.