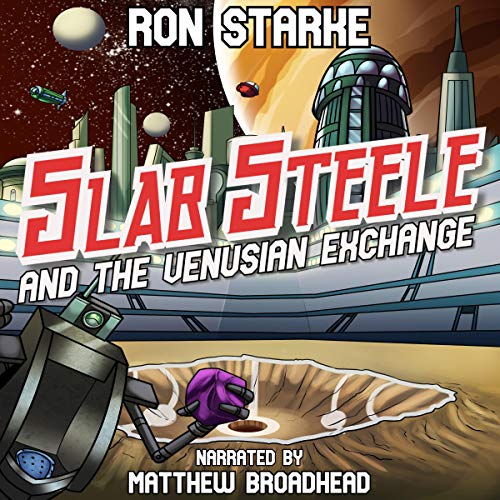 Slab Steele and the Venusian Exchange

What happens when a dimwit jock, a sentient toilet, and a man who’s technically more cheese than man get stuck together? Well, let’s just say urine for a wild ride!

Slab Steele’s life is in a rut. Once the hottest craterback prospect coming out of Texas Space University, Slab is staring 30 in the face with nothing to show for it. Worse yet, his craterball career is circling the bottom of the bowl like yesterday’s grilled cheese sandwich. But things are about to change.

On the eve of the biggest match of the season, a pair of mysterious strangers draw Slab into their web of weird. Lost, confused, and unable to figure out why he’s been taken, Slab Steele is forced to make some hard choices - a tall order when everyday thinking already stretches the limits of his brain power.

Follow Slab on an absurd, toilet-humor-filled adventure across the Solar System, in which he’ll confront a ghost from his past, meet a hero from his present, and ultimately come to terms with a future unlike any he has ever known - all while trying to make it to Venus in time for the Crater Bowl.

Filled with dad jokes and shameless puns, Slab Steele and the Venusian Exchange is a perfect listen for fans of Guardians of the Galaxy, Galactic Football League, Space Team, and the greatest sports films of the '80s and '90s. Dive into the Worlds of Craterball today!

Good read on its own. Hearing the unique characters come to life in the audio version added a new level of enjoyment and hilarity!

Ok, let’s start by saying this book is not for everyone, you’ll either like it or not. Personally I almost quit the book after the first few chapters, but I’m flaring glad I finished it.

I think the book is actually very well written and perfectly narrated, even though it might be the cheesiest book I’ve ever listened to. Think hitchhikers guide to the galaxy crossed with a big smelly Swiss cheese. For me the smelly cheese stopped smelling bad after a while and started to taste good as well, and in the end I’m hoping there will be a book number 2. Maybe Wizz will find his number two? I imagined the main character as the tiger king, which actually made the whole thing funnier.

If you enjoy cheesy comedy, then try this book, if you are flaring death interested in serious topics stay away.

A great and fun sci-fi book. Lots of great humor and the narrator delivers it very well. I highly recommend!

This is one of the rare sci-fi comedies that is well written and well produced. It's got some hilarious parts to it with a ton of laugh out loud moments and scenes that the narration really brings to life. That said, the beginning does take a while to pull you in, but the middle and ending are well worth it. Plus, it's so long it's like getting 2 books to listen to so overall I'm definitely hoping there is a sequel.

Okay, if you have an appreciation of some utterly bizarre and funny sci-fi with unexpected and clever twists and turns, Give Slab Steele a listen. The story itself is a lot of fun - Ron Starke crafted a ridiculously fun world. And the narration for that world is great - Matthew Broadhead really did a nice job with the characters on this one.

If you want great "literature" go listen to War and Peace. If you want a rollicking fun space adventure that has its tongue firmly in cheek, give Slab Steele a go and enjoy the ride.

A must listen bruh!!

A well told story read by a real straight shooter Mathew Broadhead, trust me I wouldn’t pull your string. The way he brings each character to life with the different accents is right on target. Once you start it you’ll whizz right through it!

What a hilarious story! If you're looking for a great listen, this is it, bruh.

took me a bit to get started but once I got into it I really enjoyed it. looking for something new to pass the blues? check it out!!!

Sup bruh? You decided to check out this flaring review to see if this def is worth it? Well Sol dammit, I guess I have to tell you my flaring thoughts then!

Do you like Sci-Fi? Do you like sports? How about toilet humor? If you answered yes to all of those, then this book is for you. You will get a good chuckle out of it and Matthew Broadhead does a fantastic job narrating this flaring book that you will lose yourself in the moment. I personally am not a huge sports fan but the first 55 chapters rarely deal with sports so it was still enjoyable. The last part of the book is more sports heavy and I found myself drifting off and thinking about other things while it was happening. I do not follow sports so when they call positions or plays I have no idea what they are talking about. The book ends nicely and wraps everything up so if you are looking for a 1 book adventure then check this out!

The characters are alright with the exception of Wizz whom was my personal favorite. If he was not in this book I think I would have stopped listening to it awhile ago just because the main character is someone that gets on my nerves at times. The main character is the not-so-smart jock type and just seems to lack common sense at times. I downright hate the "Villain" in this book just because his dialog was really annoying to me. How many times can we say "Well"? Lets find out! I feel that if that part of his dialog was cut then he would have been a very solid character.

The overall story was pretty good with some interesting moments. The humor is what helps to keep the book alive and what kept me listening. How can you not laugh at a talking urinal? The romance between 2 main characters was also well done and I overall liked their banter with each other. This isnt a love story - so dont worry. It just adds depth to the characters and overall story.

Would I listen to this again? Probably not anytime soon. I may listen to it again 5 years from now if I am looking for a good laugh. Was it worth at least 1 listen? Flare Yeah Bruh! I don't feel like my time was wasted and overall it was enjoyable. I really enjoyed the special features part at the end with Matthew busting up laughing at his mistakes during his recording. I really wish more audiobooks did this!