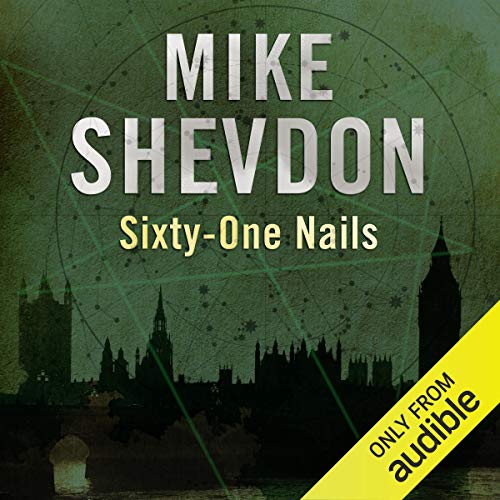 There is a secret war growing beneath the streets of London. The immense Sixty-One Nails follows Niall Petersen, from a suspected heart attack on the London Underground, into the hidden world of the Feyre, an uncanny place of legend that lurks just beyond the surface of everyday life. The ancient peoples are at war - but is Niall really the one who can wield the dark magic of the Untainted, and save them all?

Mike Shevdon lives in Bedfordshire, England, with his wife and son, where he pursues the various masteries of weapons, technology, and cookery. His love of fantasy & SF started in the '70s with C. S. Lewis, Robert Heinlein, and Isaac Asimov and continued through Alan Garner, Ursula Le Guin, and Barbara Hambly. More recent influences include Mike Carey, Phil Rickman, Neil Gaiman, and Robert Crais, among many others. He has studied martial arts for many years, mainly aikido and archery. Friends have sometimes remarked that his pastimes always seem to involve something sharp or pointy.

Urban Fantasy with a Gothic Flavor

Sixty-One Nails is a nice introduction to a new series, The Courts of Feyre. This opening book is set primarily in modern-day London with a likable everyman protagonist who suffers through the world's toughest midlife crisis. Sixty-One Nails blends the tropes of urban fantasy with old-school folklore about the Fey and Feyre (how many ways can you spell Fairy - let me count the authors) and mixes in some fascinating English history to create a unique fantasy adventure. The plot is fast paced with a lot of action, but not a lot of violence. The city of London, the surrounding countryside, and the rich English history are all used quite effectively to set the tone and to drive the plot. The writing is strong with a lot of evocative language to build great mental pictures to enhance the story.

Much of this first book is really about Niall Petersen (Rabbit), a middle-aged Joe Blow coming to terms with who he really is and what he will really do with the rest of his longer than expected life wrapped up in a truly engaging plot and the evolution of this central character is interesting and believable within the fantasy context. There is a romantic thread in this first book which does not factor much until the end of the book, but unfortunately, I think it may be a bigger part of the rest of the series. I say unfortunately because I really enjoyed listening to Rabbit's evolving relationship with his mysterious mentor much more than I enjoyed the more trite romantic relationship with the less mysterious and less powerful girlfriend.

Nigel Carrington is very pleasant to listen to and his voice seems to be a good fit for both the style and setting of the book.

With some reservations about the romance introduced at the end of Sixty-One Nails, I intend to continue with this adventure now that Audible has added two more in the series. Most readers of Urban Fantasy will like this new twist to the genre - recommended.

This book has a lot in common with the Neverwhere novel from Neil Gaiman. If you liked Neverwhere you will like this novel as well. The world is dark and rich. I am not a fan of books about faeries but in this case the author makes it fun and interesting.

It is a novel that is operating on two levels at once. On one hand you have the protagonist trying to deal with all this life changing supernatural drama while dealing with mundane problems such as a shrill ex-wife and a teenage daughter. This is much the same way the supernatural world works alongside and under the real world of London.

There is also a nice romance that occurs throughout the novel. It is well done and adds to the story rather than taking away from it. The narrarator has a pleasing voice and a decent range, but he over emotes a good bit and thus 3 stars instead of four for the narraration. It really doesn't harm the experience and it is more of a personal pet peve more than anything.

One thing to note is that this is the first of several books in this series. The problem is that currently the number 3 book is due for release in audio format soon but the second novel is nowhere in sight. This is a good series, but if you want to listen to this one rather than read I would wait until the second novel is on audio as the books build on each other and should be read in order.

I’m in the position that I liked this complex book so much I’m not sure how to start my review. It is an urban fantasy that centers around the feyre/fey/faerie. It is constructed for an adult audience and is part of a small portion of urban fantasy that does not fall into being overly focused on romance or young adult themes. I found it through Ben Aaronovitch’s recommends on Goodreads. He is the author of the ‘The Rivers of London’ series if you are unfamiliar with him. Sixty-One Nails is a well crafted novel that I fell in love with. Nigel Carrington narrates a fantastic version. He gives a performance with strong character distinction and use of sarcasm and dark humor that in my opinion is worthy of Shevdon’s work.

Niall Peterson is a successful middle-aged business man who recently went through a difficult divorce. His life is a forcibly changed when he has a heart attack in the London Underground on the way to work. He is saved by a reluctant woman named Blackbird, a distinctly odd name, and she is about to introduce him to his new and distinctly unbelievable life. Niall is part Feyre and part human. He doesn’t believe this and who would? His predicament, however, makes it clear she is not lying. She is his only shot at living through the day if the week. He knows he needs and is dependent on her, and she has very little reason to help him. Niall’s story is about surviving. He has to discard his life, quit his job, cut ties with his ex-wife and daughter immediately, and accept he is part human/part Feyre on the run with a new name – “Rabbit.”

The book explores the structure of the Feyre councils. Blackbird as well as Niall are on the. They are considered “tainted.” Having human DNA is not a positive: to have any form of protection Niall must find a way to be accepted by one of the Feyre courts. The 7th court, or “The Untainted” are a select group of Feyre that believe consorting with humans is something to be cleansed and engaged in rampant war with the other courts. They have been sealed off but are gaining access to the world a foothold at a time.

This is a darker book. Mike Shevdon’s version of the Feyre is not kind or forgiving. It, however, is not overly graphic and doesn’t use excessive profanity. In fact I’m not sure there is any. I would recommend this to older or advanced teenagers and adults that have an interest in a suspense novel that is also well crafted urban fantasy.

Note: In this review, I discuss the trilogy as a whole, in addition to main focus on this book. There are purposefully vague references to some of these things below, to provide examples without creating spoilers.
-
Short version: First book is decent, but investment pays off as the next books just get better and better. Book 1 = B+. Overall trilogy = A-. If you’re into contemporary/urban fantasy, I would definitely recommend picking this trilogy.
-
Story (B+): If you like dynamic characters that really grow and change as the story unfolds, then this might not be the book/trilogy for you. If you like urban fantasy that has a pretty cool story, then pick this one up. In that it centers on a normal contemporary guy who tumbles into a surreal world, it’s somewhat reminiscent of Neverwhere (by Neil Gaiman), but without quite hitting the mark. There were few times when I thought it almost got started to approach a similar level of suspense/tension/emotion/thought, but fell just a little short for some reason I can’t quite put my finger on (which is probably why I’m not a writer). Then again, I think it’s really not fair to compare other authors to Neil Gaiman (he’s just too good).
As mentioned right up front, not terribly dynamic main characters—this is primarily a plot-driven book. Fortunately it’s quite an enjoyable plot. At the same time, I’d suggest practicing a little suspension of disbelief… and maybe suspension of a bit of logic too (just a touch). There are odd little incongruities, or at least little things that could be patched up a bit better. For example: Character 3 asks “do you trust me?” Character 2 had been placing trust, headlong, in 3 for the majority of the tale at this point and has not been let down, but for some reason 2 is suddenly skeptical. So, 2 thinks “3 might have good intentions, but also has 3’s own motivations.” But there’s nothing that really changed up to this point to bring about this skepticism. As far as the villains and many secondary characters go, I found them to be perhaps the richest part of the tapestry woven by the story, and would enjoy reading again. The magic system is not terribly outlandish or especially original, but one thing that I REALLY liked was that nobody was leveling forests and towns with god-like power. When magic is employed it is generally more targeted and taxing. Characters are clearly limited in their ability to conjure by some clearly set guidelines (I won’t get into specifics, because everybody hates spoilers). There are also methods of travel and communication, which I found both entirely sensible and fantastically abstract at the same time (one of my favorite bits).
-
Audio (B): The performance was good, but not great. Good tone and pace, plenty clear, good production quality, etc. I thought it would be better to have more range, or incorporation of accents, to differentiate segments of quick conversation that didn’t explicitly specify the speaker. There are fairly long sections of dialogue would go by without a single “he said”… not good for someone with my attention span… anyway, what was I saying? Oh, yeah.. In some conversations with similar voices I got a little mixed up as to who said what.
-
The overall trilogy (A-): The second and third books follow on with the story. The second and beginning of the third are the sections that get into the culmination of previously laid out plot points. That’s when things ramp up, and the whole scope increases (including some of the aforementioned magical capabilities). Basically, we get very well acquainted with the people who can really throw their metaphysical weight around. We also get to learn that some people are more capable, and/or differently motivated, than we (or anyone) had originally assumed. In the first book, I really feel like the whole story is sort of set up and the ball gets rolling a bit. The next two installments are where things come together and happen in a way that made me stop questioning the value of the first book, and say ”Yeah, this was TOTALLY worth it.”