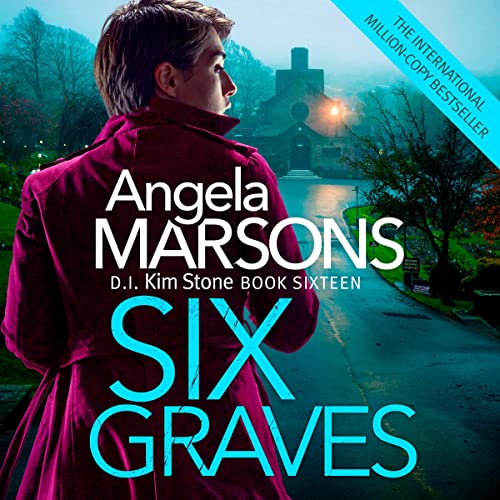 It’s a typical teenage bedroom with posters covering the walls and clothes littering the floor. But the girl lying on her bed, wearing a delicate chain around her neck, is lifeless. A circle of red stains her white vest top. How had the girl’s mother looked down at her sleeping child and pulled the trigger?

When Detective Kim Stone rushes to the scene of a house fire, she’s shocked to discover it’s claimed the lives of two teenage children and their parents. But this tragedy is not quite as it seems. Each body is marked by a gunshot wound, and the mother, Helen Daynes, is holding the gun.

The case sparks painful childhood memories for Kim, who suffered at the hands of her own abusive mother, but it just makes her more determined to uncover the truth. As Kim untangles Helen’s past, she finds a history of clinical depression. But did it drive Helen to murder her loved ones?

Then Kim uncovers a tiny, vital clue in Helen’s bedroom that throws the investigation wide open. Could someone else have killed the Daynes family?

Just as Kim feels she’s making progress, a deadly threat is made on her own life by a dangerous psychopath from her past. Biting back her fear, she keeps digging. And when Kim hits upon a shocking secret that changes everything she thought she knew about Helen, she realizes that the remaining family members are in grave danger.

Kim is under pressure like never before, and the monster circling her is getting ever closer. Four bodies already. Four graves fresh in the ground. Who will be next? Can Kim find the killer and save herself before it’s too late?

An absolutely nail-biting mystery thriller that will have you gasping out loud. You won’t come up for air until you’ve reached the breathtaking final twist. Fans of Karin Slaughter, Mark Billingham, and Robert Dugoni will love Six Graves.

Ive listened to over 1100 Audible books and I wait for each new edition to this series. I feel like I know the characters- wether that is good writing or good narrating … maybe both. Love love love.

Angela Marsons, you have done it again!!!!!! Absolutely bloody brilliant book and brilliant series! Do yourselves a favour and listen to them all!!!!

I didn’t want it to end

Loved it. Best one yet. Leaves me with challenge to MS . Marsons . Can you top this??

Prepare to stay on pins and needles to the end!

the setup…
Detective Inspector (DI) Kim Stone is in the middle of a training exercise with her team when she’s suddenly whisked away by armed police officers to meet with her boss DCI Woodward. Symes, the most sadistic and evil man Kim’s ever put away, has escaped from prison and everyone knows she’s his target. Unfortunately, that means she’s forced to accept protection she loathes and her team won’t be assigned to recapture him. Meanwhile, she and her team are called to the scene of what appears to be the murder suicide of the Daynes family, the parents and two teens. But as they probe deeper, Kim and DS Bryant begin to realize that appearances can be deceiving.

the heart of the story…
I agree, Symes is the worst fictional villain I’ve ever encountered and I hate that he had to resurface, even though I knew it was inevitable. The prologue was just awful, emotionally that is, because it set up the story brilliantly. I won’t say anymore than it far surpassed my fears and sense of foreboding.

The Daynes case was an interesting one as at first it seemed the mother, Helen, had killed her family and then herself. It took some time to call that into question and figure things out but the exploration into the family revealed some themes that hit close to home for Kim. Yes, I’ll be a bit smug about having correctly figured out the truth but was brought down a bit by the shocking motive I didn’t see coming until it was close to being revealed.

the bottom line…
This story was an emotional overload, taxing my nervous system. I struggled to hang in there with the ending only because I lacked courage. Of course, I listened to the book and the narrator did a lot to contribute to the tension and suspense, which really is a good thing despite my being a baby about it. The ending was extraordinary and all I can ask is when are we getting the next book??? Ms. Marsons, you can’t leave me here for long!

This one had me fooled until the end! The narration is superb! Love evert character on Kim's team!

Everything Books in this séries has me guessing while I am sitting on the edge of my seat. I am a major Kim Stone fan. I can’t wait for the next book.

I am a big fan of Jan Cramer as the narrator. Her performance adds so much color to the story.

For the most part I have enjoyed this series but on more than one occasion I have been extremely irritated with the main character as time and again she puts herself into insanely stupid and dangerous situations. This time, I really did want her to die. In addition the case Kim and her team were working on was contrived and basically just a vehicle to get the reader to the last 40 minutes of the book.

Jan Cramer was great as usual but even her wonderful narration could not save this one.

Love Kim Stone series but have to admit was disappointed with last book. Gald to say this one was awesome. 2 intersesting plot lines. Stubborn Stone. Catchy ending. Cant wait for next one.

Glad we left the psycho psychologist out of this one.

as usual I love kim stone books. thus one kept my interest and what can I say well done.