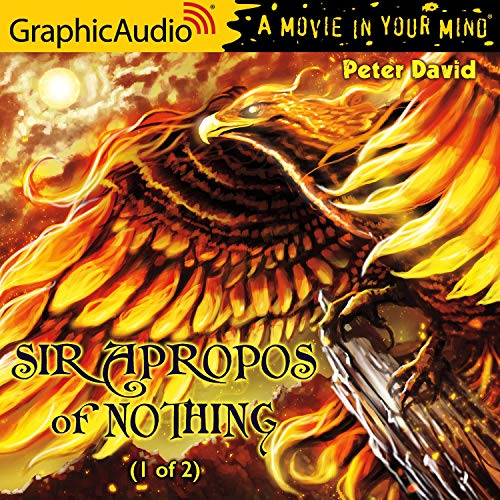 Sir Apropos of Nothing (1 of 2) [Dramatized Adaptation]

In the grand tradition of Blackadder and Monty Python and the Holy Grail is the story of an anti-hero who can't help but find his way to greatness whether he likes it or not.

Apropos is a rogue, a rascal, a scoundrel, a cheat...and those are his good points. Lame of leg but fast of wit, the only reason Apropos doesn't consider chivalry dead is because he's not yet through with it. An orphan with a chip on his shoulder, Apropos, travels to the court of the good King Runcible, with three goals in mind: to find his father, seek retribution for the death of his mother, and to line his own pockets.

However, Apropos carries the most troublesome burden a would-be harbinger of chaos can bear: He may well be a hero foretold, a young man of destiny. It is not a notion that Apropos finds palatable, having very low regard for such notions as honor, selflessness, or risking one's neck.

Yet when Apropos finds himself assigned as squire to the most senile knight in the court - Sir Umbrage of the Flaming Nether Regions, whose squires tend to have a rather short life span - Apropos is forced to rise to the occasion lest he be dragged under-permanently.

Production is good lead is way too much of a dick.

The graphic audio stuff works fine, The different characters and speaking fit the rolls well to my mind.

The problem is the titular character moved beyond the realm of acceptable dick protagonist and well I mean about halfway through this part he tries to rape a woman and they seem to be trying to give the idea that he literally can't comprehend basic human decency. Maybe he improves in later parts, but over halfway through and I can't think of a joke since the opening chapter.

Where has this story been all my life?

This is an anti-hero, satirical fantasy story. while the settings and some creatures are not of this world, the situations and character types are. The fire, outrage, and humor grabbed me from the start and didn't let go. I've already downloaded the next one.

NOT for children, there are a couple of scenes that are intense.