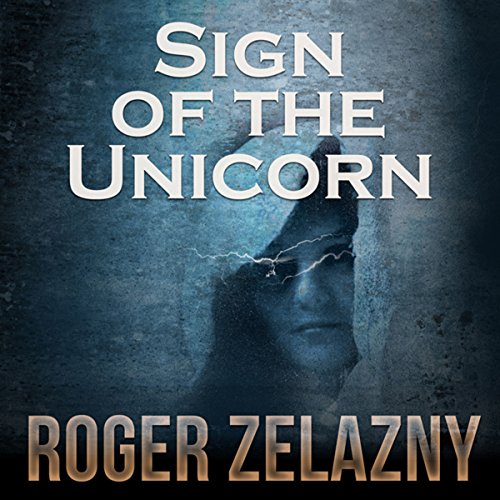 Sign of the Unicorn is the third book of The Chronicles of Amber; an epic fantasy series written by six-time Hugo Award winning and three-time Nebula Award winning author, Roger Zelazny.

The Audible audio rendition of this classic sci-fi/fantasy series is started off by 2012 Audie Award nominee, Alessandro Juliani, who reads the first five books that make up the Corwin Cycle and whose narration vividly brings the world of Amber to life.

Accepting the responsibilities as ruler to the world of Amber, Corwin finds himself the target of sibling treachery, and must seek guidance in a land of visions, where a sinister prediction foretells his doom.

Bring Back The Lord Of Light!

There are a lot of positive reviews popping up in support of this rendition of the Chronicles Of Amber. They are well deserved. Very original and at times very funny. The narration is excellent.

Roger Zelazny also wrote an excellent novel called the Lord Of Light and it was available through Audible in the not too distant past. Right now it is unavailable. As much as I am loving Amber, I think the Lord Of Light might be better and I encourage you all to request it as it is definitely in my top 5 and it should not be lost in the shuffle of publishing rights mumbojumbo. Request on, faithful readers/listeners.

Time for a Family Meeting

"...inside stories seldom live up to one’s expectations. Usually they are grubby little things, reducing down to the basest of motives when all is known. Conjectures and illusions are often the better possessions.”
― Roger Zelazny, Sign of the Unicorn

Another solid Zalzny fanasy novel (they are practically novellas). It is 3/10 in the Chronicles of Amber decalog, or 3/5 in the Corwin pentalogy. The family drama of finding the King/Father and understanding the Pattern, the darkness that is invading Amber. A bulk of the novel centers on a family meeting (a meeting of siblings) in Amber. It allows for stories to get told, and more of the background of what is going on to gradually unfold.

Again, like the previous novel in the series, I'm still kinda luke warm towads it. It is good enough for a diversion, but I'm not seeing anything here that is either hyper-literary or revolutionary. It is B+ escapist fare (so far). Good enough that I have no issue coming back to it between other reads, but I'll have to decide if I want to just read the pentalogy or if I'll actually read the entire decalog. We will see.

Brilliant story, performance could be better with Others voices. Didn't like Randoms and the girls. And no special effects...

&quot;Other&quot; voices are SO BAD.

This narrator's normal voice for Corwin is just fine to listen to. Not great, but nothing wrong with it. His voices for every other character are utterly intolerable Looney Tunes voices. Worst of all is Random. Unfortunately, Random has a fairly big speaking part in book three. It's a cross between Spongbob and Urkel. The only way I could get through it was at 1.5x speed. But, if you like Zelazny, hang in there until book 6 on. The narration gets a much needed change for the better.

The Magic of Amber is there!

What made the experience of listening to Sign of the Unicorn the most enjoyable?

The book is made to be listened to. Zelazny's books are narratives, told by the main character. It's like sitting with Corwyn as he is telling his story.

Off the top of my head, I would say Tolkien's Ring saga. Those books also set an atmosphere where magic is natural and characters are larger than life.

Which character – as performed by Alessandro Juliani – was your favorite?

As in all of the first five books, the voice of the book is Corwyn's. He is my favorite, although I am kind of partial to Fiona, as well.She is one of the strongest female characters in the books.

Yes, the plot is intricate, full of twists and surprises. It is hard to break off the story.th

Would you consider the audio edition of Sign of the Unicorn to be better than the print version?

Corwin is just the glue that pushes this story along.

Tough to pin down just one but I love the interaction between Corwin and Random. Great banter.

As a young man I spent a great deal of my time reading the Chronicles of Amber. I became Corwin in his Adventures to Amber and into shadow. Sign of the Unicorn points us towards the climax of the chronicles. This reading, sorry, performance is just how it played out in my mind. Great job.

Sign of the Unicorn is the third novel in Roger Zelazny’s CHRONICLES OF AMBER. At the end of the previous novel, The Guns of Avalon, Corwin finally got what he wanted: Eric off the throne. Corwin is now the regent of Amber by legitimate claim and he holds the Jewel of Judgment which has powers over the weather and, as Corwin learns, other powers that may be dangerous to its owner.

You’d think that things might now be easy for Corwin, but not so. The forces of Chaos are crossing into Amber from the shadow worlds, and they must be stopped. But Corwin’s most immediate concern is treachery from his scheming siblings. One of them has just been murdered and someone is trying to frame Corwin. During the fallout, other murder attempts occur. It’s clear that Corwin is not safe as long as his siblings are alive, but he doesn’t know which of them he can trust. During his interactions with them he learns a lot of the history that he has been unaware of while spending centuries on Earth without his memory of Amber. These stories slow the action but serve to enlighten us further about Amber, the Shadow worlds, how the trumps and the pattern work, the alliances between the siblings, how Corwin lost his memories, and what may have happened to their father Oberon. Of course, Corwin knows that some of his siblings may not be telling him the truth… Looking for guidance, Corwin visits Tir-na Nog’th, the city of moonlight. Instead of the answers he wants, he receives ominous visions which suggest that the real truth is even more frightening than the petty sibling rivalries Corwin has been dealing with.
Sign of the Unicorn continues Corwin’s swiftly moving adventure. Things slow down a bit during this installment while the siblings tell their stories, but there are lots of revelations and plot twists to make up for that. One thing that’s lacking in these stories, so far, is a sense of what Amber is like beyond of the realm of the royal family. We see very few people who aren’t related to Corwin — not even household servants. The story is so focused on the family intrigue that we really don’t get to know Amber outside that context, which is somewhat disappointing.

Sign of the Unicorn definitely doesn’t stand alone — you need to read the previous books, Nine Princes in Amber and The Guns of Avalon, first — and after the final revelation in Sign of the Unicorn, you won’t be able to stop there either, so plan to have the fourth book, The Hand of Oberon, ready. In fact, go ahead and get the fifth book, The Courts of Chaos, because the end of The Hand of Oberon is a doozy, too.

I read the entire CHRONICLES OF AMBER twenty years ago and am re-reading them now that they’ve been produced by Audible Frontiers. Each installment is rather short (only 5 or 6 hours on audio) which was usual for fantasy novels published back in 1970. Some of them had been previously serialized before being released in book form. The AMBER CHRONICLES are short and entertaining, but the length of each volume is something I’d consider when deciding whether or not to spend an Audible credit on them, especially since there are 10 books in the series (divided into two ARC). They are relatively inexpensive, though, and they’re certain to show up in Audible’s frequent sales. Alessandro Juliani does a great job with the narration — I really like him.

Originally, I listened to this series many, many times in the abridged format, since the recordings were out of print and I could not obtain the unabridged format. The series was read by the author. The master recordings were found, according to the first two unabridged audiobooks read by Roger Zelazny that I have on CD. I love this storyline, and have often wondered how the author conceived the series, since it is unlike any other. This series is even mentioned in the Nightside series by Simon R. Green. (Listen carefully, when the Amber Prince disappears along with the diner). However, after hearing Mr. Zelazny read these audiobooks, it is quite hard to listen to the new narrator. I miss the gravely intonations, and the narration that Mr. Zelazny wrought. I do not like Random's voice, especially since the character - well, just listen and you will find out what happens. Bottom line, this series is a must have, no matter the narrator.

Though the voice acting is quite good, Zelazny’s third entry into the Amber series is a bit of a bridge between books 2 and 4.

Really not much happens at all in this one. Though the ending is good enough, both the beginning and middle don’t offer much meat on the bone; but that’s not to say the meat it provides is bad, it’s actually fairly good.

In my opinion the narrator is awful.I Hate the voices he uses for each character.