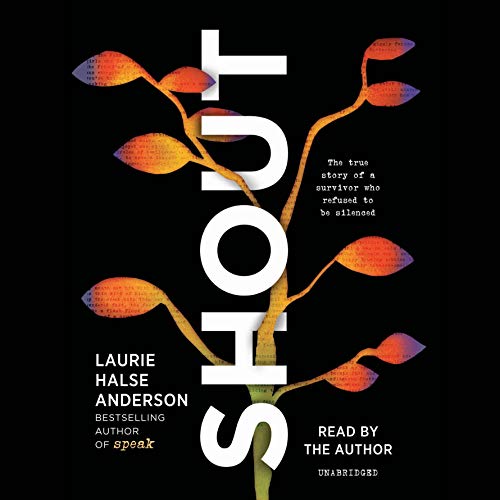 A New York Times best seller and one of 2019's best-reviewed books, a poetic memoir and call to action from the award-winning author of Speak, Laurie Halse Anderson!

Best-selling author Laurie Halse Anderson is known for the unflinching way she writes about and advocates for survivors of sexual assault. Now, inspired by her fans and enraged by how little in our culture has changed since her groundbreaking novel Speak was first published 20 years ago, she has written a poetry memoir that is as vulnerable as it is rallying, as timely as it is timeless.

In free verse, Anderson shares reflections, rants, and calls to action woven between deeply personal stories from her life that she's never written about before. Described as "powerful", "captivating", and "essential" in the nine starred reviews it's received, this must-listen memoir is being hailed as one of 2019's best books for teens and adults.

A denouncement of our society's failures and a love letter to all the people with the courage to say #MeToo and #TimesUp, whether aloud, online, or only in their own hearts, Shout speaks truth to power in a loud, clear voice - and once you hear it, it is impossible to ignore.

"In this powerful memoir told in free verse, Anderson delves into her past.... Her potent words and willingness to shout her message are proof of the soundness of that advice." (Publishers Weekly)

"A captivating, powerful read about clawing your way out of trauma, reclaiming your body, and undoing lifetimes of lessons in order to use your voice as the weapon it is. Fervent and deafening." (Booklist, starred review)

"Readers new to Anderson will find this accessible. It's a strong example of how lived experience shapes art and an important book for the #MeToo movement." (Kirkus Reviews, starred review)

A touching story that resonates with all those hurt

This story is one all abused can resonate with, a sincere piece that gives us all our own light in the dark. A reminder that eventually we can heal we can be ok and that regardless of our pasts or how we’ve been hurt not only are we still loved, but that there is help for us and hope for us. A future that doesn’t have to be weighed down or feel like we’re locked in a cast of cement. We can chip away and heal our wounds slowly but surely. This is an amazing story overall. Sorry to rant but it is really an amazing piece.

Great messages and very personal. She tells hard truths about taboo topics for those who need it most: the youth who often do not have access to authentic knowledge about sex, consent and the crippling emotions inappropriate actions can cause.
However, I found the style of writing, poetry, made it harder to understand. I imagine many young men/boys would probably not understand the full message, or not bother to go to the work of reading and untangling the clever word smithing. And they are a group who truly needs to hear these messages loud and clear.

Vulnerability and power are synonyms

Speak was put into my hands by a collage professor 17 years ago. It led me first to pick up a pen, then to begin to feel, then to slowly start speaking all that was within me to say. Today, I can laugh and sing with a joy and freedom I'd never known before! When I heard that the author was publishing a memoir I immediately preordered the audible edition, narrated by Laurie herself. I was so gripped that I stayed up far too late, unwilling to silence her even for a few hours. And of course, the next thing I did was pick up my pen again. Inspiring, visceral, eloquent, vulnerable, and above all, powerful.

This book was so moving. The author does such an incredible job expressing the raw emotions of what it truly is like to be a survivor. Thank you, Laurie, thank you so very much.

Brilliant. Powerful. Anderson’s biography in verse. A wonderful listen and listen again. The insidious violence against women and children.

didn't live up to my expectations

I struggled to finish this one. I really was expecting more considering how great "Speak" was.

must read that you should not look away from

this is a book that every father brother or spouse should read or listen to as hard and personal as the subject matter is. It is a window into the complexities of victimization that is at once raw and endearing and maddening for those of us who can never fully comprehend the fundamental short and long-term effects that rape has on a person.

Every single word is therapeutic, this book needs to be shared with everyone, even if they aren't a survivor.

this is for everybody

Beautiful, poignant and approachable poetry that is raw, and written with the honesty and wisdom of a survivor of sexual trauma. If I had a high school literature class, I'd make this assigned reading.